On Tap: Your Friday Drinking Instructions

Share All sharing options for: On Tap: Your Friday Drinking Instructions

We love beer. It's just a fact. Beer is mankind's greatest creation, and yes, I'm counting the wheel, the Saturn V and the DVR. Beer just makes everything better. Including football. In fact, football is so much better with beer that the Minnesota State Legislature is currently debating a bill which will authorize beer sales at da University of Minnesota's brand spanking new, and currently alcohol free, TCF Stadium. So, as we will do every Friday until it's time to kick off the season, Maize n Brew will provide you with a malty, hoppy, delicious beverage to purchase and imbibe over the weekend, so that you may share in our love of beer.

Last week, along with calling Beauford a communist, we humbly suggested you purchase and enjoy Bell's Amber Ale, a wonderful Ale that maintain's its taste without being overpowering. We enjoyed several over the weekend and now have the rounded, well nurished looked goin' on. We like it. Mrs. Brew wants me to get my fat ass to the gym as a result. I think after this week's suggestion I might not be able to argue with her any longer. 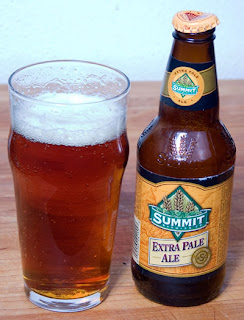 In honor of our patriotic, beer drinking brethren in the Great and Heavy Drinking State of Minnesota, we're picking a Minnesota Brewery. Located out of St. Paul Minnesota (where my grandfather was born and lived), the Summit Brewery delivered it's first Keg of beer on September 25. 1986. Right in the middle of Football Season, God Bless them. If you've gone to a bar in the summer, no doubt you've seen the SBC's Extra Pale Ale on the beer menu. Easily the brewery's most popular beer it's got a crisp flavor with a surprising little bite at the end. Not as surgary as other EPA's, so I'm a fan.

Let me know your thoughts after you've claimed your first of the weekend.