Big Ten Armespansion: Survival of the Fittest in the Big XII

Share All sharing options for: Big Ten Armespansion: Survival of the Fittest in the Big XII 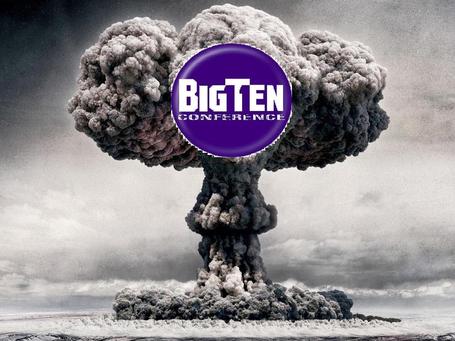 Over the past few months the focus of any Big Ten Expansion chatter has been on who will go where and why School X belongs or doesn't belong in the discussion. But at a certain point, the bomb is going to drop and there will those who are swept up in the fiery inferno and those that are left behind. All anyone wants to talk about is who will go, but not a lot of people want to talk about who is left.

At this point in the discussion, the schools that are left over after expansion happens and what happens to them will is just as compelling a story. Base on all the published reports, interviews and common sense, the two most vulnerable conferences to the expansion bomb are the Big East and the Big XII. And what happens to the schools that are left to deal with the fallout is a subject no one seems to want to talk about.

There are four schools that appear primed to leave the Big XII: Texas, Missouri, Nebraska and Colorado. Each have their own reasons to leave or stay, but each has a different effect on the conference if they leave. The biggest wildcard in the deck is Texas, the undisputed financial King of the Big XII. If Texas is the only school to leave the conference it would be a damaging, but not necessarily fatal blow. At eleven teams, and with the biggest impediment to addressing conference revenue sharing out of the way, the Big XII would likely pilfer TCU, Utah, or maybe even Arkansas to reform itself with a solid base of historic schools and even distribution. Likewise, if Nebraska, Missouri, or Colorado left, individually, the Conference would soldier on without forfeiting too much of its identity or long term revenue (this, of course, assumes Texas stays put).

However, should Missouri and Nebraska leave for the Big Ten, it is almost a given that Colorado would bolt for the PAC-10 by January 2011. That would leave Texas in the unenviable position of financially propping up a nine team league. It's fairly conceivable that Texas would then pack up shop and head to the PAC-10 with Colorado or to the Big Ten with Nebraska and Missouri. You can make an argument they might even head to the SEC, though I doubt that would happen for reasons not germane to this discussion.

That leaves the Big XII with eight members, an identity crisis and without three of it's major bread winners. So what happens next to Texas A&M, Texas Tech, Baylor, Iowa State, Kansas, Kansas State, Oklahoma State, and Oklahoma? Can the conference survive or will it go the way of the dinosaur?

There is no doubt in anybody's mind that the fault lines between member institutions in the Big XII run deeper and more volatile than the San Andres. "I love the Big 12," said Missouri Head Coach Gary Pinkel, "But there are issues, no question. The TV package (without revenue sharing), that is staggering. ... It's the right thing to do; it makes your league stronger. And for some reason, there are people in our league who can't figure that out. And so that's a problem." On the flip side, you have University of Texas AD DeLoss Dodds, who will support a Big XII network, so long as it doesn't get in the way of a Longhorn Only network.

Texas people would rather be able to go to the Texas network and catch all of our sports and all of our events and all of our academic side rather than going to the conference network, where one-twelfth of the inventory will be Texas.

That sums up the current culture in the Big XII. Even with the vultures circling the conference, its members can't even pretend to put up a united front in its defense. Sadly, it's inconceivable that the Big XII will never have the consensus needed to do survive in the long run. The Big XII's present revenue sharing insists on half the football television money being distributed evenly, while the other half is divided up based on TV appearances. As a result, the haves will prevent the have-nots from ever changing the system. While it's not quite serfdom, at a certain point schools will revolt. And it appears that time is now.

Whether this round of expansion does the Big XII in is really academic. Unless the conference undergoes significant financial reform, the subsequent rounds of conference expansion following the Big Ten will finish the Big XII off.

Survival of the Fittest

When the league collapses, there are only a few schools with any real hope of remaining at a BCS conference level. At the top of the remainders sit the Kansas Jayhawks and Oklahoma Sooners. Both are national athletic powers and both have highly profitable athletic departments. Critically, each has a national championship calibre program in one of the Big Two sports (football and basketball), allowing them some cache to bargain with as they search for a new conference. Kansas pulled in $86 Million in 07-08, ranking 11th among Bowl Subdivision Schools. Oklahoma pulled in $77 million, ranking 17th. Clearly, both have something to offer any potential suitors.

With regard to Oklahoma, it's most logical landing place is the SEC. While a good institution, it is not enough of an academic or research powerhouse to attract interest from the Big Ten or PAC-10. However, its name, recruiting, and football history seems like a perfect fit for the SEC. Just spitting distance from Arkansas and LSU, easy natural rivalries would sprout or be reborn. Athletically, Oklahoma would benefit from the SEC's recruiting rules which resemble the current Big XII far more than the more rigid Big Tenor PAC-10. Oklahoma's national appeal and style of play would be great addition to the SEC and it's hard to think of a better fit for the Sooners if the Big XII collapses.

Kansas is a little more difficult to place. Along with BHGP, I think Kansas would be an excellent fit for the Big Ten. Unfortunately, little has been said about the potential for the Jayhawks joining the conference. As a result, we're forced to discuss where else they'd go outside the conference. Like Colorado, and even Texas, I can see the Jayhawks in the PAC-10 as the Pacific based conference swells to 14 to 16 schools before this is all over. Again, academically, athletically, and geographically, the PAC-10 makes more sense than the Big East, SEC or ACC. Like with the Sooners, Kansas won't be looking for a new conference for very long.

Texas A&M - It wasn't too long ago that the Aggies were one of the more feared programs in college football. Despite the Aggies' fall from football royalty, their bottom line hasn't been hurt too bad. With Athletic Department revenues at $74.5 Million in 07-08, the Aggies ranked 21st nationally. A&M's success on the diamond and hardwood would bolster there chances of inticing a conference to scoop them up. The big question becomes whether A&M is tied at the waist to Texas. If so, the PAC-10 seems the logical landing place. If not, there remains the possibility that A&M could join the Mountain West Conference along with Boise State in anticipation of a new BCS conference filling the void of the Big XII. The Aggies would add some credibility to the MWC's BCS autoqualification bid, and they would immediately step to the top of the conference.

Oklahoma State - So long as T. Boone Pickens keeps writing checks, the Cowboys are going to be a school worth considering by a conference. Like Oklahoma, OSU seems destined for the SEC. Pulling in $88 Million in 07-08, Oklahoma State may not have much in terms of name recognition, but they have strong athletics and the resources to compete. Like their in-state rival, OSU is a good but not outstanding academic institution. Also like Oklahoma, the Cowboys seem better suited in the SEC than PAC-10. However, like A&M, they could pull up stakes and try their hand at launching the MWC into a BCS conference. Of the three in this category, I think the Cowboys are the most likely to end up in the SEC.

Texas Tech - Despite the Red Raiders success over the past few years, they will definitely be without a major conference home if the Big XII implodes. They are no where near academically strong enough to qualify for the PAC 10 and they are too far west for the SEC. Of this group, Tech seems to be the strongest bet to join the MWC due to location, athletics and academics. And frankly, it could be a win-win for the MWC and Tech. The Red Raiders immediately become a league leader, benefiting from being out of the Big XII South, and the MWC gets a BCS conference school to boost its claim to an auto-bid.

Kansas State - I struggled with putting K-State in this category, but when I thought about it I couldn't come up with a potential major conference home for the Wildcats. I couldn't. Academically, Kansas State isn't a powerhouse. Athletically, since the mid 90's K-State has been mediocre at best. God-awful at worst. And there doesn't seem to be a lot of hope that it will change. This is an outsider's perspective, so take it FWIW, but I can't think of a major conference that would take K-State in. They're not a good fit for the PAC-10. Too far west and north for the SEC or ACC. The Big East, well, we'll get to them tomorrow. That leaves two conferences geographically situated to take K-State: The Mountain West and Western Athletic Conference. Neither are where K-State can see itself, but the best result is for the MWC to shed a lower tier school in favor of the Wildcats. And when BCS credibility is at stake, there's a good chance that will happen.

What I foresee as the ultimate result of the Big Ten's expansion push is the death of the Big XII and the expansion of the PAC-10 and SEC. The natural pull of these other conferences on the Big XII's surviving schools, combined with substantially better revenue sharing policies, will finish the conference once and for all.

Is it set in stone? No. Not at all. If the revenue sharing policies are changed and the conference only loses one or two schools to expansion (BT, ACC or SEC), then it's conceivable the Big XII would survive in a diminished capacity. However, if the current policies remain in place it's hard to imagine the remaining have's of the conference sticking around when there are larger slices of pie awaiting them elsewhere. The conference "haves" want to remain national "haves", and the only way to do that is to ensure your Athletic Department is on the cutting edge both athletically and financially.

And after the Armespansion Bomb goes off, these schools will have to move quickly if they not only wish to survive the fallout, but prosper from it.

(You can follow our continuing snarky coverage of Big Ten Expansion here.)