Some statistics in this wonderful game of ours probably get a little too much "play" in terms of how much of a role they play in success on the gridiron, for example time of possession, but there are others that do seem to carry some weight.  I'd argue that this is the case with Red Zone Offense, particularly when you're the University of Michigan Football team who managed to finish... wait for it....

116th in the nation in Red Zone Offense last year

The other statistics involved in that ranking are as infuriating as Michigan's inability to punch the ball in from the one yard line against Illinois last fall (where the season officially fell apart by the way). 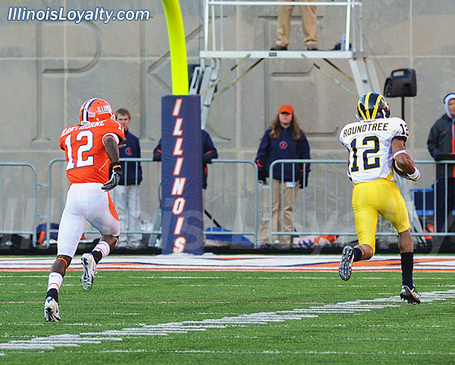 This somehow makes Michigan's 41st ranked scoring offense seem a little more impressive than I would've originally given it credit for.  This also means that of the Maize and Blue's 48 touchdowns last season, a whopping 47.9% came from outside the 20 yard line.  Where the statistic of "red zone offense" somehow falls short is that it essentially treats any score in the red zone as equal, which of course they are not, 7 points tends to be more than 3 points, etc, etc.  So the statistic leaves out one of the old "truisms" of football where settling for field goals tends to be a recipe for disaster (see Michigan v Texas in the Rose Bowl or Michigan v ND in '04... arrrrrrrrrrrg), I mean who cares if you score 96% of the time you're inside the 20 if 80% of those scores are for 3 points?  So, what if we examined TD's only?  We'll call the stat RZTD% just for the heck of it, the number in parenthesis is the team's national rank in overall red zone offense, [EDIT: I failed to mention that  these numbers are gleamed from the NCAA statistics site, my apologies] :

How about Wisconsin?  95% red zone percentage, and they scored a touchdown 75% of the time they were inside the 20?  What?  Really?  I'll happily admit I wouldn't have guessed that.  So there's a number of things with this list that we can pull out right away...  Iowa and Ohio State both have fairly weak red zone offenses in terms of TDs scored (we probably would've guessed this anyway) and yet finished very high in the conference standings where it mattered (yay Defense and FG kicking).  Meanwhile, Purdue and Illinois occupy two of the top three of this list in terms of percentage, but occupied the bottom of the conference where it mattered.  Of note, Purdue and Illinois also had two of the fewest number of opportunities inside the red zone, which probably goes a little ways towards explaining their records.
More after the jump....
From the above list alone it's fair to say that RZTDs are not exactly a direct correlate to success in terms of W's and L's, though it would be interesting to parse it out into performance in wins vs performance in losses.  So here are those numbers from Michigan's seven losses last year, with a quick caveat: rather than just simply using the box score red zone scoring opportunities stat, I checked it against the drive charts for each game.  In several games there were some things that didn't match-up, for example our turnover on downs on Purdue's 18 yard line was not counted as an opportunity in the redzone, despite the ball being spotted on the 20 during the possession for 3rd down, so anyways onward:
Totals: 16 for 25 (64%) with 10 TDs and 6 FGs, so the RZTD% in these losses was 40%.  Interestingly, Michigan's overall red zone percentage (66.7%) was only a small bit better than what they managed in the losses (64%), however, the RZTD% dropped from an overall 52.1% to 40%.  Also incredibly alarming, is that Michigan turned the football over in the red zone a staggering seven times in these losses, this accounts for a whopping 77.7% of their failures inside the 20 in these games...  I mean, wow.  Yes I'm counting turnovers on downs as turnovers, because, well they are.
I think it'd be difficult to draw an overarching conclusion here other than the fact that it's important to put points on the board when you're in the red zone, and preferably those should be TDs... which yes, the sun is hot and the sky is blue.  Where I think this is interesting however, is that this is an area where Michigan was clearly deficient last season on a unit that many are predicting to be the strength of the squad this season.  Again, Michigan finished the season with the 3rd best scoring offense in the conference (and yes, we all know that includes Delaware State, blah, blah, blah) and 41st overall in the country, and they managed that with easily one of the worst red zone performances of any team in the nation, let alone the conference.  Intuitively I think we all would've guessed that our red zone performance wasn't the greatest last season, but I certainly didn't realize it was this bad either.  Turnovers played an enormous role, as did injuries along the O-line (see Illinois...), but all in all this is a symptom that, if resolved, could be something that takes this offense from "improved" to "dangerous" this season.  An improvement of just 10% in this RZTD statistic would've seen the Wolverines score nearly five more TDs last year.  Five TDs would've gone an awfully long way in a few games wouldn't they?
I don't proclaim to have the easy answer outside of HOLD ON TO THE FOOTBALL inside the 20, but in a season where we need the offense to make another big step, it's pretty apparent that one of the highest yield areas would be to focus on what we do with the ball inside of the other team's 20, because again, even an improvement of only 10% in that area would've resulted in nearly 35 more points last season.