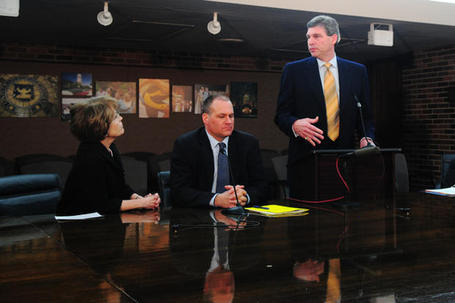 I suggest a campus wide ban of Free Press employees (via www.michigandaily.com)

This morning the University of Michigan released its response to the NCAA's notice of allegations, in the event you've missed it, the actual document can be found here.  Cliff's notes: reduction in practice hours over the next two years by a total of 130 hours, quality control staff reduced from five to three and banned from practices/meetings for remainder of 2010, no loss of scholarships, no loss of actual coaches.  From a Michigan fan perspective, this response is simultaneously fantastic and sad.  Sad because we find ourselves in this position in the first place, as the document itself states:

There will be icicles in Hades before USC can ever manage to type a sequence of letters and words that approximates those lines.  To even have the school and program mentioned in the same breath with another program that has so blatantly and recklessly violated NCAA rules repeatedly and on such a large magnitude has been infuriating and insulting over the past several months.  It's embarrassing, regardless of just how minor we feel all of this has been.

The reason why it's fantastic is that while the response admits full responsibility for several of the alleged violations, it also takes the time to fully support, with evidence, just how borderline these violations actually were.  It throws no single individual under the bus and has spread the blame across both coaching staff and administration/compliance staff.  The University admits that this should not have happened and outlines the steps it will take to insure that it does not occur again.  Personally, I feel that the self-imposed sanctions were perfectly appropriate for the scope of violations that occurred.  The University and Dave Brandon have clearly taken a stance of support behind Coach Rodriguez on this issue, and they've done so in a more emphatic way than many outside of the Michigan sphere would've guessed leading up to this release.  It's exactly as Dave said in his article yesterday, if the school felt Rodriguez had been in the wrong and committed a major violation, he would not be here right now, that's how it works at Michigan.  They wouldn't have waited for any kind of action from the NCAA.

Some highlights of the violations as outlined in the Michigan response (emphasis mine):

The football program exceeded the daily CARA limit by as much as one hour on eight occasions, and on just one of those occasions the daily overage caused the University to exceed the weekly limit... BY 20 MINUTES.  While the University takes the violations very seriously, the actual violations are a far cry from the initial claims in the media.

We're looking squarely at you hacks of the Detroit Free Press...   Later on in the response, there are more details regarding the overages of practice time:  The 2008 violations resulted due to time spent lifting weights on Sunday not being included in the CARA limit, thus causing them to exceed the daily maximum of four hours by as much as one hour, in turn the program exceeded the weekly CARA limit once in 2008, by 20 minutes.  In 2009, the football program exceeded the daily maximum on each Monday by 15 minutes, due to a failure to include warm-up and stretching time.  Had the students warmed up and stretched on their own, the football program would not have exceeded CARA limits.  Next:

[Regarding the Quality Control Staff violations] The violations at issue occurred not because the quality control staff acted as additional coaches in their every activity (this they clearly did not do), but because they crossed the line in specific situations and engaged in "coaching activities" as defined by the bylaws.

The paper goes on to state that the University Compliance Services Office had questions about the quality control staff's duties and responsibilities in 2008.  Judy Van Horn, Associate Athletic Director, requested Scott Draper, Assistant Athletics Director for Football,  to produce written job descriptions for each quality control staff in the summer of 2008.  The footnotes in the document state that despite repeated requests for these written descriptions, they did not receive them until after the media investigation broke the story in 2009, and that these descriptions did not contain some of the activities were cited as violations.  This, in particular, sounds damning for one Scott Draper.  Interestingly, Scott Draper has been with the school for 19 years, and was promoted to Director of Football Operations in 2002, well before Rodriguez ever arrived on campus.  This is not someone Rodriguez brought in when he arrived in Ann Arbor.

So it would appear that there are a number of parties at fault here, and in fact, there are.  The introduction summarizes the violations thusly, again emphasis mine:

The University acknowledges that separate from the monitoring issues, two types of violations occurred between late January 2008 and November 2009: (1) exceeding the limit on permissible coaches under Bylaw 11.7, and (2) violations of the restrictions upon CARA under bylaw 17.  After thorough joint investigation with the Enforcement Staff, the University has concluded that violations occurred for an extended period due to an inattention by the football staff, the CSO's failure to contact Rodriguez directly about these issues, ineffective communication between the CSO and the strength and conditioning staff, and the failure of athletic administrators to perform the tasks the CSO requested.

Like I said earlier, the blame falls on many parties involved, not simply Rich Rodriguez... and I'd probably read "athleltic administrators" as Scott Draper, but that's just me.  The detailed sections on each allegation do a nice job of both ascribing fault and simultaneously emphasizing just how borderline most of these infractions actually were.  Example?  Certainly:

Bylaw 17.1.6.2.1 states that only strength and conditioning staff who perform their duties on a department-wide basis may conduct voluntary workouts. Even if the quality control staff members were classified as strength and conditioning staff when working in the weight room or conducting skill development in the summer, they nonetheless violated Bylaw 17.1.6.2.1 because they worked exclusively with football student-athletes.

In fact, in those sections it becomes abundantly clear that these various violations are not something you can simply lay at Rich Rodriguez's doorstep and walk away.  There were a number of mistakes involved in many of these violations, and a number of people responsible for those mistakes both within the football program and within the administrative/compliance department.  This has to be frustrating at some level for many who were championing the "bring down Rodriguez he's ruining this program" mantra that, while over-represented by the media, certainly has existed both within and outside the fanbase over the past several months.  It's frustrating from a fan perspective because from a 10,000 ft view, it's easy to see how a number of these could have been prevented rather simply.

Adam Rittenberg had a thorough response to the statements this morning, and one point stood out in particular among a number of relevant thoughts:

Head coach Rich Rodriguez has more support from the university that many folks think, and though these historic violations occurred on his watch, he's anything but the fall guy here. In fact, Rodriguez doesn't come off looking too bad at all. [...]   I think it's significant that several of the people reprimanded don't have firm ties to Rodriguez and were at Michigan during the previous coaching regime.

This is a key point, and one that likely is leading to a certain amount of consternation for certain writers at a certain newspaper in Detroit that likes to run hit-jobs that don't contain a shred of journalistic integrity.  It certainly doesn't fit their agenda that Rodriguez is a rogue coach running a rouge program.  That said, the University does not absolve Rodriguez of responsibility, in fact stating that they believe Coach Rodriguez should have known that some of the quality-control staff activities were impermissible.  Later on, they again bring Rodriguez to the forefront:

The University cannot say whether Rodriguez knew the CSO requested job descriptions for quality control but is of the opinion that if he did not have actual knowledge, he should have known about the request.  [...] The University is aware of no information suggesting Rodriguez knew or should have known to inquire as to whether the CSO had received the quality control job descriptions.

So we have this: someone asked for job descriptions of QC staff, this request went both to Scott Draper and Rich Rodriguez's assistant, as apparently Rich Rodriguez does not have an institutional email address, and no one got back to the CSO with these descriptions until after the newspaper "investigation".  Obviously there was quite a breakdown in the chain of communication here, and I'm sure many will point to this as a sure sign of a cover-up of obvious impropriety.  That said, the University takes full ownership of the violations, and so it does not seem so improbable that the request simply was lost in the shuffle as far as Rodriguez goes.  It appears that the classification of QC permissible activities and that of full strength and conditioning staff also are at the heart of these specific violations.  This, to me, does not constitute wanton disregard for NCAA rules and a blatant abuse of student athletes.  It represents a violation that simply should not have occurred, one that the school and program admit should not have occurred, and one that I'm certain will not occur again.

That attitude permeates the response to each individual allegation.  The document mixes no words and pulls no punches.  It details each and every violation.  It frankly and simply states where violations occurred, why they believed they occurred, and what will happen to insure they do not occur again.

So where do we go from here?  Well we focus on W's and L's for one thing, we move on.  This is Michigan's response in its entirety, so from the University's stand-point they are done.  We now wait for the NCAA's response to this document in August, and I would be literally stunned if there were to be anything additional added other than a symbolic probation period.  Beyond that however, several questions need to be asked.  First and foremost centers on access to the program.  The original articles that detailed this "investigation" were gross misrepresentations of the program and Coach Rodriguez along with the nature and types of violations that occurred in 2008 and 2009.  They were irresponsibly reported and have brought untold amounts of negative attention upon both the University and the football program.  With the full weight of the allegations and violations now out in the open, there is no other conclusion to reach other than the fact that the Free Press mis-represented and falsely reported the extent and details of the violations that occurred.

The University was direct about these violations and addressed them head-on repeatedly.  This document today serves as the final punctuation mark in the school's response to the NCAA, but it should be only the beginning in their response to the local media, and by that I mean the Detroit Free Press.  The Free Press should be banned from attending U of M events in total, remove their credentials, remove their access, and remove their relevance from covering the University of Michigan.  There should be some method of recourse here, and I believe that a removal of the Free Press's privilege to cover U of M events in person and to have access to U of M players and staff is the place to start.  Where to go from there, I do not know.