Rodriguez Was First In Line With Ultimatum To Notre Dame

Share All sharing options for: Rodriguez Was First In Line With Ultimatum To Notre Dame 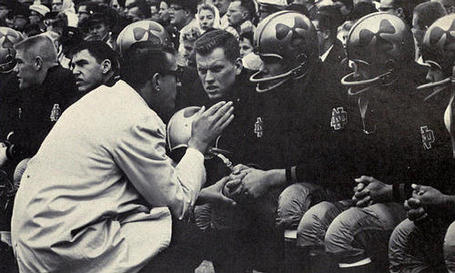 "Now remember guys, we won't have to wear these "Magically Delicious" football helmets for another 40 years. At that time we'll have joined an insignificant athletic conference called the Big East.  We'll accept their ultimatum, but they will have accepted ours - Nuclear Lucky Charms helmets!!!"

Last week a UConn football Q&A session with Huskies head coach Randy Edsall included comments describing how most of the Big East conference football coaches and  administrative officials have been considering issuing some sort of "ultimatum" to Notre Dame athletics regarding their Hokey Pokey dancing approach to the question of  Big East Conference  affiliation, or any conference affiliation.

"Love it or leave it, Notre Dame!"

Actually, "Get in or get out" was the message.

Big East  football coaches are probably right to worry about what the future holds for the conference's chemical makeup. Like agitated, uncomfortable electrons, Boston College, Virginia Tech and Miami (FL) veered off and out of their shells and into a more comfortable environment in the ACC.  Recently Big Ten officials have been spouting off about they've been hungry to expand the league by a ridiculous number of teams all along, and how a choice really needs to be made soon, are you listening Notre Dame?, and so forth.

Edsall and his colleagues are not saying anything new here.

In 2002, West Virginia football coach Rich Rodriguez expressed similar disdain for the way Notre Dame seemed to skirt the edges of the Big East conference membership and still get the best of both worlds. That year the Mountaineers (9-3) had finished second in the Big East conference race only to get kicked out of the promised New Year's Day Gator Bowl matchup and be replaced by Notre Dame (10-3).  Rodriguez and his team were relegated to face Virginia in the Continental Tire bowl on December 28th.

"I know this agreement was made earlier," Rodriguez said. "I'm just a football coach and our players are just players, but we don't understand some of the political things. I don't understand why Notre Dame is getting the best of both worlds.  "I think the Big East is a great league and we can stand on our own. In my opinion, Notre Dame either needs to get in or get out."

Yeah. Confusion and anger. It sounds so familiar.