Big Ten Armespansion: The Nebraska and Colorado Bombs Have Been Dropped, Next Comes the Fallout

Share All sharing options for: Big Ten Armespansion: The Nebraska and Colorado Bombs Have Been Dropped, Next Comes the Fallout 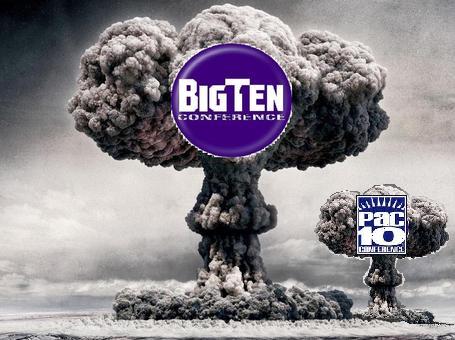 It finally happened. Those crazy bastards out west finally pushed the button. In an instant the Big XII was gone. In the blink of an eye! What happened to the survivors... well... they wished they'd disappeared like Nebraska and Colorado.

You can draw just about any post-apocalyptic movie metaphor you want this discussion and it will be apt. Big 10 expansion and Pac 10 expansion are happening, and the first bombs in of the great football conference war of 2010 have been dropped. Nebraska apparently has a Big Ten invitation and will announce they're joining the Big Ten on Friday. The Pac 10, who decided a pre-emptive strike was more palatable than the uneasy expansion glasnost between it and the Big Ten, has claimed Colorado as its own and appears to have designs on the State of Texas. Rumors are Pac 10 tanks are massing on the Texas border. There has been no conclusive word weather they will be welcomed as liberators or repelled as invaders. You are encouraged to purchase bottled water, batteries, and canned goods, then pile into your basement for the foreseeable future.

With two of the most willing participants in the expansion push now safely in their new shelters, everyone's attention rightfully shifts to who is left. The two biggest prizes in the expansion war, Texas and Notre Dame, remain uncommitted to any particular future.

To some extent, Texas' hand has been forced by their northern neighbors. With the Big XII deader than a trunk full or rocks, Texas needs to act quickly to ensure that it retains as much sway and revenue as it did before. Of the schools main suitors, the Pac 10 and Big 10, Texas would seem to be a better academic fit in the Big Ten. On the other hand, Texas non-football athletics are far more of a natural fit in the Pac 10. Of course if the discussion were that simple, we wouldn't be having it. The "poison pill" Texas' suitors will be forced to swallow is the inclusion of two other Texas schools (Texas Tech and Texas A&M) in any move UT makes. While the Big Ten would likely welcome A&M with open arms, the conference seems to have drawn the line at inviting Texas Tech. The Pac 10 has not been so uncompromising, and as a result appears to have the upper hand on the Big 10 toward gaining expansion's biggest prize.

This is not say that the Pac 10 will emerge a winner solely on the basis of adding the Longhorns. Though Texas brings a heavy financial stick to this fight, the added burden of A&M and Tech (though both have loyal, devoted followings) heavily dilutes their overall impact. With Tech and A&M in the Pac 10 fold, that's two additional mouths to chomp away at the financial buffet Texas will produce, without either school bringing much to the table financially. And, of course, this begs the question of whether Texas' move to the Pac 10 will come at the expense of the Conference's equal revenue sharing system or at least with some heavy concessions.

Texas decision to align itself with its stateside neighbors weakens their ability to dictate terms as forcefully, and seemingly dictates where they will end up. The dye may not be cast yet, but it's getting close.

Hundreds of miles North and East, expansion's other big prize, has yet to see its hand forced. The fallout from the Nebraska and Colorado moves only effect Notre Dame in a BCS revenue sense, not in its everyday course of business. Though the collapse of the Big XII might effect the Irish's BCS contracts and Bowl money, it effects little else. With the Irish still in bed with the Big East for its Olympic and non-revenue sports, the Big East's continued viability means Notre Dame's position hasn't changed one bit despite the upheaval in the west.

But that doesn't mean Notre Dame is out of the woods yet. At this point it seems readily apparent, both in the papers and in information I personally have gathered, that the Big Ten has no intention of stopping at 12 teams. And that should make the Irish very uneasy. Big Ten Commissioner Jim Delany remains fixated on the New York City DMA, and Rutgers appears to be his best shot at obtaining a foothold there. If the Big Ten were to invite the Scarlet Knights, it's a guarantee they would accept, thus depriving the Big East of one of its 8 football schools.

At that point it's anyone's guess whether the Big Ten would go for the Big East's jugular and extend an offer to Syracuse as well. Who am I kidding? Of course they will. If that happens Notre Dame's viability as a football independent goes by the wayside due to the impact the Big East's demise will have on their other sports. Notre Dame's Athletic Director Jack Swarbrick has admitted as much previously. With Notre Dame vulnerable, you have to believe that the Big Ten will do everything it can not only to match the Pac 10's expansion plans, but to secure a prize it has lusted after for twenty years.

Nebraska and Colorado's defections from the Big XII have set of a chain of events that have foreseeable consequences, but there are no certainties as to what happens next. If Texas, Texas A&M, and Texas Tech defect to the Pac 10 along with Oklahoma and Oklahoma state, then college football will be left to deal with the remaining five former Big XII schools without homes. Despite a BCS win and national championships in basketball, the University of Kansas appears totally without suitors. Missouri, despite early reports of a Big Ten invitation, appears to be on the outside looking in at the Big Ten party. Kansas State, Iowa State and Baylor have basically been consigned to the MAC/CUSA/MWC, or maybe worse as no one is talking to any of them.

The first bombs have gone off. Several more are falling. The fall out from them will change the face of college football as we know it.