The Simple Truth on USC: They were "Begging for Trouble"

Share All sharing options for: The Simple Truth on USC: They were "Begging for Trouble" 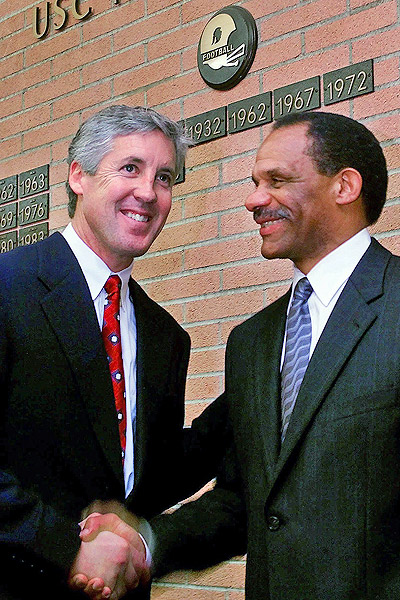 "How could we have known?"

Yeah, like seriously, how in the world could they have known?

While listening to ESPN 710 yesterday, the host of the program quoted a very telling comment on Twitter from San Jose Mercury News sports columnist Tim Kawakami:

"Covered a few USC games in that era--Locker room after games was crammed with hangers-on & other parasites. Begging for trouble."

Aside from winning lots of college football games, Pete Carroll did indeed do some tremendous things for USC and the Los Angeles community. I think he's a good person who genuinely cares about his players and loves to coach and have fun. However, as great as Pete Carroll was, his USC legacy is going to be forever changed by this disgrace.  "Yeah, but USC cheated!", they will say from now until eternity.

Reggie Bush and Pete Carroll are now in the NFL earning millions of dollars in entirely new endeavors, but following this devastating hammer blow from the NCAA, the question must now be asked:

Was it worth it?

Was it really worth it? There's a lots of ways to break NCAA rules by improper recruiting methods, not accounting for coaches and player practice hours, gambling on events, or just taking money.  But to audaciously break NCAA rules by allow sports agent access, cash "playments", plane tickets and real estate benefits from sports agents to players and family, and then many other illegal gifts all while feigning eligibility, well, that's just plain dumb.

More importantly, the actions by Reggie Bush, Pete Carroll and Mike Garrett now unfairly punish an entire roster of young USC recruits who were mostly freshman and sophomores in high school when all of this brazen stupidity occurred.  They had absolutely nothing to do with Reggie Bush and sports agent shenanigans.

The NCAA penalties will seriously affect USC's football program in the coming years.  There can be no doubt about that.  It's not SMU's penalty, but come 2012-2013 USC's symptoms may appear very similar.  As for USC football players and USC fans, apparently it's just a little too much to ask cocky Mike Garrett, Pete Carroll and Reggie Bush to take it like men, fess up to their ineptitude and greed and just apologize. They don't get it.  They set a poor example which has been publicly exposed, and the slaps in the face keep coming as they act "shocked", lack shame and evade responsibility.

What should worry us more is whether young athletes today can look at what has happened at USC with Pete Carroll and Reggie Bush (who may lose his Heisman Trophy because he was ineligible) and how it registers with them. What lessons are being learned by all of this?  The message I'm getting from the USC AD, former head coach, and former star player is that they are being treated unfairly and that they did nothing wrong.

When you act in improperly, get caught and things start to go wrong, deny it, and blame it on someone else. Or someone else's envy.

Maybe it's just me, but I think this is a horrible lesson to teach the next generation.

What's badly needed now is for someone in the former USC regime to finally accept responsibility and issue a formal apology. That would be the right and honorable thing to do not only for themselves but for the tens of thousands of fans who love college football.

Unfortunately, given what we've observed over the last several months from the likes of Garrett, Carroll and Bush, USC fans - and all college football fans nationwide - are highly unlikely to ever receive anything of the kind.