Greed is Good: How Greed Almost Destroyed and in the End May Have Saved College Football... For Now

Share All sharing options for: Greed is Good: How Greed Almost Destroyed and in the End May Have Saved College Football... For Now

Then, all of a sudden, everything changed. And everything was back to normal.

In the scope of a week the Big XII has gone from 12 members, to 10 members, to deader than a sack of doornobs, to on life support, to a 10 member super conference that has more money at its disposal than the faltering Russian economy. How it all happened is a bit of a mystery to everyone involved. The financial opportunities offered by the Pac 10 and the Big Ten seemed insurmountable. Yet, somehow, dead man walking Dan Beebe escaped from the train and Tommy Lee Jones and caught the one-armed man who killed his wife conference. 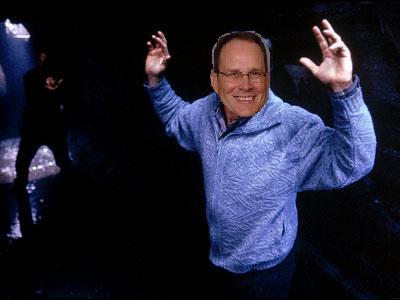 I didn't kill my Conference!

No, you didn't Dan. Somehow you kept it alive. In looking at the numbers I'm completely in awe of Beebe's pursuasive skills. When a conference loses one of its biggest media markets and one of its biggest draws, television revenue rarely goes up. It's even rarer that this kind of money increases when you lose your championship game. Despite this, Beebe has concocted a story that will (on average) equal $169 million dollars in tevelision revenue. And apparently they have a willing suitor to supply this bounty.

According to SI.com and Andy Staples, Fox Sports is the major reason the Big XII stuck together. Staples obtained a copy of Dan Beebe's confidential memo to member institutions through a FOIA request to the University of Colorado, and in that memo Beebe outlined who and how the cable deals in the future would make the conference richer, and perhaps, stronger. 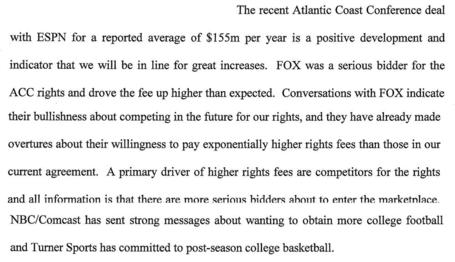 Taking the $155 Million ACC deal as a starting point, Beebe has promised or indicated that Fox and/or ESPN and/or NBC/Comcast will pony up the cash to make the Big XII one of the most profitable college football conferences in the country. Yet none of this outlines these media giants' bids in writing. In fact, there are people going on record saying there is no new TV deal in place or even in writing.

Texas sources are saying it came down to the "known v. the unknown", whatever the hell that means. But what it really came down to is greed. Good, old fashioned American greed. The new deal has less to do with a new deal than it does with how any deal will be distributed. Rock M Nation, SB Nation's outstanding Missouri Blog, has the details on what kept the Big XII together after all. According to The Trib (Dave Matter):

A source with knowledge of the proposed deal said the agreement would not only be centered around unequal revenue sharing but described it as a predetermined three-tiered structure, where Oklahoma, Texas and Texas A&M will represent the first and most lucrative tier with the chance to generate as much as $20-22 million in league revenue per year. The second tier would consist of Oklahoma State and Texas Tech, who would generate around $17 million per year. Finally, the bottom tier would consist of the other five schools: Baylor, Iowa State, Kansas, Kansas State and Missouri. Their range of revenue was described as between $14-16 million.

I'll be interested to eventually hear Alden's and Pinkel's take on the new agreement and the tiered system as described above. If so, it was clearly a concession to Texas and the other Pac-10 flirts that, ironically, could make the Big 12-minus-2 richer but more divided than before.

Wow. Despite all the haranguing about unequal revenue distribution, the league not only kept the status quo, but made it even worse (in terms of distribution). Still, if the numbers that are being thrown around by Beebe hold true everyone in the conference stands to gain a significant amout of money. And that's why the conference is being held together. Not because of any noble goal or last second plea to everyone's heart strings, but for cold hard cash. it also explains why A&M did a sudden 180 on the SEC. Despite playing .500 football for the last decade, the Aggies stand to double their television income in the next decade.

For anyone under the "Big Three", the prognosis apepars much less rosy. Everyone will decry the unequal treatment of schools like Missouri and Kansas, and the king's ransom Texas, A&M and Oklahoma received, but every school in the Big XII will receive a financial windfall if this thing goes through. All of a sudden schools that were looking at CUSA membership are now looking at doubling their conference revenue despite being nothing more than a glorified punching bag come September (Baylor, Iowa State). It's simply amazing, and greed is what made it happen.

Greed was what brought us to the point of arguing over what rivalries were "worth saving". It made brothers, albeit brothers who really don't like each other, actively look to split apart. It made Twitter the best possible news outlet on the planet, despite the fact that there was rarely any real "news" to be had.

So here we are. A Conference named the Big XII with ten members and a television deal worth in excess of $155 million a year without an oral contract much less a written one. A Pacific conference that almost expanded from ten teams to sixteen without any fanfare, but is now stuck at eleven. A Midwest conference named the Big Ten with twelve members and an identity crisis (I suggest renaming it "The Twelver"). And through it all, Notre Dame stands untouched with its NBC contract in hand, content that there's more money to be made as an independent than in a conference.

And it's all thanks to greed. It saved college football from itself.