Share All sharing options for: Big Ten expansion/sub-conferencization and how Texas deftly played the Bill Snyder card it had up its sleeve all along

So, as Dave has already suggested, it appears for a second as though the initial galatic conference end game that would have resulted in the formation of several titan conferences with limitless wealth and power has fizzled for the time being.  With this brief pause in what has been a ridiculous news cycle for the past few weeks, it's probably time to sit back and evaluate where we stand.  Everyone has a take, and everyone's take pretty much falls into the following two categories:

I, as you probably already have guessed, fall into the second camp and look forward with great anticipation to the inaugural '97 Crystal Ball Trophy Game between Michigan and Nebraska, and if that's not the trophy then we clearly don't know how to create trophies any more... unless of course it's the Sun Belt Referee Effigy trophy which is the only acceptable substitute if you ask me.   Regardless, without writing an entire tome, the Big 10 pulled off a rather incredible coup by bagging the best available program, one that can match the depth of football tradition and success that resides within the conference, and one that isn't going to rock the boat with a prima donna attitude, and best of all they don't have a Matthew McConaughey problem, which is a bonus. 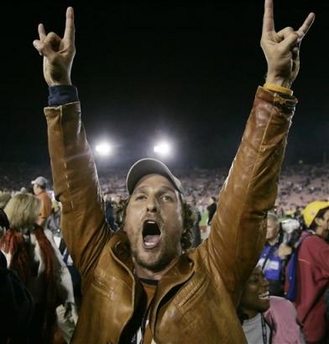 So, with all of this going down Texas took a look to the West and said "we don't want to share money with everyone and have to play games at 10 pm!"  Then they looked East and said "we don't want to play a tough schedule!"  Next they looked to the North and said "we don't want to play a tough schedule and share money with everyone!"  Lastly they looked in the mirror and reached the only logical conclusion one can arrive at after making those three statements: "we like tomato cans and money!".  Texas no longer has to play a conference title game, still gets to keep its neutral site "rivalry game", and can reduce its schedule from essentially one or two tough games a season to quite literally maybe one which opens the road for more wins, more BCS bowls, and more money.  Texas gets to achieve Notre Dame-like scheduling without losing a conference BCS bid in the process along with getting its own ND-like TV deal.  Pretty logical decision really.  Bill Snyder and Michael Bishop approve with hearty nods Texas, well done indeed, for you've taken the late 90's K-State model of OOC scheduling up a notch and applied the theory to an entire conference!  Obviously some of this is in jest, but after dialing back the sarcasm if you take a look at the Big 12 landscape right now, which team can hold a candle to the Longhorns?  Oklahoma?  Ehhhhh....  UT has taken 4 of the last 5, Texas Tech just lost their Pirate Coach, Oklahoma State will continue to be Oklahoma State (they have a contract with Texas in which they're spotted 28 points at the outset of each meeting, but nowhere in the contract does it say anything about winning), and frankly I don't know who else is really worth mentioning at this point.  Texas "wins" but does so in a way that makes the rest of us scowl.

So now what do we do with the Big 10?  Clearly the 12 team conference demands a championship game and that also demands divisions.  How those divisions are made will not necessarily fall purely to geographical reason as Brian points out from Jim Delany's take on the subject today:

"First priority’s competitive fairness to me," Delany said last week. "Second priority is maintenance of rivalries, some of them are very important. They’re part of who we are and they’re not treated lightly. And then I think the third is what factor, if any, does geography play?" --

One thing that needs to be discussed would be whether or not the number of conference games in total should increase along with the number of teams in the conference, a move from 8 games to 9 games would likely allow for more flexibility in the creation of the divisions and more ability to preserve traditional rivalries without necessarily having to include the two teams in the same division.  Some might protest that this number of games makes for a likely rematch in the Conference Championship game, however, that possibility is already likely with the existence of 3 inter-division games as things stand right now.  Then again if we do that, then what's the difference between the old Big 10 and the new Big 10 +2?  You'd play everyone but 2 and have those rotate, why even have divisions at that point?  Oh yeah, money.  Obviously this isn't going to be the easiest riddle to solve, but one thing is certain, the distribution of power within the divisions is going to be a difficult thing to make equitable.  This, easily identifiable in hindsight, is where the Big 12 screwed up.  The majority of the power of the conference was located in the South division, even when Nebraska was still a team to be reckoned with.  This is something the Big 10 will need to avoid like the plague.  I don't pretend to have a logical answer right now, but I do have a couple of questions:

With all due respect to Brian, you can't name the divisions "Bo" and "Woody" and then place Michigan in the "Woody" division, that's just plain wrong on all levels.  I like what many, including Delany, have suggested, that the foremost determining factor be equal competitiveness in the divisions.  This means you can't top-load one division with Michigan, Ohio State, and Penn State.  My completely biased view of the way the conference breaks down right now:

I think that the most tempting thing, from my biased perspective, is to keep Michigan and Ohio State together along with Michigan State, Northwestern, Indiana, and Purdue.  This leaves the geographically orphaned Penn State to join Nebraska, Iowa, Wisconsin, Minnesota, and Illinois in the other division.  Is this something I think HAS to happen?  No, not in the least, but it at least makes some vague sense for the time being, kinda, maybe?

Naturally, after typing this I discovered that Misopogon over at mgoblog has come up with a MUCH more thorough and well reasoned approach to the divisions than my chicken scratching on a cocktail napkin above...  I highly suggest you take the time to read through his proposal, well done indeed.