Jim Harbaugh Communes With Greek Deities, Or So He Says

Share All sharing options for: Jim Harbaugh Communes With Greek Deities, Or So He Says 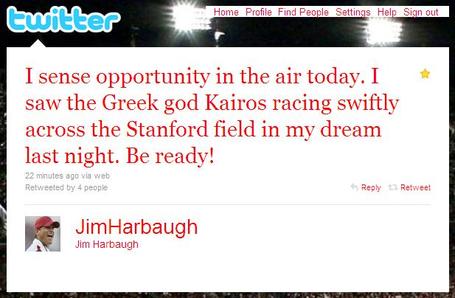 Ah, Twitter. How many different ways do we love thee? You give us Anthony Wright's prolific twittering of eclectic thoughts. You give us Pete Carroll swagging on Golden Tate's late night snacking habits. But most importantly, you give us a direct USB port to Jim Harbaugh's wonderfully chaotic mind.

Somewhere under that sweat stained Cardinal hat there is something going on that NASA would like to study. We're not saying that we haven't had the occasional conversation with Dionysus, but usually that occurs after we've been drinking (heavily) and on some weapons grade mescaline. To each their own. But we don't doubt for a second that Harbaugh requires no additional stimuli to visit Olympus and share a biscuit with Kairos.

For those of you unfamiliar with Kairos, according to the Greeks he was the god of the "fleeting moment," "a favorable opportunity opposing the fate of man." "Fleeting moments," much like players committing to Stanford.