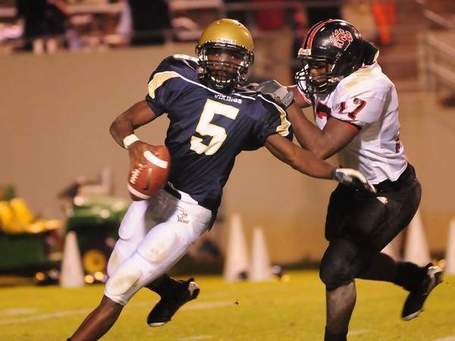 Maize n Brew gives you your daily (or semi-daily) rundown of all the Michigan Football, Michigan Basketball, College Football, and College Basketball news you need to get through the tedium of your boring desk job. For good measure we'll throw in a little irreverent information, comedy and commentary to help you salt away the time until the clock strikes 5pm.  We're on a Facebook and Twitter drive, so be our friend or follow us! If you don't know what that means, you're old. If you want Maize n Brew in 140 characters or less, follow us on Twitter! Or you can friend us on Facebook and become a fan of Maize n Brew on Facebook for more links. Here's what's ON TAP:

God Dammit - Scout.com: Conelius Jones' Coach on Jones' situation - According to Spartanburg SC Head Coach Freddy Brown, U-M signee QB Conelius Jones did not qualify academically and will not be on campus this fall. This brings the magic number of non-qualifiers to three (Jones, Demar Dorsey and Antonio Kinard). /rant on/. Not to add to the fire, but this is getting ridiculous. I understand that Rodriguez is recruiting "football" guys, kids that will devote themselves to the game, but we've got to get these guys through the front door before they can contribute. /rant off/. In all fairness to Rodriguez, this isn't a new thing at Michigan. Just like with Dorsey there was Marquis Slocum, so both coaching staffs had their issues with players not living up to their end of the scholarship deal. It's just tough seeing three kids in a single class get the academic boot. Brice's Recruiting, a new-ish Michigan-centric recruiting site, has a little more on the story.

Evaluating the Mechanics of Big Ten Quarterbacks - Tate Forcier - The Rivarly is back to their evaluations of Big Ten quarterbacks and their mechanics. Not surprisingly, Forcier comes in for a "C-" following a rough freshman year. Ball security was and will remain an issue with Forcier until he proves otherwise.

ASC Wrap Up | University of Michigan Solar Car Team - A hat tip to Brian for linking the original story in the first place, but I wanted to follow up on this. For those of you who don't know, The University of Michigan Solar Car Team is an entirely student-run organization whose purpose is to design, finance, build, and race a solar-powered vehicle in competitions around North America and the world.

They also win races. Lots of them. The Michigan SCT won its Third Straight National Championship, as their car "Infinium" crossed the finish line 2 hours 12 minutes and 9 seconds ahead of the second place team Minnesota. UM won by over two hours. Additional photos from the event can be found here. Go Blue.

Summer Bowl Projections - Nothing like Bowl projections.... in June. No. Nothing can go wrong here. TRE does a post-expansion, post-USC suspension look at the bowl projections. Michigan is projected to the Outback Bowl, FWIW.

Michigan football player Steve Schilling on Outland Trophy watch list - Woo. Pre-season meaningless watch lists! Woo. That aside, I'm counting on Schilling to have a big year for Michigan and pancake some foo's.

Better Know An Iowa Football Opponent 2010: Penn State Nittany Lions (Part Two) - BHGP is doing real blogging, and they're breaking down Iowa's opponents one at a time. This week a shared opponent, Penn State, pops up on their radar screen. Definitely worth your time.

When the Honeymoon's Over - Big Red Network goes over the first group of Big Ten opponents they're going to have to hate. At the top of the list, Ohio State.

Realignment casualties: Bid farewell to Oklahoma-Nebraska - I always did like watching Nebraska's quarterbacks run roughshod over the Sooners. Sad to see a rivalry game like this go the way of the dinosaur, but oh well, our lust for consuming all of the resources this planet has to offer begins with consuming Nebraska. Tomorrow the WORLD! MUHAHAHAHA!

Purdue at Notre Dame: A must-watch game on opening weekend - This could be such a wonderfully delicious trainwreck. We can only hope.

The NHL draft went by with a number of Michigan players or recruits getting scopped up. With No. 38 pick in the 2010 NHL Draft, the New Jersey Devils selected Michigan incoming freshman Jon Merrill. New Jersey loves Michigan players, and after all the nonsense involving Merrill's "off-ice" immaturity it's actually a great sign that he was picked by New Jersey. The Devils have an incredible knack for nuturing young talent as well as letting them spend all four years in school whenever possible. I couldn't think of a better fit. Also on the block, Sophomore defenseman Lee Moffie was selected 188th overall by the San Jose Sharks and with the 197th overall pick in the draft, the Colorado Avalanche selected incoming freshman forward Luke Moffatt.

Wolverines in the National Hockey League - 18 former Wolverines hit the NHL free agent market on July 1st including Cup winner John Madden. Two of the biggest names (Mike Comrie and Marty Turco) are unrestricted free agents. It'll be interesting to see where all these guys end up.