On Tap: Your Friday Drinking Instructions

Share All sharing options for: On Tap: Your Friday Drinking Instructions

Ah, Friday. The day when the work week ends and your liver starts screaming for mercy. To that end, it's time to supply you with the means to do deliciously horrible things to yourself. To wit, we give you, 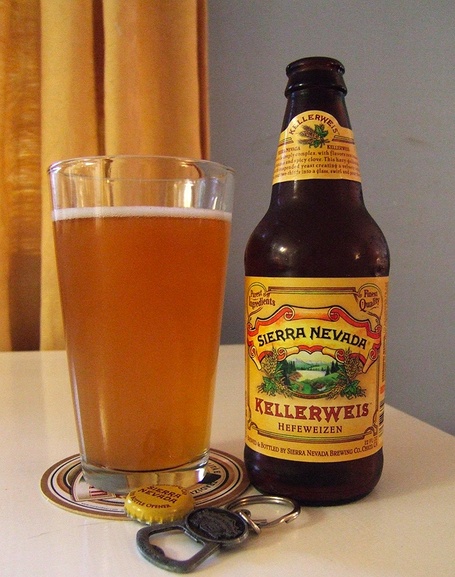 Normally we use this space to pimp Big Ten local brews, but since we're talking expansion and making fun of the Pac-10 and expansion right now, we might as well give their due when it comes to brewing good beer. As our buddy Kyle McCann't describes it:

The Kellerwies is a good, old fashioned Bavarian style wheat bier that strictly adheres to Bavarian fermentation procedures. Why does this matter? Because Germans know how to brew beer. That's why. Dumbass. Like all good hefeweizens, and I mean good, Kellerwies actually has some taste and some oomph. Most American attempts make you feel like you're drinking bread. This is not one of those beers. It has a hint of fruit in it, but that doesn't dominate the flavor. It's beer. Good beer. And it's an outstanding beer for drinking with friends. It also ain't too bad if you're drinking for sport either, but the calorie quotient and hangover this little bastard will give you should rightfully dissuade you of that notion. It's a summer beer that still tastes like beer. As always, you'll pay a little more for this than a twelver of Miller Lite, but it's so worth it.

So go forth, my minions, and imbibe. As always, report back when you've had your fill.