The Solution to the Big Ten's Expansion Problems: Make Pitt and Rutgers Merge

Share All sharing options for: The Solution to the Big Ten's Expansion Problems: Make Pitt and Rutgers Merge

That's right. Merge. After a week of crazy speculation regarding just about everything this makes as much sense as anything else. If BAYLOR can hold up Texas, Texas A&M, Texas Tech, et al.'s move to the Pac-10, logic has ceased being a relevant part of this discussion. So let's start suggesting things that actually make sense... for the Big Ten, that is.

No matter what happens in the west with Nebraska, Texas, the Pac-10, and Baylor, the Big Ten's eyes remain firmly planted on the East. With one of it's more successful schools, Penn State, holding down the east flank of the conference all by its lonesome the Conference is rightfully exploring east coast expansion. However, there is no slam dunk expansion candidate. Everyone is critically flawed. Pitt is athletically awesome, yet can't bring any new revenues. UConn is athletically okay, yet delivers no territory worth considering. Syracuse is UConn, just located in the State of New York. Nothing makes sense out East. Except merging schools.

It's the perfect solution. And it'll save college football for those who care about it. Neither Rutgers or Pitt is going to get an invite to join the Big Ten on their own merit, but they both have qualities that the Big Ten relishes/will kill for. Pitt's got a great athletic department and is the most logical geographic fit not named Notre Dame. They've got natural rivalries with Penn State and.... er... Penn State. But, as we all know, they don't give us any new television revenue. The solution to that is so obvious. Merge Pitt with Rutgers.

Rutgers has the AAU membership the Big Ten relishes and they possess the location the Big Ten is so keen on chasing (sort of). While the Scarlet Knights don't exactly possess a football or athletic jugernaught, they do have some history so we'll look past their current issues. If they combine and join the Big Ten, all of a sudden the Big ten is at 12 teams, the conferences are saved, and college football lives on in all its miserably conflicted glory!

Combine the two. Gold, baby. Solid gold. We've even got your logo all set. 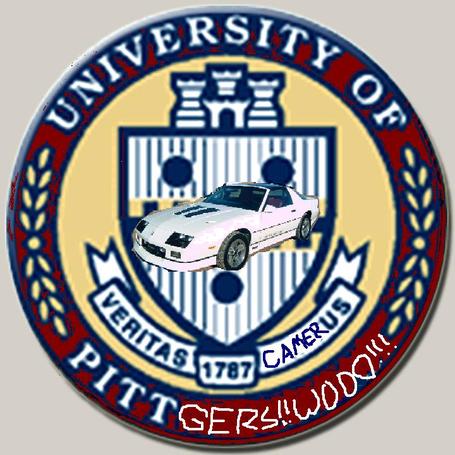 I can hear the complaints now: But Dave, what about the geography? They're 352 miles apart and in different states. One's a state university the other is private. We hate each other. Waaaaaaah Waaaaaaaah Waaaah

Boo hoo. Don't stand in the way of progress. Don't hate. Celebrate. Think about the rewards! We're talking about a 60,000+ student body, with the resources of two separate states. An athletic budget that would rival Colorado's and combined athletic revenues that would crack the top ten in total profitability. Think about it: the Pittgers Scarlet Panthers.

Here' s the real issue: Location. Since no one really wants to live in Pittsburgh or New Jersey, we've decided that Pittgers should be located in a more desirable market area. Namely, New York City.

The campuses will be combined and relocated at the expense of the States of New Jersey and Pennsylvania to the middle of Central Park. I mean there's all that land there, and it's just aching to be built on. I totally can't believe no one's built there yet. I bet we can get the land cheap if we pay in Euros. Hey, and there's that ice rink in Central park already, Give 'em a year or two and we can turn that into a dual purpose basketball/hockey arena. Yeah. You can see it. It's coming together.

Next, where do they play football? The Meadowlands, of course! It's a natural fit for the New Jersey/Pittsburgh based alumni. It's a short drive, right? You'll love it! There are some serious benefits here Rutgers fans. If you combine with Pitt, people will actually show up to your football games! Sort of. Well.... look at it this way, you'll at least reach half capacity.

This works out for everyone. Pitt and Rutgers finally get to play in a conference people care about. Joe Paterno gets an East Coast rival. The Big Ten gets New York. And College Football as we know it is saved. Except for the Big East. But then again, who cares.