Sun Belt Conference to Expand! Will Add Texas, Notre Dame, Rutgers, and yes... Baylor (if they have to).

Share All sharing options for: Sun Belt Conference to Expand! Will Add Texas, Notre Dame, Rutgers, and yes... Baylor (if they have to).

(Someplacedownsouth) - In a shocking development, the Sun Belt conference will soon move to invite Texas, Notre Dame, Rutgers and Baylor to join their conference. Multiple sources sitting out by a 7-11 in Gainsville confirmed that this could totally happen.

Face it, people, the Sun Belt is the way of the future. You've seen the Census data, everyone's moving to the sun belt. Within ten years your entire population will be old and crippled while ours will be young, vivrant, and robbing your old crippled asses. Even ESPN says so, all your best players are from the south and soon you won't even be able to play sports anymore because everyone will be living here. So why fight it? Join us. Join the Future.

In addition to attaching photographs of the respective presidents with farm animals taken at last year's University Presidents' Retreat on Fire Island, Wright addressed the rationale behind the seemingly ecletic groupd of invitees.

Let's be honest here. You want to keep your gate revenues and your network agreements without having to share. That's fine. We're offering Rugers because, no matter what, the Big East is dead soon anyway and all our pensioners want to be able to convince their spoiled New York/New Jersey kids to visit. It's two fold, New York Market plus disposable income spent on football as an enticement to get people to visit our humid little hell holes. All of a sudden Texas and Notre Dame get New York and the American Southeast, Rutgers gets to keep pretending it's relevant, and we get a little piece of that pie.

Plus, you also get what you've always wanted: a string of tomato cans lined up as "conference" so that you can make your national championship case. It's win win, right?

Our sources also provided us with a copy of the Sun Belt's new logo. 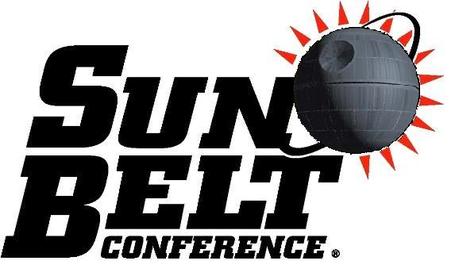 However, the question remains,  why Baylor?

Yeah. We'll take Baylor, if we have to. But they'll really dillute the quality of play in our league. I can't believe we have to dump Western Kentucky for them, but we'll hold our nose and do it.

The Sun Belt has given these schools until Monday to respond to their offer. It may not make sense, but it makes about as much sense as anything else out there.