First let me say that Golden Tate is one of my favorite college players of all time. I mean that. He was one of the most electric receivers I've ever seen. But in some strange way, it's kinda funny to know that he's human after all. I mean when it gets late, you need a snack on a Saturday night. Personally, I prefer a slice of pizza. Tate apparently likes a like night crawler.

Tate was found by Seattle police inhaling donuts at a Seattle donut stand Saturday night, well after business hours (i.e., 3 AM). The Cops, apparently enthralled with the cornicopia they discovered, declined to arrest Tate and the business owner had a sense of humor about the whole situation and declined to press charges. (HT: CC) I'm happy that nothing serious came out fo this, and hopefully Tate got a good wake up call. Just a common sense note to Golden: the football field is where you should "dive right in," not a rack of glazed. 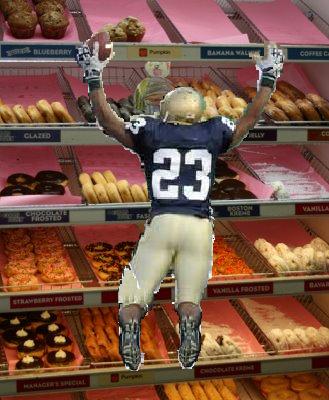