Share All sharing options for: Your Hate Makes You Strong: Players Michigan Football Fans Will Learn to Hate in 2010 - UMass' John Griffin

It's still the off-season and college sports news is, at best, sparse. So to pass the time we're making up our own news. In that vein we're previewing portions of the University of Michigan Football Team's upcoming 2010 schedule. Specifically, we're previewing the most dangerous players on each team Michigan will face this year. Some will be on offense, some on defense, and all of them will be players worthy of your scorn. We've got a full 2010 football schedule, so we'll break down the key cog to each opponent one at a time. We've already covered UConn's starting QB, Zach Frazer and Notre Dame's stud WR Michael Floyd. Now it's time to move on to the September 18th visit from D1-AA Massachusetts /hangs head in shame/, and their dangerous running back John Griffin.

Who Is He, Exactly?

Griffin will be a senior at UMass this season after transferring from Northeastern at the close of the 2009 season. As D1-AA doesn't have any real transfer restrictions, so following a 1,000 yard season and the graduation of UMass' top rusher, Griffin should step in as the Minutemen's primary rushing threat. Griffin ran for 1,009 yards on 207 carries with five touchdowns, while catching 25 passes for 178 yards during the 2009 campaign. Griffin was also named First Team All-CAA (Colonial Athletic Association), Northeastern's Most Valuable Player and Most Improved Player and was named to the 2009 New England Football Writers Football Championship Subdivision All-Star team. So he's a good back at the Championship Subdivision level.

So, Explain Why We Should Hate Him

It's arguable that Griffin isn't the best player on his own team, with two teamates (linebacker Tyler Holmes and tight end Emil Igwenagu) getting press as pre-season All-CAA picks. However, Igwenagu isn't going to touch the ball as much as Griffin and Holmes has to deal with Michigan's veteran line. Griffin is going to get the ball. A lot. On that basis alone he's worthy of your scorn.

But there are other reasons. He's D1-AA. We don't like D1-AA teams around here. They're nothing but bad news. All that can happen when they come to town are awful things. There is no glory no matter the outcome. Sometimes this happens: 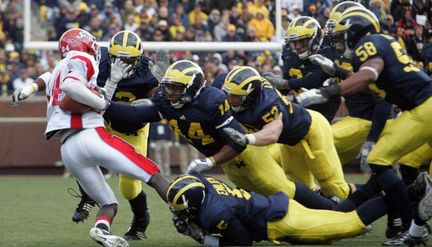 Other times this happens: 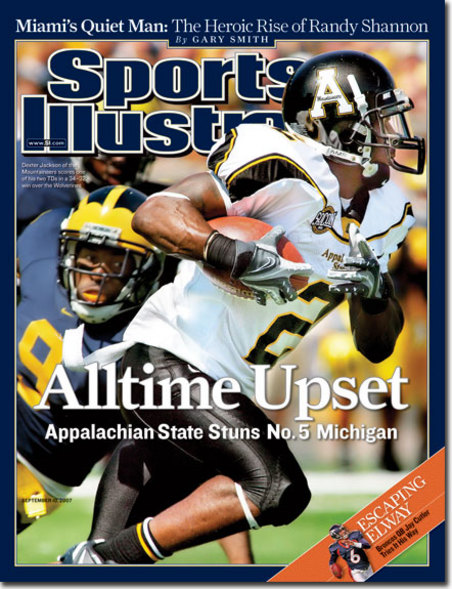 No. I won't let this go. It will always remain relevant when discussing D1-AA teams. And it should make you mad enough to hate.

Therefore you must hate him with the heat of 1,000 suns. I will leave it at that.

Give Me His Weaknesses, So That I Might Exploit Them

Uhhh... Well he plays at a D1-AA school. He transferred from Northeastern to a D1-AA school. He playing in a system he's never played in. He's fast, but not elite level fast. Despite playing in 11 games he only accounted for 5 touchdowns and only broke 100 yards four times. One of those times was against 2-9 Towson when he went for 200. And he just transferred to a team that went 5-6 last year. Additionally, UMass lost their best lineman to the NFL draft this year, so the blocking will not be as good as it was last year.

He's an average speed(ed) D1-AA back playing in a new system, with a line that's taking a step backwards, on a 5-6 team. There are your weaknesses.

You now have your reasons. Focus your hate.