Ten Additional Improvements To Michigan Stadium That Should Be Considered

Share All sharing options for: Ten Additional Improvements To Michigan Stadium That Should Be Considered

Now that the luxury boxes are in place and complete, many people are rejoicing at the completion of the Big House renovations. For those of you that are, I say "not so fast my friend." There are still many glaring omissions that remain to be dealt with after Michigan Stadium's recent face lift. And these are things that must be addressed. Now.

We're givers here at Maize n Brew. That's just who we are. So, in an effort to be as helpful as we can to our new leader, Michigan Athletic Director David Brandon, we've compiled a list of further upgrades. A "honey, do" list if you will for our fearless leader. We know Dave's been pretty busy since taking the reigns, and there are only so many hours in the day to go through and personally make a punch list of additional renovations (despite the fact we have it on good authority he sleeps only 15 minutes a day and recharges his titanium plated V-12 heart with solar panels rigged to the top of Schembechler Hall.). So Dave, we're just trying to help.

1) Install a Slip and Slide- Come on. You know you want this. Imagine it. A Michigan Sideline Slip n' Slide for use after every touchdown. If William Campbell recovers a fumble for a touchdown watching him tumble down that water slide will be worth its (and his) weight in comedy gold. As an added plus, with the next Denard Robinson touchdown it'll prove once and for all that he's actually fast enough to walk on water. That's easily worth the 15 yard penalty.

2) Live Wolverine Cage By Visitors Locker Room- If LSU can get away with having Mike, a live man eating Tiger on the friggin field, we should be able to Bring Back Biff!

3) Rename One of the Suites the "Up Yours John Pollack Memorial Suite for the Elites" - I'm sure you've done it already, at least privately. But if you haven't, please do. And make the sign displaying it in extra pretentious Script Lettering. If you don't want to go that far, the least you can do for the fans is put a picture of his face in the urinals.

5) Install Cloverfieldtron - We've already covered this. And God Bless you, you've listened. And yes, it must be this big. 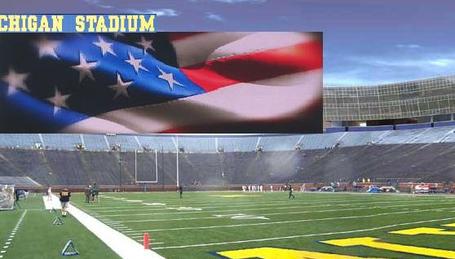 7) Put in a Few More Entry and Exit Gates- Just a humble suggestion. Don't get me wrong, I love being funneled into a narrow entry way we 110,000 other sweaty, smelly, drunk Michigan fans as mucha s the next guy, but mayhaps there's space around he concourse for another gate or two? Getting into the Stadium is a nightmare and can take up to a half hour depending on the Gate. Plus, it's presently reminiscent of cattle being herded in a stock yard. So, if you've got some free time, an acetylene torch, and a couple of hinges, I can be up there on Monday to help with this.

8) Install Trap Doors Under the Visiting Fans Section - After the Oregon visit this is a necessity.

9) Bring the Huron River Closer to the Stadium - Think of the Tailgating! If Chicago, in the 1800's, can change the flow of the Chicago River so that it flows the OPPOSITE way that nature intended, we should be able to re-direct the river so that there's some dock-side tailgating available to the Wolverine Navy. Sure it will disrupt communities, and cost a fortune, but it's a great idea in my head! Lookit what Tennessee does! (yes, I am obsessed with this).

10) On field Holding Pen for Other Team's Convicted Felons - Make it big, MSU's on the schedule this year.

So there you go Michigan, ten great ideas and improvements that need to be made. Make 'em happen. Anything I'm missing?