"You will have a new coaching staff there by next January. You have a plan for that?"

Share All sharing options for: "You will have a new coaching staff there by next January. You have a plan for that?" 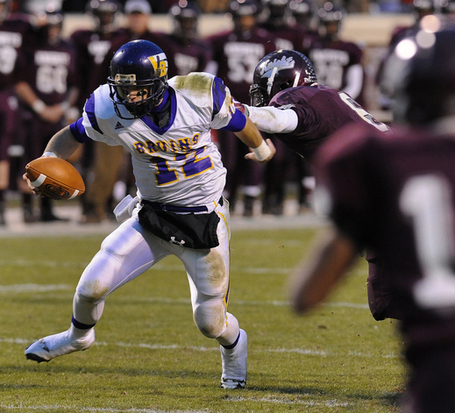 The world of college football recruiting is full of deceit and treachery.

Following his recruiting commitment to UConn head football coach Randy Edsall, Nebrich was courted via e-mail by BC's coaching staff to attend an upcoming BC football clinic.  Within the invite was a provocative assertion by the BC recruiter:

"We are hosting a one-day skill clinic on July 8. Would love to see you there. I know you're committed to UConn but You will have a new coaching staff there by next January. You have a plan for that?"

Gee, this might be the part where we all wonder who sent that e-mail? Hmmm. Say, is this gonna be a real brain buster?

On one level it  probably should be considered a valiant effort.  Nebrich is an up and coming star, and BC definitely needs a quality quarterback for the future.  On another level, the reported incident makes BC's football recruiters look pretty unethical.  I mean, now that the entire college football community knows about your staff's recruiting tactics it might be wise to restrict the pathological lying bit to verbal conversations with recruits only from now on.  BC coaches probably didn't get the memo, but young athletes these days - they are sort of what we like to call "connected". You know - e-mail, cell phone texting, facebook, that sort of thing. Only a matter of seconds until the ridiculous things you write down in an e-mail enters the public domain.

The truth is UConn's coaching staff is going nowhere next year.  Edsall's job is more than safe. He has expressed no pressing aspirations for new opportunities at the college or NFL level.

The thing is, most Michigan fans reading this example can only imagine the kind of negative recruiting being at fed wholesale prices to prospective recruits all across the country regarding the current and future state of Michigan football.

"So what will the coordinates of head coach Rich Rodriguez be come January 2011? You got a plan for that?"

The other truth is that negative recruiting tactics are highly effective.  Many prospective Michigan football recruits are holding off their commitments, taking more visits than they otherwise would, and waiting until later in the year, when Rich Rodriguez's fate may be more certain.  Negative recruiting pays off.  If it did not then it would be more seldom used.

I, for one, was pleased to read about Mr. Nebrich's observations. Behind the curtains of college football recruiting is a world of lies and douche-baggery indeed.  Sure, this crap goes on everywhere, but at least some young bright individuals are calling it publicly for what it is: asinine.