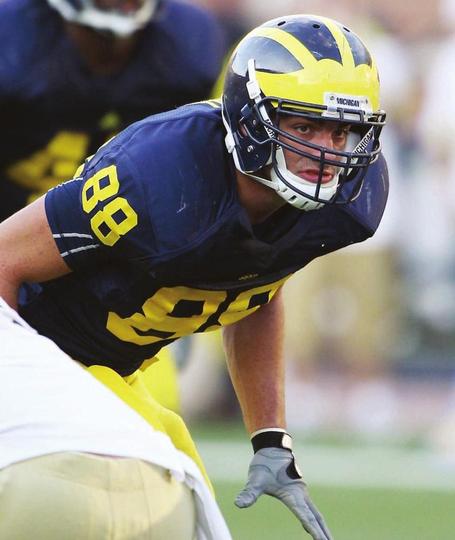 Michigan Outside Linebacker Craig Roh: Not Giving Out Manicures

Here's Part One of a week-by-week sneak preview of some of the opposing signal callers Michigan will be bumping into this coming football season.  Actually, I'm kind of hoping the Wolverine defense doesn't just bump into these guys, unless of course by "bumping into" we mean pile-driving into the turf with malice aforethought on as many consecutive downs as possible.

Heh-Heh,  I'm just kidding.  I meant that for third downs only.

On most Saturday afternoons this year Michigan's youthful defense will be facing a decent mixture of youth, experience and talent under the opposing center.

The good news is that Michigan returns 8 of 11 starters on defense for 2010 and is developing a healthier mix speed and agility to the defensive depth chart. The bad news is that despite having DE Brandon Graham, SLB Stevie Brown and CB Donovan Warren in the starting lineup, the Wolverines run defense was pretty much missing in action in 2009, finishing ranked 10th in Big Ten in rushing defense, surrendering 2,063 yards on the ground, just edging out Purdon't on the run defense futility scale by a lousy 18 yards.

So how was Michigan's performance against quarterbacks last year? In 2009 the Wolverine defense succeeded in finishing 8th in the league in scoring defense (27.5 points per game), 8th in the league in surrendered passing yardage (2,657 yards, 221 ypg) and 9th in the league in interceptions (11).  Also, Michigan registered just 22 sacks for minus 178 yards (with the reminder that NFL bound DE Brandon Graham started all12 games).

Michigan's defense went a step further by issuing opposing quarterbacks a proverbial "free pass" in the form of an average completion percentage of 60% from the field. Any defensive "success" derived against the pass in 2009 was largely overstated because Michigan's opponents pretty much had their way with the Wolverines on the ground. Nobody had to chuck it in order to move it.

In Part One we'll look at the quarterbacks of the first three opponents on the Michigan schedule. 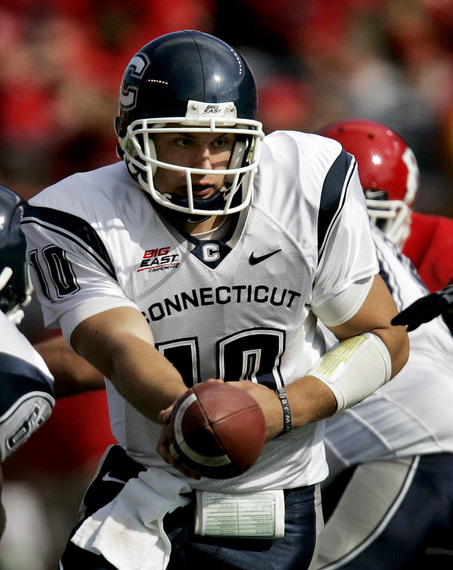 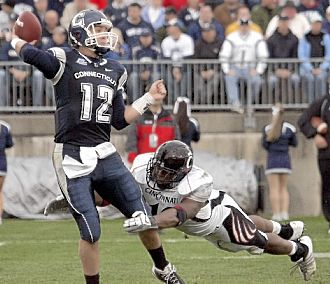 A few months back I mentioned several reasons why Connecticut might be one of the best opponents on Michigan's schedule this fall.  No really.  And I don't think I'm alone in this view anymore.  The Huskies' experience and depth at quarterback is considerable. Coach Randy Edsall is blessed with not only one, but two seasoned, upperclassmen signal callers to direct his offense in both Zach Frazer (116 of 218 - 53%, 1461 yards 10 TDs, 9 INTs)and Cody Endres (98 of 154 - 64%, 1,354, 6 TDs, 4 INTs).  Endres is the more accurate thrower of the two, but apparently far less mobile as he suffered twice as many sacks (14) as Frazer did (7).    UConn's passing yardage statistics would normally induce uncontrollable fits of yawning for most Michigan fans, except for the fact that Frazer and Endres split time at a position meant for one, and because coach Edsall was simply having way too much fun running the ball off tackle with guys like Andre Dixon and Jordan Todman, watching his backs cross the goal line a staggering 30 times on the ground. With the huge loss of star wide receiver Marcus Easley to graduation and the NFL, the Huskies may feature an even more run-centric attack than usual in 2010 with Todman (1,188 yards in 2009, 5.1 ypc) and possibly USC transfer at running back D.J. Shoemate the featured duo. This addition of even more talented ground weaponry behind an already stout offensive line will probably simplify the lives of both quarterbacks considerably so that Easley's replacements at wide receiver, Kashif Moore and Isiah Moore, among others, find their groove against the Wolverines' beleaguered secondary unit. Last year UConn lost 4 games by 4 points or less. Many of those losses were shootouts until the final gun and could have easily gone the other way.

Your Nails Should Grow Back Because:
In 2009 against 6 "tough" opponents (UNC, at Pitt, at WVU, Rutgers, at Cincy, at Notre Dame, South Florida), UConn's QBs were 2-5.   I don't want to minimize UConn's win at Notre Dame last year, especially for a program that's still incredibly young (2000 at Division I-A level), but it's curious to me how despite the obvious advancements of UConn football under Skip Holtz, and now Randy Edsall, and with the recent invitations to UConn for bowl games (the last one a public walloping of Spurrier's (SEC!) Gamecocks) the Huskies still haven't notched a significant upset yet.  Before we start the horror music score just before kickoff against Michigan, somebody needs to take a look at UConn's atrocious track record on the road (17-33 since 2000). They are 5-22 wearing the whites against just about any Big East competition. 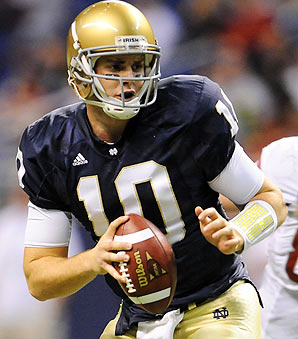 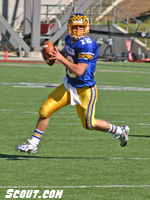 Brian Kelly has no business stepping within 100 yards of an injured quarterback because he just ends up creating great players and havoc for opponents. Someone should just call the police.  It's ridiculous. When it comes to quarterbacks, Brian Kelly is freaking King Midas. I mean, how do you explain obscure players like Curt Anes, Dan Lefevour, Ben Mauk, Dustin Grutza, Tony Pike and Zach Collaros magically showing up on Saturdays as unbelievably productive sharpshooters and elusive runners?  I don't know whether I can properly convey Kelly's capabilities in the quarterback coaching department clearly enough.  He's just plain good at it. During his first year at Cincinnati, he struggled to reset everything Dan Enos and Mark Dantonio thought was a brilliant idea offensively, and ultimately decided to plop in a senior transfer from Wake Forest at the position named Ben Mauk.  The result? Mauk turned in a ludicrous performance: 61% from the field, 3121 yards passing, 31 TD passes, just 9 INTs, 376 yards rushing and 3 TDs - all of it seemingly out of the ether.  OK, great. So why don't we shift and question Kelly's adeptness with freshman quarterbacks, yes? Well, when we try to do this we inevitably arrive at the exhibit of Dan Lefevour (RS freshman actually) of Central Michigan.  In 2006 Lefevour put up Maukian numbers as well: 3031 yards passing, 26 TDs, 10 INTs but a shocking 521 yards rushing and 7 TDs.

With all that in mind and looking square at Notre Dame's "problem" list of quarterbacks for 2010, what's not to like here, man? Kelly brings to South Bend the same damn Kelly-green, spiral notebook jam-packed with bread and butter, no huddle, spread offense plays from Jeff Quinn - the same plays that shredded opponents into pretty little ribbons while coaching at Grand Valley State, Central Michigan and Cincinnati respectively. They're still talking about the damage every place Kelly has hung his hat - all without the luxury of any 4-star prospects at the important skilled positions.  This year Notre Dame probably replaces Jimmy Clausen with a 5-star quarterback named Dayne Crist, a junior. There's also junior Nate Montana and two promising true freshmen Andrew Hendrix and Tommy Rees. Each quarterback brings something interesting to the table for Michigan to ponder defensively.  Unlike Tony Pike and Zach Collaros at Cincy, Dayne Crist was the No. 3 quarterback recruit in the nation in 2007.  While Crist is recovering from a torn ACL from last season, he should be ready to go come August.  Nick Montana got into trouble recently, and his status is now questionable now as far as earning time in the Irish QB rotation.  Should Crist falter for some reason, this might bring Notre Dame precariously close to playing the true freshmen Hendrix and/or Rees. Even when his quarterback depth chart recedes with injuries as it did for Kelly in 2007, 2008 and 2009, the backup quarterbacks end up being equally dangerous as evidenced by the performances of Dustin Grutza, Chazz Anderson and Zach Collaros last year.   Do I even need to mention Notre Dame's receivers?  OK. Well, they're really good.  Two of their three leading receivers return in junior WR Michael Floyd, speedy freshman Tai-Ler Jones, and junior TE Kyle Rudolph. There's also WR Shaquelle Evans and tailback Armando Allen to worry about.  This offense is not always conducive to a 1,000 yard receiver, but Notre Dame has the same ingredients at QB and wide receiver in 2010 that Cincy had in 2008 when Mardye Gilyard and Dominic Goodman had 1,000 yards a piece through the air.

Your Nails Should Grow Back Because:

They just grow back, alright!? I don't know man. Combining Kelly's magic touch at quarterback with Michigan's chronic weaknesses on defense is already giving yours truly delirium tremens. This is made only worse by the fact that Kelly and Rodriguez both have some kind of sick affection for having their quarterbacks perform all the offensive butchery. The last time Brian Kelly met Rich Rodriguez was 2007 in West Virginia match up at Cincinatti. In that game, West Virginia led 21-10 at halftime and appeared ready to pour it on in the second half, but Cincy quarterback Ben Mauk almost brought the Bearcats back to win it, but came up short in the end 23-28.   Mauk's stats? 323 yards passing, 2 TDs, 0 INTs and he led the Bearcats in rushing with 52 yards on 15 carries. 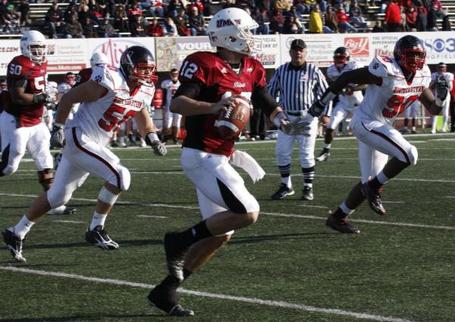 You worry too much. The lines at the Michigan Stadium concession stands and bathrooms are not going to be that long anymore. Besides, you should stop biting your nails. It's a nasty habit. I'm not clairvoyant or anything, but my educated guess for this game is that Michigan is going to come back from the South Bend experience with a truckload of bad press and breathing napalm. UMass struggled to a 5-6 record in 2009 behind a young offensive line, a new quarterback, and inconsistent play on defense.  Kyle Havens was a 3-star JUCO transferr (HT UMass Football Blog) for UMass from Diablo Valley Community College near Concord, California (northeast of Berkeley). He became the starting quarterback last year playing in 10 games. In his first tour of duty for the Minutemen, Havens connected on only 55% of this throws for 1,908 yards and achieved 9 TDs alongside 15 INTs.  Havens will be a senior this fall, will be a lot more comfortable with the playbook, and should demonstrate significantly improved numbers.

Your Nails Should Grow Back Because:

Diablo means the "devil" in Spanish.   And football is the devil momma.  According to the UMass Football Blog, when Havens was at Diablo Community College, his team finished ranked 2nd in the state (junior colleges) with 425 yards passing per game and 36 points.  Havens is a talented player.  One key observation for 2010 is that the Minuteman lose their best offensive linemen, Vladimir Ducasse to the NY Jets, and Sean Calicchio to graduation. Both were tackles. Havens is a pro-style quarterback, so the last thing he needs in his last year are new faces covering his blind spots. Havens was sacked only 13 times last fall and lost 107 yards. His longest run from scrimmage was 9 yards. This is probably a quarterback Michigan's defensive line and linebackers will be able to wrap their arms around.