On Tap: Your Friday Drinking Instructions Are Playing It Safe

Share All sharing options for: On Tap: Your Friday Drinking Instructions Are Playing It Safe

Next week marks the "kick off" of Big Ten season with the annual Big Ten Media Days being held in Chicago.  Things which we are fairly certain could happen include:

Aside from the 3rd possibility, the last choice seems the most certain to occur.  This is in line with what has been written/said by most pundits thus far, most recently by two of these three fools.  While it pains us to do so, and on a Michigan blog no less, we must concur with this sentiment.  Despite Arm-punt Pryor's grand total of one great game while leading the Buckeye offense, the weapons around him combined with a defense that makes electrodes on the testicles seem like a nice alternative would figure to do enough to send the Scarlet and Gray to yet another MNC.  With this in mind, a very special choice is in store for YFDI...

There is no shortage of great beer in Big Ten country, this column should be proof enough of that point.  However, few (if any) can provide the overall excellence of Cleveland, OH's Great Lakes Brewing Company.  Their entire portfolio features nary a weak link.  Due to production costs, few craft brewers can afford to put out lagers; GLBC puts out two, and world-class ones at that.  The "blah" Irish Ale style is taken to new heights by this brewery on the Cuyahoga, while their Christmas Ale is one of those rare seasonal beers that generate massive amounts of anticipation every single year.  Despite the impressive consistency of GLBC's offerings, the jewel in Great Lakes' crown may just be the Edmund Fitzgerald Porter. 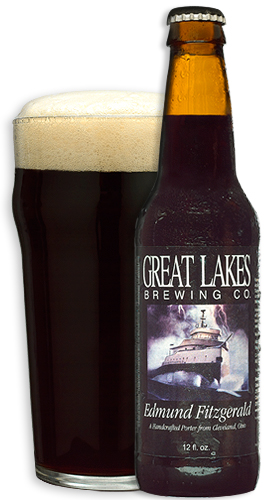 Much like Ohio State, this beer is on the dark side.  Actually, much like Ohio State, to say it's "on the dark side" would be an understatement.  This is the liquid embodiment of evil.  Yes, there are more viscous beers out there and there are those that pack more of a wallop.  Hell, there are those out there that provide more satisfaction with a single serving.  Yet there isn't a single American beer on the darker end of the spectrum that, for our money, hits its mark so consistently.  While other breweries deal with the occasional hiccups in quality control (Michigan's much-loved Arcadia, New Holland and, most recently, mighty Bell's are just a few examples), the Edmund Fitzgerald simply reloads with every batch (obvious enough Buckeye reference?).  This is one of those "Desert Island" beers; robust and chocolaty with hefty doses of chicory and coffeeeeeeeeeeEEEEEEEEEE!  God, I want one now!  A drinking life without it seems unthinkable.

Yet there is another reason the Edmund Fitzgerald serves as the perfect Buckeye beer.  The Edmund Fitzgerald was itself a hulking behemoth of a lake-going vessel (one of the largest of its class, in fact).  Its sheer size seemed to thumb its nose at the notoriously treacherous waters of the Upper Great Lakes.  When the great ship faced Lake Superior's full wrath (in Michigan waters no less) it ended up like so many before it; at the bottom of the lake serving as a cautionary tale to all for those who think themselves invincible.  So raise a glass to the sinking of The Ohio State University Edmund Fitzgerald.  Unlike the real Edmund Fitzgerald, though, few outside of Ohio will shed a tear if the Buckeyes' season ends up under water.  Who knows: if the Wolverines can cause the sinking of tOSU's season maybe Gordon Lightfoot will write a song about Rich Rodriguez.

Go forth and drink!