Where I Come From: How I Became a Michigan Wolverines Fan

Share All sharing options for: Where I Come From: How I Became a Michigan Wolverines Fan 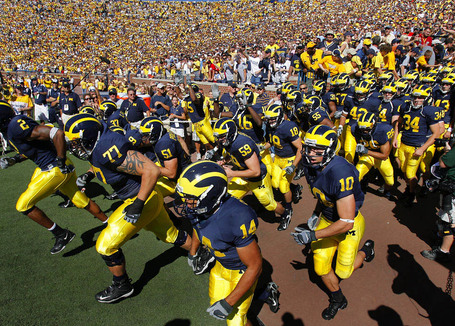 This post is sponsored by EA Sports NCAA Football 2011.

It must have been something about the winged helmets.

Growing up I had no connection to the University of Michigan whatsoever. My father was a Harvard grad and my mother went to a tiny bible college in Kansas. Even my grandparents had no affiliation with Michigan. The closest I got to Ann Arbor on any familial path was through my grandfather, and he did his undergraduate and doctoral work at Minnesota (Da U, as he would call it). So, as you can see, it's been a strange and wonderful path that's led me to this moment.

Moving from Chicago to Dallas as a petulant tween, my interest laid in the diamond rather than the gridiron. I considered myself to be a pretty good baseball player, and at that age no one felt it worth their while to quash my dreams just yet. So I played baseball incessantly, pausing for a brief moment in time to try out for the junior high football team while trying to adjust to my new football mad surroundings. As you can guess, it didn't go so well. Being, in some cases, three full years younger than the other competitors put me at somewhat of a disadvantage and my time in pads and cleats quickly came to an end as I pursued other endeavors. But that time did instill in me a respect for anyone who was crazy enough to smash heads like that six days a week as a hobby.

I'd been a Chicago Bears fan since I could crawl, but with no family ties to college football I rarely watched the college game. That is until high school and everyone started talking about where they were going to college and my Friday nights were become dominated by flood lights, aluminum stands, and crappy astroturf. All of a sudden I was watching college football. Regularly.

Many friends in high school were Notre Dame fans. I couldn't tell you why a bunch of teenagers in the late 80's early 90's liked Notre Dame so much, especially in Texas, but they did. As an Irishman myself, it would've been the logical thing for me to pull for Notre Dame, but I never did. For some reason the team they played every early September captured my imagination and has held it to this very day. When I watched Michigan play, watched those beautiful winged, maize n blue helmets march up and down the field, I was hooked.

But "Hooked" is a loaded term in Dallas, where you're either Hook 'Em or Gig 'Em. Maybe something bang bang for Tech, but who can recall at this point? Kids from Dallas didn't go to Michigan. It was too far. Too expensive. Too not Texas.Thankfully, that didn't faze me. I wasn't a Dallas kid, nor did I want to remain in Texas. Based solely on what I'd seen on television, Michigan had entered my consciousness and that was a school I wanted to apply to.

The more I learned about Ann Arbor and the programs Michigan had to offer, the more I wanted to go there. But it was a trip to Ann Arbor in February that finally sealed the deal. As I walked around Ann Arbor, talked with people, and breathed in the cold winter air, I knew that Michigan was the place for me.

Strangely though, when I got there football wasn't that important to me. I spent most of my time at Yost, playing or officiating hockey games, going to Michigan hockey games, and generally enjoying myself. Sure I went to all the football games, but it wasn't until after I left college that Michigan football truly took control of me.

There was something different about being an alumni. The pride you take in your school. The way others view your alma mater, and how the football team's performance affects that. You also start to realize that the kids playing every Saturday are just like you used to be. Young. Impetuous. Totally clueless as to how life works. And in some strange way as an alumni and fan, you start to adopt them in your own way. You see your best qualities in their successes and your own insecurities in their failures. You strangely care more after college than during it because the team represents a part of you that you want to cherish and preserve.

It also brings you close to old friends all while introducing you to friends you never knew you had. Michigan football is a connection to a part of my life I loved and is now a means to connect with others who share that same sentiment. Let's face it, fandom manifests itself in so many different ways that it boggles the mind. You have grown men dressing up in capes and face paint. Kids that can sing "The Victors" before they can sing their ABCs. Bloggers.

For me, my Michigan fandom wasn't a single moment or sensation. It was nearly 20 years in the making. Watching football on a Saturday. The puck drops at Yost. Friends kept and friends made. A connection to a University and an ideal that I cherish. I became a Michigan fanatic because of all these things.

Strange to think it all started with a winged helmet. How'd it start for you?