Where I Come From: Michigan and Maize n Brew's Tailgating Traditions

Share All sharing options for: Where I Come From: Michigan and Maize n Brew's Tailgating Traditions

This is the third post in a week-long series sponsored by EA Sports NCAA Football 2011.

It's strange that a nine letter word can instill so much passion, excitement and anticipation in a fan. But it does. Tailgating drives normally sane men and women to purchase mobile homes for no other reason than to use them as mobile kitchens and bathrooms with which to pre and post game party at a college football game. It drives us to find new and creative ways to deep fry a turkey, slam a Natural Lite (ICE), and pass the time by throwing things onto other things. It turns the Tennessee River into a floating dock of alcoholism, fried food, fat people, and insanely hot southern belles in sun dresses. It also makes the normally reserved Purdue Alumni base do this.

At Michigan, tailgating is an art. Art in the "is that an elephant feces version of Mona Lisa" sense. We party. It ain't always pretty. But we party. And we're pretty damn proud of it. There are literally thousands of places to tailgate in Ann Arbor, but if you're doing it right you're probably on one of Ann Arbor's golf courses, and within walking distance of the Big House.

For me, nothing beats tailgating on the University of Michigan Golf Course. Depending on the game time, the second those gates open off of State Street I try to be one of the first people on the course. If I'm lucky, I get a spot under a tree to shade my pasty Irish ass from the September sun and I start my set up.Now remember, a good tailgate, especially a Michigan Tailgate, is nothing without preparation and adherence to tradition.

First, you need to determine your ride. If possible, you should arrive in this: 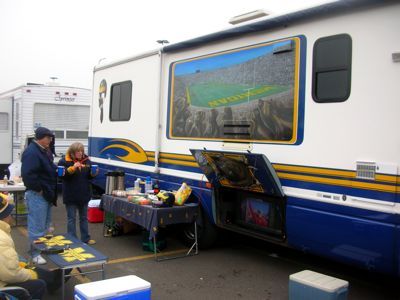 Now not everyone can possess an "ultimate" Michigan Tailgating rig such as this, but that shouldn't stop you from trying. Believe me, after tailgating for six hours the presence of your own, personal bathroom is worth it's weight in whatever illicit substance or monetary unit you prefer. After that third bratwurst and a slice of Aunt May's mayonnaise and bacon pie that you just ate to be polite but secretly liked, the presence of a toilet seat that hasn't been peed on (recently, depending on proximity to game time) becomes more important on an instinctual basis than procreating. In addition, a rig such as this allows you to decorate and modify it to your hearts content. Want to paint a Michigan version of Rembrandt's "The Night Watchman on the side? Go for it. Decide that your tailgate isn't complete without deep fried snickers bars? Add on a double-barrelled blast of two friers in the luggage compartment that slide out to reveal one frying up Oreos and the other preparing a turducken. Yeah... you feel me.

However, most of us with humbler means usually get by with our truck or car, so long as said means of conveyance possesses a large enough trunk or flat bed to haul: 1) a large cooler filled with beer; 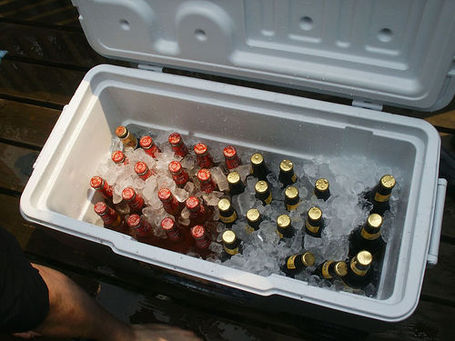 2) a grill (if possible, a trailer hitch and THIS are acceptable); 3) a table sizable enough for King Arthur to hold a get together; 4) a canopy to shield other pasty folks (or people who may have imbibed a tad too much) out of the sun; 5) a proper NCAA regulation sized football; 6) another cooler of booze and beer; 7) meats and cheeses; 8) chips, snacks, and mixers; 9) cups, plates and plastic-ware; 10) a set of flags with which to mark your position along with a collapseable flag pole; 11) CHAIRS; and 12) a beanbag/horseshoe/washers/somethingorother game to play. If you follow these simple instructions, you are on your way to an outstanding Michigan tailgate.

As you might suspect, I'm a little superstitious. I bring a certain type of beer to each tailgate, and I bring it in large enough quantities to fill a mid sized ocean liner. There are very few beers that will see the inside of my cooler. My primary beverage of choice: Leinenkugel Oktoberfest. Not only is it an outstanding American version of my beloved Bavarian Marzen style bier, it's available in large quantities from September to October. As a repeat visitor to Munchen's Oktoberfest (an alcoholic's version of Disney World), I acquired a taste for Marzen. Also, due to the overlapping timeframe of Oktoberfest and College Football season, I've watched a few games in Germany whilst downing a couple of liters of Dunkleweiss and chowing down on sauerbraten. Aside from being at the game itself, there's no better way to watch a football game (or watching it from a pool in Cabo San Lucas, but that's a New Year's Tailgating tradition). Hence, German style beer finds it's way to my cooler every year.

This year I intend to start a NEW Michigan tradition. Over the last three years I've noticed that Michigan does not do well when German or German-Style beer is not in my cooler. Frankly, the non-kraut beer record is abysmal. So in order to ensure success for Michigan this season I am instituting an all German and German Style, all the time rul for my cooler. As with all rules, there are exceptions. Miller Lite and Labbatt's products are allowed, simply because I love them and because not everyone can put down as much Paulaner Oktoberfest Marzen as I've trained my body to tolerate (which, incidentally, is one of the three best beers on the planet). So if you're tailgating, make it a German or German-Style beer. If not, that piss water bud light you drink will curve your spine, put hair on your palms and keep Michigan from winning the game. And it'll be all your fault.

Once you have set up your table and it's accompanying good stuff, one of the most important Michigan traditions is to be a good host. If you see opposing fans walking around, don't "boo" or be an jerk, invite them for a sandwich or an age-appropriate beverage. Tailgate with class, that's the Michigan difference.

Next, as game time approaches there are many things you're going to want to do. A recent innovation in the ever expanding list of Michigan traditions is the "Victors' Walk". The Victors Walk was started by Rodriguez as a way to get the fans fired up before games and allowing the fans the opportunity to give high fives and cheer on the Maize n Blue before the entered the stadium. Everyone who's gone has said nothing but great things about it, and it's worth your time to see it at least once. The walk usually occurs about three hours before game time.

For the musically inclined, the Michigan Marching Band does it's final warmup and march to Michigan Stadium around 11:30-11:45am. If you love the pagentry of college football, this is something you must see.

Now, aside from some of the festivities surrounding the Band and the Team, there's still a lot to see in Ann Arbor. If you get there early enough, I'd recommend walking through the Diag and tothe Union just for old times sake. The Union is still one of the Grande Dames of the Big Ten's architecture and the Diag is as classic a collegiate setting as you will ever see in your life. For merchandising, our buddies at Underground Printing have the hook up as well as our friends at the MDen and Moe's Sports Shop.

But as we get closer to game time, if you want to see a mass of humanity united in a single endeavor you must, MUST walk down State Street to the point where it meets Hoover Street. The intersection of State and Hoover has turned into a traffic nightmare but a tailgating party dream over the last few years. The streets are litterally clogged with collegians partying, drinking, dancing, and listening to music that I listened to more than fifteen years ago. Yes, Humpty Dance/Bust a Move/Anything by Blondie were already old when I went to school; and yes, they're still being played. As you turn down Hoover toward the stadium, it's a sea of humanity. 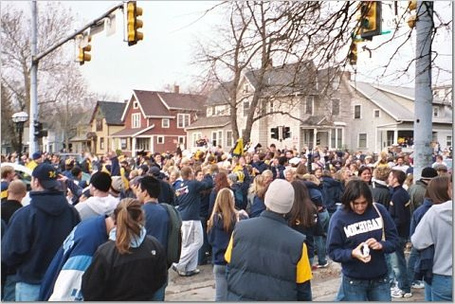 Then, you arrive at the stadium. Make sure you arrive about a half hour prior to game time so that you can see the team Touch the Banner and the Band make the pre-game Block M on the field. But these last things are post tailgate, and things you shoudl do anyway.

If you're talking traditions, the ongoing Celebration of Michigan Football is one that will never change.