Where I Come From: Maize n Brew's All Time Favorite Michigan Players

Share All sharing options for: Where I Come From: Maize n Brew's All Time Favorite Michigan Players

This is the fourth post in a week-long series sponsored by EA Sports NCAA Football 2011.

No discussion of fandom is complete without talking a little bit about the players that made us so fanatical about our beloved Wolverines. I've got two that stand out, but a handful that may surprise you. I'm curious to hear about your favorites as well.

Charles Woodson- As if this is even up for discussion. Woodson was and is greatest football talent I've ever seen in person. Many people with his type of talent are content to go through life simply living off whatever effort they're willing to put forth on a given day; Woodson is not one of those people. Having talked to him, watched interviews and read statements about him in the press for years, Woodson is a person who will never be satisfied with his on-field performance. And that is what makes him great. He never took a play off. And if you beat him, he was damn well going to make sure you didn't do it twice. Whether on offense, defense or special teams Woodson was always a difference maker. Now, as a professional, Woodson spends his time fundraising for Mott and other charities when he's not being sent to the Pro Bowl. He's just one of those guys. By far, my favorite Michigan defensive player of all time.

Desmond Howard- If Chucky is my favorite defensive player, Desmond is my favorite offensive player to suit up for Michigan. Every time the ball went anywhere near him you held your breath, knowing that something special might just happen. And when Desmond was on the big stage, whether against Ohio State or Notre Dame, he found a way to raise his game another notch. If anyone can pull off wearing a cape, it's Hello Heisman. If it's fourth and a foot, who are you going to go to?

Zoltan Mesko- The Space Emperor. It is very, very rare that you find a personality in sports that matches the hype you build up around it. Zoltan was one one of those rare exceptions. An All-American level punter and an All-American person, the smile on Zoltan's face never seemed to go away while he was at Michigan. Whether he was doing his weird little layup jump after returning to the sideline, falling down while touching the M Banner, or goofing around Newserbann, Zoltan always seemed to be enjoying himself. His performance on the field belied that state of mind as he boomed punt after punt into the stratosphere. We had a lot of fun with Zoltan over the years and he was incredibly gracious with us when we approached him. The top two slots in our Michigan hero cabinet might be taken by Des and Chucky, but we're more than willing to make some space for Zoltan.

Brandon Graham- The definition of the Michigan Man. He came to Michigan a heavily hyped LB/DE recruit. He bided his time and sat the bench his freshman year. His sophomore year he played a little and contributed on special teams. His Junior year he exploded onto the scene as an impact defensive end. His Senior year he was the best Defensive End in the country and almost single handedly guided Michigan back to respectability. And it wasn't easy for him. Losses piled up. People left. There was internal dissension on the team and inside Schembechler Hall. But through it all Brandon stayed true to his teammates, his school, and his coach. He has said nothing but positive thigns about his teammates and coaches, and will continue to do so whenever asked. Importantly, Brandon got his degree before leaving Michigan for the NFL. He's everything you want in a football player, a leader, and a student.

Braylon Edwards- Cocky isn't a big enough word to describe Edwards' personality when he arrived on campus full of piss, vinegar and talent. But as he grew up, he turned into arguably the best receiver Michigan has ever seen. And it's not just his performances on the field that make him a favorite. It's his charity work. His devotion to his community. Sure I may disagree with him about the current status of the program we both love, but I will never disagree with him about his onfield performances or how much he loves Michigan. I mean how can you stay angry at a guy who gave you this?

Chad Henne- You might scratch your head at this, but Chad Henne easily my favorite Michigan quarterback ever. Sure he never beat Ohio State. Yes he had his faults. But to me he was everything a Michigan quarterback should be. Cannon armed. Soft spoken. Intelligent. And possessed a good heart and a better sense of judgment. Chad did the near impossible his freshman year, stepping onto College Football's biggest stage and led his team to a Rose Bowl. Like Brandon Graham, you never had a whiff of trouble from Chad. He was just one of those kids that you were happy to have on your team. I never felt that Chad got enough credit for just how good a quarterback he really was, or just how tough an individual he is. Despite everything, he carried on at Michigan with grace and class. That's why he's my All-Time favorite Michigan quarterback.

Alan Branch - He may only have had one dominant year at Michigan, but he gave us this photo. 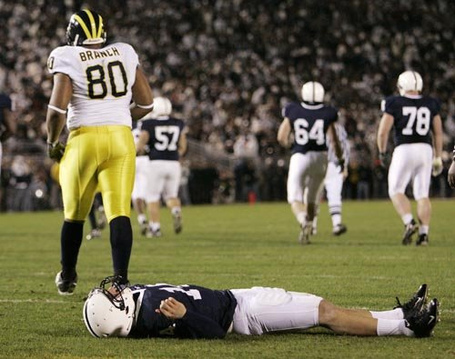 I will forever be indebted to him for it.

John Navarre - Maybe it's a theme with under-appreciated quarterbacks, but Navarre was another guy who seemed to get an undeserved share of crap despite being a great college quarterback. Another thing to remember is Navarre was the last Michigan quarterback to beat Ohio State, so I think that stands for something. Navarre was a good, accurate passer with a great deep ball. He had his flaws (brontosaurus like movements and a penchant for getting balls tipped at the line despite being 6'6") but I always thought highly of him and his performances as a Michigan quarterback. If you're looking for a specific memory, I'll give you two. The first was his Michigan record 389 yard passing performance against Iowa in 2003 and, of course, this:

Adrian Arrington- Adrian was something special. Despite all the adulation shining on Super Mario Manningham, Arrington was my favorite receiver at Michigan during the Henne/Hart/Long years. As you've probably learned, I like semi-tragic heroes. If you've got a pile o' talent and a minor flaw or two, you're probably going to be a favorite around here and Adrian fit that bill. On the field I thought he was the most complete receiver Michigan had seen since Braylon left for the NFL. He had a certain something. A shake. A move. Something that made me take notice. While Manningham was streaking up the sidelines, Arrington was cutting inside or taking the tough route. On the occasion he was cut loose on the deep ball he made teams pay. He was tough. He was dedicated. He was one of my favorites.