Some things are just worth waiting for.  Your first kiss.  Your first time behind the wheel.  Your first drink...oh, yeah, definitely.  But while all of the aforementioned experiences are wonderful, each of them (depending on one's level of cunning) can be hastened by the individual.  College football season is not like that at all.  The days between the last game of one season (Jan. 8) and the first of the following (Sep. 2)  are set in stone and cannot be moved forward or backward by anyone

OK, reanimated Christopher Reeve aside, there is not a soul who can make that first game (Wake Forrest vs. Presbyterian; only Demon Deacons could take on an entire sect of Protestantism) come any faster.  However, as painful as it has been for us, we wouldn't have it any other way.  Even in an off-season which saw a dominant coach in his prime retire, the same coach rethink his decision only days later, a slimeball resign his cushy post only to be replaced by a bigger, less-accomplished slimeball, Realignmentpocalypse! and Realignmentpocalypse!; The Quickening, several CFB Blue-Bloods get slapped with NCAA penalties...OK, you get it.  A whole lot happened this offseason and yet not even the number of links we provide will cause you, fine reader, to forget that every week that passes without the sweet, sweet nectar of college football is nothing short of agony.  Yet by the time that first glorious kick-off arrives all will be forgotten; it will have been worth the wait and the whole beautiful cycle shall begin anew.

In honor of good things coming to those who wait (as this is not a Pitt site, no links to Heinz ads shall be made at this time), YFDI wishes to point you in the direction of Brauerei Aying's (that's Ayinger Brewery, to the non-Deutchified) delicious Oktoberfest-Märzen: 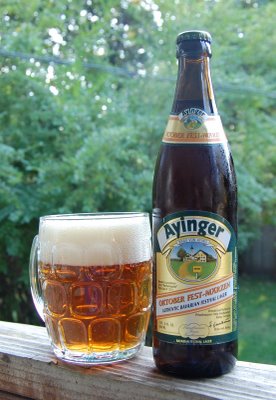 "Hold on" you may be saying "how does an Oktoberfest beer have anything to do with college football?"  First off, you may want to stop talking to your computer as your co-workers/family may start to become worried by your behavior or worse, have their suspicions confirmed and simply call the authorities.  Secondly, the confusingly named "Oktoberfest" style actually works for our weekly exercise in PSAT-level analogy.

Oktoberfest actually refers to the festival originally held in Munich on October 18, 1810 to celebrate the union of Crown Prince Ludwig and Princess Therese in marriage...as if we needed to tell you: 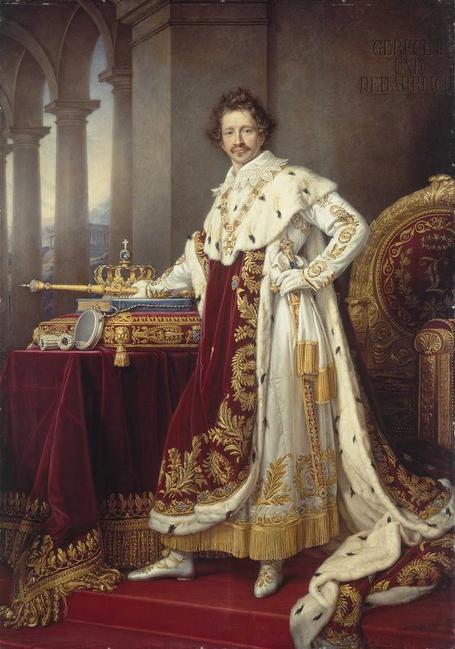 The exact date is debatable due to an entire week's worth of events in honor of the occasion.  Regardless, the festival was a big hit with the locals, so much so that the celebration became an annual event.  To ensure that the shindig would continue to be held in optimal conditions, the actual start of the annual festival was moved to begin in September culminating with a big finish on the first weekend of October.

So big, really fun thing beginning in September and ratcheting up in intensity by the time October rolls around with plenty of comely ladies of Northern European stock in tow?   Umm, Big Ten football?  Check...and how. 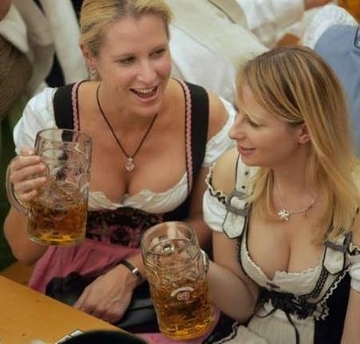 The beer itself is a curious creature in that world-wide it is known as "Oktoberfest" after the festival for which it's made.  However, in Germany it is actually known as "Märzen" from the German word "März" or "March".  "Oh, sure" you exclaim "of course Oktoberfest is actually named March!  Huh?!?"  OK, you've really got to stop the outbursts, but we'll humor you.  The beer served at the famed Bavarian festival are, like the vast majority of German beers, lagers.  "Lager" itself is actually the German word for cold storage (or roughly approximates that), a process that all beers under that banner must undergo in order to arrive at optimal serving conditions (3 months at a minimum).  This lagering process creates a clearer beer, cleaner flavors and crisper carbonation.  As Märzen is a stronger style of beer (5-6% ABV) than the average lager it requires a tad longer to achieve drinking readiness, hence, it is brewed nearly six months before it is to be consumed.  "So is it worth the wait?"  OK, the men in white coats should be arriving at your door any minute, but we shall continue to play along.  It is our humble opinion that, yes, the agonizingly long wait between the brewing and imbibing of this particular style is justified.  The particular brew we've chosen from Brauerei Aying is a rich, malty, caramel-colored brew with a surprisingly dry finish for something completely lacking in  discernible hop presence.  And despite the fact that the beer from Ayinger typically only comes in the large-ish 500ml size we are confident that you, soon-to-be-institutionalized reader, will have no trouble drinking several.

While this space is usually reserved for beers brewed in Big Ten country, those from Germany are given an exemption for obvious reasons.  So there you have it loyal readers (all four of you), go forth and drink!

A quick aside; the past week's rains in Central Iowa have punished an area of the country which has had to deal with such occurrences all too regularly over the last few years.  If you haven't seen the pictures from the campus of Iowa State a quick glance should tell you just how bad things have gotten in Ames.  While those of us over at Black Heart Gold Pants love nothing more than to see Iowa State suffer, it is strictly limited to ventures athletic.  There are real people dealing with adversity for the umpteenth million time in an absurdly short time-span.  Resist the temptation to aloofly chide people for living on a flood plain (as we see all too often on troll-laden comments sections of national newspapers) by remembering that they are there because the towns in that part of the country  help provide a huge portion of the food that ends up on each of our plates.  If you feel so inclined, please take a moment to head over to Clone Chronicles and send along your best wishes and prayers to our friends in Ames.  Thank you.

[BTW, if you're looking for more beers to try you can always check the Your Friday Drinking Instructions Archive to find your new favorite beverage!]