With Troy Woolfolk Likely Gone for the Season, Michigan Football Turns to Its Youth For Help at Corner

Share All sharing options for: With Troy Woolfolk Likely Gone for the Season, Michigan Football Turns to Its Youth For Help at Corner 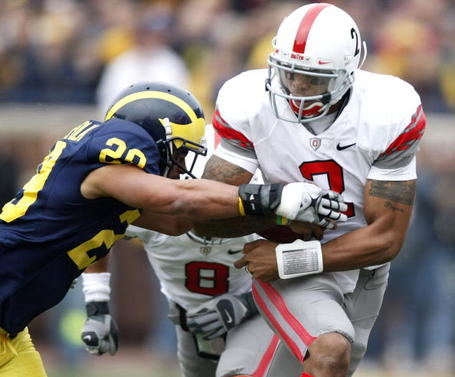 With Woolfolk out for the Season, Michigan's other corners will have to step up
Image via Gregory Shamus/Getty Images Sport

With Troy Woolkfolk most likely out for the season, Michigan is faced with a severe shortage of experience at one of the most critical positions on the football field: cornerback. In the time leading up to Woolfolk's injury most Michigan fans could be heard to say "Woolfolk will be alright, now if J.T. Floyd can be serviceable then things should go okay." With that in mind, Michigan fans went into a full blown meltdown when the news of Woolfolk's injury hit the interwebz.

Is the situation as bad as the Michigan faithful currently believe? No. Probably not. Still, this ain't good news and it means that Michigan is going into the season with TWO first time starters at cornerback instead of one, and it most likely means that a freshman will start the first game at corner for the first time in ages. This isn't like starting two walk-ons in rascals, folks. The kids that Michigan recruited at cornerback would likely start at most lower and mid tier BCS level schools. So don't look at them like they're not allowed to use scissors or play with glue. They're talented athletes who will represent Michigan well this season. Show a little faith.

We've already previewed the Michigan Defensive Backs this summer, but with Woolfolk's injury and the corresponding jumping from tall buildings by Wolverine fans, it seems like an appropriate time to go through the depth chart and calm some frayed nerves.

Starting No. 1 Corner: J.T. Floyd. Before everyone bemoans this, think about. J.T. was a a consensus three star recruit with some high level offers from BCS schools (Tennessee immediately comes to mind). He's not chopped liver and shouldn't immediately be considered a liability because he hasn't seen the field yet. The kid is only a sophomore, and has been repeatedly singled out by Rodriguez and his teammates as being the real deal. Given that Rodriguez is stripping the wings off players helmets that he considers lacking in effort and preparation, the fact that J.T. is routinely coming in for praise should actually ease some fears.

J.T. may not be an All Big Ten corner this year. Hell, he may not even warrant honorable mention Big Ten either. But he's a talented kid who seems to be rising to the occasion. I can think of another unknown secondary player who came out of nowhere to be thrust into the spotlight by injury. His name is Jordan Kovacs and he was a Freshman All-American last season. Star ratings and recruiting hype only go so far. If J.T. has the desire and drive to be the best, which I've heard repeatedly that he does, he'll makehimself a good corner. He may not be Charles Woodson, but as long as he's not Markus Curry I'll be happy.

Starting No. 2 Corner: Based on talent alone, Cullen Christian. Christian comes into fall camp the most highly regarded corner on Michigan's roster. Every recruiting service but ESPN rated him substantially higher at corner than Demar Dorsey and considered Christian a sure fire, can't miss Big Ten corner while he was still in high school. I mean, when Scout (#3 corner) and Rivals (#8 corner) drool on a player this way it's hard not to get excited. I love coming back to this with Scout.com evaluation quote:

"Bottom line is he is the total package at cornerback, and one the best in the 2010 class, and he will make a huge impact in the Big Ten."

They only concern with Christian is lack of track star speed, but before you start thinking the kid is draggin a house behind him, his combine numbers were pretty damn good and it's impossible to coach basic ball instincts on the field. The kid has them and you should be grateful for that. Sure he's going to be a freshman, but so was Donovan Warren and he ended up a Freshman All American. That's not out of the question for Cullen either.

Depth: Based on what I've seen on film and what I've heard around the internets, I would not be surprised to see Teric Jonesshift back to full time cornerback this fall. You might recall that Teric was a three starrunning back out of Cass Tech who was switched to corner/safety at the start of last season. One thing I'll say about Teric that matters is the kid is fast. I'm sure you remember the Spring game 97 yard bomb to Roy Roundtree. The kid that came from outside the frame to almost catch Roundtree was Jones. I would like to borrow from Scout's outstanding evaluation of Teric (as a RB):

Has outstanding speed and acceleration. Is a shifty elusive runner who can make people miss and run away from defenders in the open field. Has great hands and the versatility to be used in a variety of roles. Has good strength pound for pound and a solid build, but still needs to add some size... Also must show he is more than a home run hitter.

Yeah, so... awesome. Jones seems to be the definition of a DB. Faster than hell, strong, good hands, good hips, quick cut ability. Woolfolk's injury means he's going to see a lot more first and second team reps at corner and may have the opportunity to impress the coaching staff. This may sound wierd, but I'm actually excited he'll get more opportunities to play.

Next on the list you've got Courtney Avery, a true freshman who also just arrived on campus. Avery is one of those special kind of athletes who were he two inches taller would've been an elite level recruit. At 5'9" ish, Avery started playing corner his junior and senior years after spending most of his time exclusively at QB. Why QB? Because he had a Denard Robinsonlevel athleticism at the QB position (well, at least in terms of playing at a smaller Ohio high school league) which basically demanded that he have the ball in his hands. Realizing that there wasn't much of a market for 5'9"ish quarterbacks, Avery made the switch to corner and blew the pants off Scout's evaluators:

A good football player who posseses above average speed and good quickness and agility. Is smart and understands the game. Picks up quickly on routes and has the athletic tools to close on plays. He does not have prototypical size, but is able to play up on the line.

The knock on Avery, of course, is size. I think after both services ranked former Michigan Corner Boubacar Cissoko at four stars (almost five) they may be shying away from giving midget corners higher ratings (thanks a lot Michael Floyd). But Avery seems to be a kid who could immediately compete for a position. He's reputed not only to be in outstanding physical shape but one of Michigan's smartest recruits (the kid originally committed committed to Stanford and had Northwestern all over him). He'll pick up the defense very quickly and he certainly has the athletic ability to make an impact. Sure, he's short. But if he can play, I'll take a short guy that knows what he's doing over a tall clueless dude in a heartbeat.

In terms of added depth, Michigan isn't twisting in the wind. Also joining the ranks of the defense this season is Terrence Talbott, another young corner with decent (not awesome) offers and a nice upside. I don't see Talbott playing this year unless he makes some kind of super leap during fall practice because he's almost a year younger than everyone in the freshman class and is a little undersized. Talbott will grow over the course of the year, but my preference would be to red-shirt him. Unfortunately I don't think that's an option. Talbott may be forced into action, but that's only if the next guy on the depth chart doesn't pan out.

James Rogers was another 3 star/4 star recruit with decent hype who committed early to Michigan. Rogers hasn't had the easiest ride at Michigan and has ended up somewhat buried on the depth chart, but that's not because of lack of raw talent. To this point he's been a good special teamer but hasn't shown any ability to play consistently above "yikes" in the secondary. As a senior it's now or never for Rogers, so we'll have to see what he brings to the table. I'll be honest, I don't think he's going to make the jump at this point, but I'll keep my fingers crossed.

The Takeaway: Look. I'm not going to blow smoke up your butt and tell you that everything is going to be rainbows and unicorns. It's not. Woolfolk's injury is awful, awful news for an undermanned and personnel deficient secondary. Even so, there's enough talent in the pipes to keep Michigan out of a full blown holocaust. I'm taking a "things will be okay" approach to this.

What I think you'll see this season is a wagon load of zone coverage this season. So if you get frustrated looking at DB's laying off the corners, you're going to have an aneurysm this season. But it's going to be necessary. With the youth and inexperience at safety and corner, Michigan's defense will be playing a "contain" type defense all season. It is what it is. I choose to be optimistic.

Because the alternative sucks.