Tate is Probably Not Transferring

Share All sharing options for: Tate is Probably Not Transferring 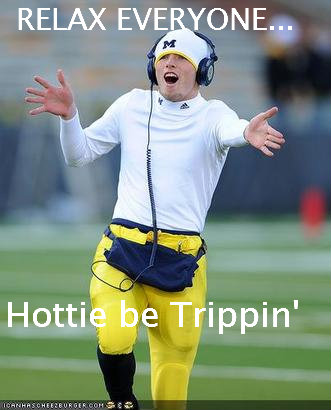 As with anything these days, nobody can say anything definitively, and given the "wheeeeeeeee!" nature of being a Michigan football fan over the past week or so I don't think anyone knows what the hell is going on, but yeah: Tate Forcier is probably not transferring.

If you're scratching your head as to why this is a rumor to start, you're in good company.  Basically, typical hot-blonde sideline reporter for the Big Ten Melanie Collins tweeted last night that she had a good source saying that Tate was going to transfer.  She did point out that it was not confirmed, but yeah, with the Michigan fanbase already primed to ignite themselves using homemade napalm, this did not go over well.

WTKA said this morning that there is nothing to the rumor, and Sam Webb is reporting that Tate is fine and in practice.  Here is the update from Melanie's twitter feed:

My mistake on letting you all in on something I was told today. I did not "report" or "confirm" this information. Simply shared what  a source within UM told me and I shouldn't have tweeted it without confirmation. Wasn't trying to start an uproar.

In case you're wondering why Michigan fans seem to be teetering on the edge of paranoia regarding Tate's future as a Wolverine, recall both his older brothers transferred for playing time at some point in their careers.  It's not as if a transfer would be out of the question given the track record.  However, let it be stated loud and clear - as of right now there is NO INDICATION that Tate Forcier plans on transferring.

You may resume panicking about the defensive backfield.