On Tap: Your Friday Drinking Instructions Need a Minute To Collect Themselves

Share All sharing options for: On Tap: Your Friday Drinking Instructions Need a Minute To Collect Themselves

We were running late.  We were supposed to have been home nearly an hour earlier but the job kept us late and traffic was inexplicably heavy for a Saturday.  We ran inside and flipped on our decrepit TV and went to grab a beer while the aging tube did its weird 30 second warm-up routine (it was a wedding gift...clearly bought on sale).  The sound was turned way down for some reason so the play-by-play was inaudible from the next room.  We sat down and looked at the score with our bleary-eyed, third-shift vision barely in focus...could that be right?  Penn State 33, Iowa 3 with 5 minutes still left in the 1st half?!?  Sadly, no, that was in fact not the score posted and as our vision adjusted the score became clear: 66-3...but the time was still correct.

There was nothing in our life of fandom that prepared us for this.  Certainly Iowa had been bad but not this bad and certainly not this year, our year.  This wasn't Indiana last year; JoePa's team was not about to give up 28 4th quarter points, let along 64 2nd half points.  Grandma called at halftime; she, in her usual victimized, incredulous homer passion blamed everyone from the refs (multiple times, in fact) to the coaches to the announcers (a favorite target for some reason).  The 2nd half began and, despite most of the Nittany Lions's starters beginning the half on the sidelines, the Hawkeyes were demoralized and defeated... 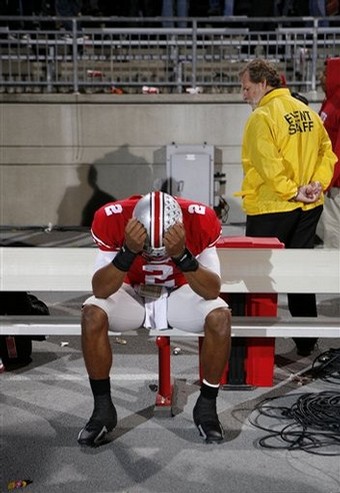 The very few fans left in Kinnick were split between those in catatonic states and those booing with the fury of one who has been betrayed in the cruelest of manners.  We had never seen anything like it nor did we care to ever again; for the first time in our sporting life we switched off the television before the outcome had been finalized.  Despite watching some truly horrid Iowa football and (especially) basketball teams, despite a lifetime of watching guys like Antonio Alfonseca and Dave Otto pitch for the Cubs, never had we left a game or turned off a television until the game was over.  Real fans don't do that...but today we weren't sure if it was worth it anymore.

The next morning was like a bad hangover.  We woke up sullen, de-energized and more than a bit, well, hung over.  And it was hot...way too hot for the first weekend in October... 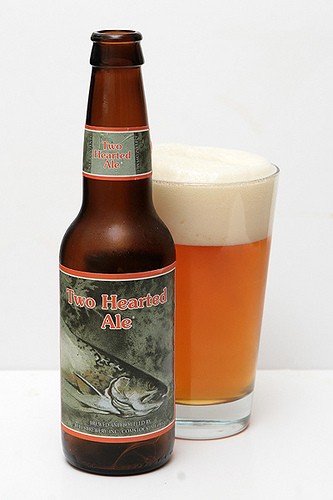 A quick public service announcement: never drink three bottles of Two Hearted Ale after finishing a liter of Ayinger Oktoberfest, half a bottle of Temperanillo and a glass of Ricard or your favorite team will dream-lose to Holy Cross.  That is all.

Most of us are fans in the literal, shortened form of "fanatic" (which is why you are spending your computer time visiting this site as opposed to on-line poker, pornography or FailBlog).  It is only the most fanatical of us who can allow an abomination of REM sleep to make us spend the better part of our day shaken, angry and looking for answers.  This is because it's not just something we're interested in, it's a part of our very fabric.  Our fandom has a direct link to our hearts and snapshots of games past cause us to react viscerally, sometimes even violently depending on the outcome.  Observe:

Two Hearted Ale is a great looking beer.  It dons a vivacious, snow-white head that sits atop a brilliant orange body like a crown.  It absolutely bursts with citrus aroma and the flavor is a near-flawless marriage of sweet, bready malt, juicy navel oranges and bracingly bitter hops.  And it drinks sooooo smooth.  It is no different than sports in that way; the first taste of success is delicious, seductive even.  Experience it enough and you'll move that semi-numb buzz to full blown drunkenness without much awareness of the world around you and feeling a bit invincible (THA clocks-in at an unusually high 7% for beer that isn't a limited release).  And then the hangover...  Losing is never fun but damn if it doesn't hurt more than after a winning streak.  And everyone will get a kick out of seeing your misery because, let's face it, you were probably kind of a douche while things were going well.  Now we wouldn't trade those wins just to avoid the inevitable pain, just as we were glad enough to drink those first three beers.  Careful about finishing that entire six-pack, though; if you go all-in you'd better be prepared to deal with all of the potential outcomes, not just the good ones.

Folks only two more weeks until it begins...deep breaths and sweet dreams.  Go forth and drink.