Why the calendar matters when it comes to THE GAME

Share All sharing options for: Why the calendar matters when it comes to THE GAME

I respectfully disagree with Dave's take on this one, there are some things that are indeed still sacred in this game that we all cherish so much, and Michigan vs Ohio State to end the regular season of college football for each team is one of them.  Not many of you need a lesson on the rivalry, but perhaps what is needed here is a refocusing on just why this rivalry is the be-all-end-all when it comes to clashes, not only in college football but in all of sport.  The gravity of this matchup was born not only from bad-blood and classic contests, from giants on the sideline and heroes earning accolades on the field, but even moreso for what the win or loss meant each team.  The finality of it all has played as large of a role in the ascension of the rivalry as any other factor I've seen mentioned since this whole mess of moving the game was brought up. 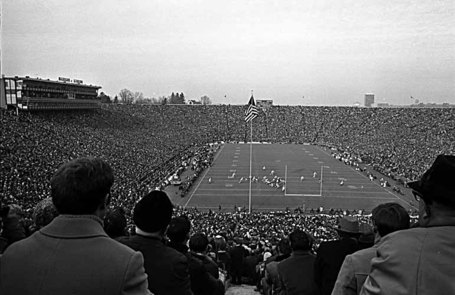 The Crowd in 1969 via bentley.umich.edu

The importance of Michigan vs Ohio State has been forged from more than just the bad-blood that exists between the two schools, or the characters and giants that have contributed to its lore from between the hashmarks or on the sidelines over the years, or even still from the classic contests that we still watch today decades after they were played.  No, you see part of what has made THE GAME worthy of all-caps, bold, and italics is that it has carried a weight and meaning that is quite frankly, hard to fathom.  You see in the 75 years since the Michigan Ohio State game was moved to the final week of the conference season (done in 1935) the game has literally been the Big 10 Championship game 22 times, or just under 30%.  Impressive in and of itself, but then you consider the impact that it has had on the Big 10 title...another 24 times the outcome has had a role in determining the Big 10 championship.  So, 46 times in 75 years, this ONE GAME at the end of the year has either determined outrightly or played a significant role in determining the conference title... that's 61.3%.  Big Two and little eight (nine) indeed.  Want the full rundown on each of these contests and how they affected the conference outcome?  Sure you do, look no further than the awesome Bentley Historical Library site.

Pretty ridiculous when you ponder those numbers for a bit.  Now then, let's ponder whether there would even be such a compilation of these kinds of numbers if these two teams met annually in October rather than wrapping up the season at the end of the year.  Ill-informed state that there's no difference, playing the game is playing the game.  They're wrong.  Playing the game knowing exactly what is at stake and what spoils go to the Victor and sorrows to the loser is entirely different.  Are Tai Streets and Shawn Springs inexorably linked if the slip and subsequent home run slant occurred in October rather than in November with an 11-0 team staring a Big 10 title and National Title in the face?  You tell me.

Timing matters, it matters a lot, and it especially matters in the meaning of this rivalry.  Take the Michigan Daily headline following the 1995 contest: "Biakabutuka's 313 yards ruin Ohio State's title hopes"... move it forward a month and it becomes "Biakabutuka's 313 yards ruin Ohio State's day"... blah.  You don't get Keith Jackson's all-time call of "Helloooo Heisman!!!".  What's more relevant to college football, Michigan and Ohio State playing a great game in early Fall, or Michigan and Ohio State playing a game that will decide whether one team plays for a title (conference or otherwise) or not.  What next guys, we start playing at a neutral site?  Blasphemy.

We have plenty of other grudge-matches and key games to play around with, see the ND night game coming next year, there needs to be some appreciation for the fact that what seperates Michigan/Ohio State from Michigan/MSU, Michigan/ND, etc is not just the intensity of the malevolence between the two camps, but what a win means.  It's not just bragging rights, it's a successful season with titles on the line vs being remembered as a coach who got teams to 11-0 and then couldn't get by Michigan.

Think of how Woodson clinched the Heisman.  Think of how Desmond clinched the Heisman.  Think of all of those defining moments, Streets and Springs, Touchdown Tim, hell if it helps think of Archie Griffin.  The combination of the opponent, the stage, and what was on the line in those games combined to elevate those players and performances above and beyond just "great" and go to "career defining" and that is why THE GAME deserves to remain in its rightful place at the end of the year.  While an actual championship game will take place afterwards, steps can be taken to ensure that Michigan and Ohio State continues to have the opportunity to influence the course of the conference title: keep the teams in the same division, and continue to play the game in the last weekend of the season.  The weight and importance is kept, and you have the added bonus of avoiding the chincy-ness of a possible rematch a week or two later.  It's not a difficult solution, and my view, it's the right thing to do.