Heroes: Brock Mealer and Mark Herzlich Remind Us What That Word Means

Share All sharing options for: Heroes: Brock Mealer and Mark Herzlich Remind Us What That Word Means

As college football fans, and sports fans in general, we tend to use words like "role model", "soldier", and "hero" without a lot of thought as to what those words really mean. We throw out these words that have a definitive purpose and meaning as though they are adjectives. Sometimes because they fit a sentence or an image we wish to convey. Sometime because we've gotten so used to talking in hyperbole that we can't help it. Unfortunately, in doing so, we lose a part of what those words actually mean.

It wasn't too long ago we all watched in stunned bemusement when Kellen Winslow thumped his chest in front of a crowd of reporters and announced to the world "I'm a soldier." This pronouncement followed a brutal hit on Tennessee Volunteer's cornerback Corey Campbell, not military service. It followed him standing over an injured player rather than helping him to his feet. In that moment he was anything but a soldier.

Sadly, the use of these words have become so ingrained in our consciousness through Sportscenter, NFL Live, broadcasters, etc., that people of all ages now use them in everyday conversation about athletes.

Say what you want about Charles Barkley, but the greatest service he gave the sports viewing public was his "I am not a role model" commercial. In it, Barkley (or at least a savvy Nike advertiser) attempted to remind us that "role model," "hero," "soldier," and whatever adjective Ron Jarowski is using to describe Brett Favre these days, actually used to mean something. Something special. They are words that should be attached to people who earn that right because the lives they consider ordinary are lived with a determination and humility that is anything but. More importantly, Barkley reminded us that those words aren't to be thrown around like candy on Halloween.

Thankfully there are people who wholy deserve words like "inspiration" and "role model" preceeding their names.

Three years ago Brock Mealer, his father, mother, brother Elliott (now a Michigan lineman), and Elliott's girlfriend were involved in a horrible car crash. The crash claimed the lives their father and Elliott's girlfriend Hollis, and injured his brother and mother. To add to the misery of that day, Brock emerged from the accident paralyzed from the waist down. Emerging from the accident, surgeons told Brock he would likely never walk again. Most human beings would simply accept that disability and move on. Not Brock. Despite the tragedy, the pain, and the loss, Brock Mealer will lead Michigan Football out of the Tunnel on September Fourth.

For nearly a year, Brock has forced himself to learn to walk again. Submitting himself to workouts that can only generously be described as agonizing, Brock (with the generous and uncompromising aid of Michigan Strength and Conditioning Coach Mike Barwis) has gone from being unable to even sit up in bed to being able to walk short distances without canes. All the while Brock has continued his education, working toward his masters degree in public policy at Ohio State, and aided in the education of others suffering from or wishing to learn about similar conditions. Speaking to high schools and community groups, Brock speaks about the power of believing in yourself, faith, and hard work. They will take you as far as you are willing to go. 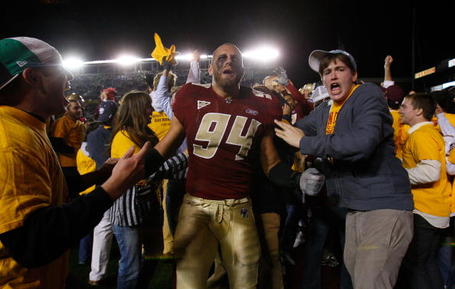 Similarly, it was a year ago the Boston College Linebacker Mark Herzlich received the worst news any human being can receive about their own body. He had cancer. The worst kind, a bone cancer named Ewing's sarcoma in his left leg. While it's true Mark was an All-American Linebacker, he was and is still a kid. And that realization hit me hard.

Perhaps its the violence of football that leads us to believe these young men are indestructible. They get up after the worst possible hits. They walk away from collisions that would kill lesser individuals. But, at the end of the day, they're human. They're just like us. The same goals. The same fears. The same vulnerabilities. The same needs.

Right now Mark Herzlich is not an All-American, a linebacker, or even a football player. He is a human being who just received some horrible news, and a human being who needs and deserves our support. Not just from Boston College supporters, but from all of us, regardless of allegiances.

Today, Herzlich has returned from a death sentence to resume his education and his football career. He is wary of his body, but also understands that you cannot spend your life worrying about things you cannot control. Mark committed himself to undergoing every painful procedure, every horrible second of chemotherapy, and now walks and runs with a titanium rod in his left leg where bone used to be. Today, he waits for a fracture in his foot to heal so that he can run back out on the field to be with his teammates. Not as a bystander, but as Boston College's starting middle linebacker.

Stories like these remind us what inspiration really means. Two young men whose dreams and aspirations were seemingly stripped away in a second have defied the odds to become role models for us all. They have taught us the importance of faith and perserverance. Both are simple kids, pursuing their education and living their lives. The difference between them and ordinary people is that they have overcome incredible odds not only to lead normal lives, but to lead exceptional ones.

They have perservered. They have overcome. They have given back. Some would call them heroes. And for once we'd get the use of that word right.