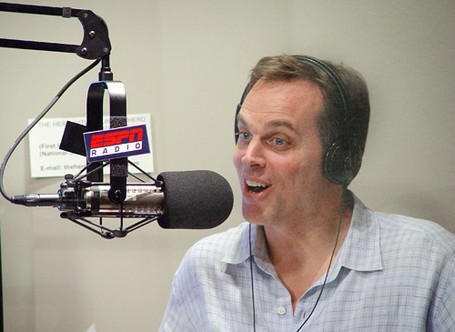 Colin Cowherd, ESPN Radio: Not a Big Ten Fan.  But then again....

I'm not a big fan of Colin Cowherd at all, but I found his comments on his a.m. radio show today interesting.

Here are some of them summarized that I had listened to:

1. Adding Nebraska is going to make the Big Ten a lot tougher. The Big Ten is tough now, but Nebraska places the Big 10 right up there with SEC in terms of brutal conference schedules.

2. Ohio State has "had it easy" the last several years in the Big Ten, and that's gonna change.  What happens when PSU gets a non-80 year old head coach, Michigan turns it around, and Nebraska joins the league?  10 and 11 win seasons will be harder for the Buckeyes to come by.

3. Nebraska has an outstanding football tradition and is a great program, but they may be in for a surprise once OSU, PSU, Michigan, Iowa and Wisconsin get added to the Huskers' schedule.

Cowherd also touched upon recruiting talent not being that great in Ohio (which I disagree with). I don't know if adding Nebraska will adversely tip recruiting scales that much in the conference.

Colin's main idea seemed to be with Michigan obviously down, PSU with questions swirling around the head coaching position, and with improvements at Iowa and MSU (like Michigan being down, are these long term?)  that Ohio State had "had it easy" the last several years.

Not sure I agree 100%. PSU hasn't exactly been down the last five years.  Plus Ohio State has done a good job of playing great defenses and good enough offense to hold of advances from Wisconsin, and some up and coming teams like Illinois, Iowa and MSU over this period.  I do agree that Michigan, obviously, has not been much of an obstacle for Ohio State in terms of winning the conference title and landing in BCS play during this period.