On Tap: Your Friday Drinking Instructions Respects Its Elders

Share All sharing options for: On Tap: Your Friday Drinking Instructions Respects Its Elders

The 2010 Cubs Convention: College Edition! Big Ten Media Days have come and gone and left us with very little in the way of new information.  There was no announcement on a venue for the Big Ten Championship Game (that came today), no word on how divisions would be lined-up and no further news on expansion.  That's not to say the event was completely without value.  It allowed some to have at some serious CFB Fanboy activity, let us see the Big Ten's greatest orator strut his stuff, and gave a more human face to some who are often times painted as cheap caricatures.  However, there was an element to these media days that was much more poignant than the annual staged event we're typically fed:

Sure, there's no denying that it was JoePa up there.  He had the same matter-of-fact responses (his description of his health issues cause TWWL's Adam Rittenberg to blush a bit) and and honesty to which we've grown accustomed.  But there was something lacking.  Yes, the lights are most definitely still on up there but we would be more than surprised to see the more gaunt, frail man who at times slightly slurrred his speech being able to match previous levels of intensity 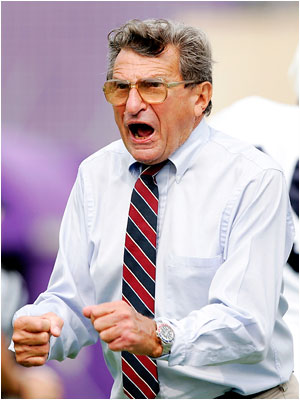 This off-season has been noticeably tougher on the "Italian kid from Brooklyn".  His vibrant cackle was noticeably softer, the razor sharp wit delivered just a touch slower.  One can't but help watch the preceding video think that this season will be his last on the sidelines.  However, there are just as many who wonder how much football does to keep Paterno sharp.  Would walking away from the game allow him to continue to act as a beloved figurehead for years a la Bo/Hayden/John Wooden, or would its absence in his life effectively kill him the way it seemingly brought about Bear Bryant's demise just weeks after retirement?   While there is no way to be sure of either outcome, YFDI is dedicating this week's selection to Joe Paterno. 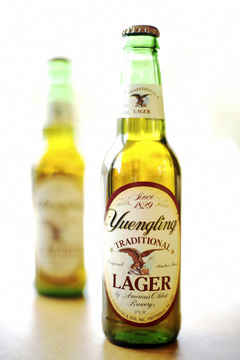 Just as Paterno and Penn State entered the Big Ten to much fanfare, the reputation of Yuengling carries with it a great deal of mystique.  We remember the first time we had to venture into the odd world of Pennsylvania beer depots to pick up a case and the amount of anticipation leading to the first sip.  Sure it was good, but the reality carried with it only a fraction of the impact of its surrounding mythology (remind anyone of Penn State's Big Ten history?).  Similarly, it is no longer the largest independent brewery (Boston Brewing Co i.e. Sam Adams) nor is it the most prestigious (Sierra Nevada, to name just one)...kind of like Beaver Stadium is to Michigan Stadium or the Penn State program is to tOSU.  While PSU itself remains a bit of an outlier to the rest of the Big Ten, Yuengling is actually unavailable within the Big Ten footprint save Pennsylvania (although all you U of M lawyers in NYC/DC are covered).  Finally, Yuengling is best consumed fresh i.e. in Pennsylvania, sort of like how the Nittany Lions are much better at home (thanks to Dave for that one).

Yet anyone who has had Yuengling, especially in their younger drinking days, can't help but look back with much fondness on this integral part of American brewing tradition.  It is a no-nonsense brew with a simple, malt-forward body and a clean finish that has a timelessness about it and lends itself to repeat consumption.  Man, if that's not a metaphor for Penn State football under Paterno we don't know what is.  To this day Yuengling remains a steal at (typically) $5.99 a six pack when compared to its brethren.  Anyone who has seen JoePa's salary over the years can attest to the fact that he's dramatically under-compensated (although at his behest), making him one of the sport's great values.  Finally, who really hates Yuengling or Joe Paterno?  It/he might not be everyone's favorite, but at the very least both garner respect and more likely a good deal of admiration and affection (Pittsburghers excepted, but yinz drink that crap Ahrn City, so you're exempt).  So we raise a glass (or if you're old and stubborn, a green bottle) to Joe Paterno and toast his health and legacy.  Go forth and drink...and come to Penn Schtaaaaate!