A New Way To Look At the Big Ten's Historical Numbers

Share All sharing options for: A New Way To Look At the Big Ten's Historical Numbers

Every now and then something unbelievably cool drops in your lap out of nowhere. This is one of those times.

Following the announcement that Nebraska would join the Big Ten, I did a little Q&A with our friends over at Husker Hype to welcome them to the conference and give them the lowdown on the Big Ten, our happiness that the Huskers were joining the conference, and our general thoughts on the future. One of the cool results of that Q&A was a college football fan with a great sense of humor and a knack for statistical analysis shooting me an email about a new system of analyzing a team's historical value kind of like a stock chart. What were the highest points? What were the lowest points? Everyone has a different take on that, but this gives us some numbers to discuss and new things to argue over! What's not to love!?

The method our buddy redroy (who resides in Michigan, and goes to one UM game every year) came up with was this: the Game Performance. It's a per game measure of any given team's history. Personally, I think the method captures the ups and downs pretty well, though there's always room to improve the model. The cool thing abotu this is that we can look at the statisitcal per game "value" of a program from 1998 through the present time. How doesn't Michigan stack up? Where does Iowa's rise fit in? What about Nebraksa? But to keep it simple, lets start with Michigan's per game value. Soooo.... Charts? 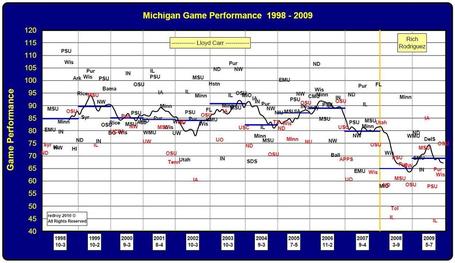 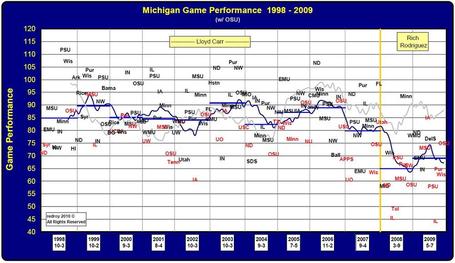 As you can see, the charts above are somewhat self explanatory. Even so, for the sake of clarity, black labels are wins, red are losses, the blue line that appears each year is the season average, and the squiggly line is a moving average trend line. The Y-axis scale is the index - note that 1 game performance point equals a football point. The index is largely based on quality of opponent and margin of victory. A diminishing return is applied to the margin of victory to temper blow out wins or losses. The formula is closely guarded by watch dogs, armed guards, and Lil' Red, but it's safe to say that some of the numbers fed into the formula come from the Sagarin Predictor numbers. You'll notice that the OSU trendline is present for an obvious comparison to our main rival.

Obviously, the Game Performance is historical/descriptive but not predictive of future performance (like stock charts - "Past performance does not guarantee future earnings" - or something like that). So, no Domers, your national championships in the 80's won't guarantee you wins in 2010. This paints a picture of what happened and how it can be quantified. By seeing different outliers, highs, lows, etc., you can dig in and investigate why it happened.

You might look at the chart and ask "Why is the 2009 Illinois game the lowest?" It's a loss to a 3-9 team by 25 points. Any Michigan fan worth his salt will say the App State game was worse, but notsofastmyfriend. I spoke with redroy about this and here's his answer:

According to the Sagarin predictor, the Appalachian State Mountaineers were the 58th best team in the country. This put them ahead of many other, even on Michigan's schedule (Eastern Michigan was 134th for example). The small margin of loss kept it from being worse than the Oregon game for example. It's worth noting that the next two teams in the Predictor ranking were New Mexico (59) and Nebraska (60). I don't think that App State would be #58 if they played a full division 1 schedule but that's where Sag's computer ranked them. They were the highest ranked 1aa and did win the 1aaNC. I imagine this will strike a note withyour readers just like it struck a note with you but if it was New Mexico or Nebraska that beat UM by 2 you probably wouldn't be asking the question. Thus this falls under my original statement of "not perfect" but does show the ups/downs of history pretty well.

So there you have it. App State wasn't our worst game. I can sleep now. /sobs/. Then, if you look further at the numbers, you'll see that the 1998 PSU game is Michigan's highest point in recent history. Why? A 27 point win over a 9-3 team.

There will be a few games that might not sit right with people's intuition (like the App St game). An easy example of a memory and the data conflicting, at least for a Husker fan, would be the 2007 NU-USC game. USC thrashed NU like a rag doll, but NU scores 21 garbage time points on USC's 2nd string to make it only a common loss per this measure. Late touchdowns/garbage points can change the relative game performance v. intuition - but these are exceptions. As a general rule, this seems to hold pretty well. 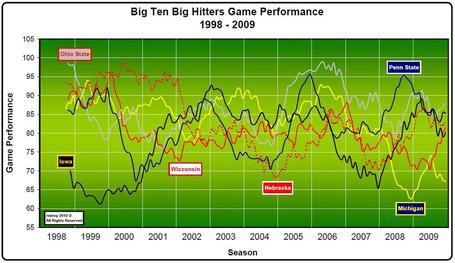 The second graph shows the Big Ten top teams with Nebraska for comparison. Like I said before, "with Iowa, Wisconsin, Penn State, and Ohio State all pretty loaded it's going to be a dog fight". The graph looks like spaghetti because it is very mixed with OSU a little above the fray the last 5 years. Can Nebraska waltz into the Big Ten and expect conference titles? Not based on recent history. But the improvement under Pelini does mean Nebraska will be a formidable opponent who look to be on a significant upswing.

Speaking of upswings, holy hell Iowa's graph looks like a friggin' roller coaster! Thankfully Iowa's fall in 1999 kept Michigan's demise in 2007 from being the worst number in the Big Ten among the "heavy hitters." The Hawkeyes game performance line will give you whiplash if you follow it too closely.

You might also ask about the starting point of the lines, "why does it start so far into the 1998 season?" Well, the trend lines are a 10 game moving average, and thus start at the 10th game in 1998. The original idea was to use 5 games because it seemed to flow with people's memories a little better, however the line tended to be really herkyjerky. At around 10 it smoothes out.

Looking at the trend line, Michigan is currently stuck in the 60's. However, given the talent Rodriguez is recruiting and the power of the brand, I fully expect them to return to their traditional standing high 80's and 90's. But the question remains, what is it going to take? Well we discuss that every day on this blog in one way or another, but in terms Game Performance how do they bump that average 20 points higher? It's kind of obvious, but stop the bad losses. No more losing to awful Illinois teams. Another thing, though significantly more difficult, is to average another 7 points on offense. Something that might be a little easier, hold opposing teams to about 10 points less (on average) than we have in the last 2 years. Imagine, a defense that didn't give up 35 points a game. Ah, simplicity.

Numbers are numbers and kind of speak for themselves. The difficulty is that numbers are just that, numbers. They're not predictive of how players are going to perform each week. But they do tell a tale of the overall health (in terms of wins and losses) of a program. I think the most gratifying part of this is going to be watching that line head back northward. As always, the numbers and the stats are subject to tweaking, so let us know your thoughts on the system.