Nervous? Don't Be! The All Optimism Preview

Share All sharing options for: Nervous? Don't Be! The All Optimism Preview

Tomorrow, folks, the boys start hitting for real, and the lights come up on the greatest carnival in American sports; a 4 month party of color, sound, beer, nachos, fizz, fuckery, and everything else that goes with the crash of pads and the sound go "GO" echoed across that beautiful, cavernous stadium to be answered by "BLUE" from the other side.  It's like that one night that you woke up outside a strange hotel room on a tropical island, not knowing how you got there, but somehow you've got a SCUBA dive scheduled for that next morning; except spread out over 4 months.

There are, as always, plenty of reasons to be pessimistic about the upcoming season.  These are all very real and very valid points, which have been addressed ad nauseum by nearly everyone who follows this team closely.  This will not be another one of those.  Instead, I've attempted to aggregate every single reason to be optimistic about this upcoming season.  So, in the only way I really know how, I'd like to offer a general "GO SCREW" to all those reasons to be pessimistic.  We all get it.  So piss off, negativity, and BRING ON THE HUSKIES.

Denard Robinson:  As camp has progressed, it's become obvious to everyone that, somehow, Denard Robinson has made so much progress as a Quarterback that he might unseat Tate Forcier as the "primary" guy.  Remember Tate Forcier before Molk went out, and before his shoulder was hanging on by tendons scrapped together from spare parts?

Yeah, Tate Forcier was pretty darn good, and if Denard has made enough strides to actually compete with what we saw the first half of the season from Forcier, then that's pretty impressive.  Combine a fully-functional thowing arm with Denard's vision and speed, and you've got a weapon that I'm not sure the Big Ten has ever seen.  The dude is faster than Pat White.*  When was the last time Michigan had a guy who could turn any play - even a broken play - into a TD every time he touched the ball?  When was the last time that guy touched the ball every single play?

The anchor of the offensive line, David Molk, is back, hopefully this time without his treasonous ACL that forced him to miss the majority of last season.  Last year, a clear delineation existed in offensive production when David Molk went out.  Prior to Molk's injury, this team was rolling up 40 points and beating Notre Dame.  Post injury, the team limped through tough losses to MSU and Iowa before the wheels came off entirely.  With Molk back, the offensive line has the ability to be one of the more underrated units in the conference, and with the speed we have in the backfield, hopefully they can get a block and spring them for long gains throughout the season.

This is the offense's 3rd year in the system, and the first time that Rodriguez has been able to have a "returning starter" at the quarterback position (whether Denard or Tate is used, they at least both played significantly last year).  That additional year of experience shows not just in how the playbook is understood and executed, it shows in getting meaningful practice time in.  Coaches have to spend less time getting everyone up to expectations, and getting players "on board" and have more time to actually, you know, coach.

A Bevy of Backs 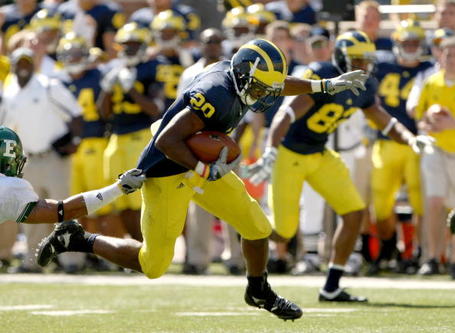 There has been some consternation as to how Michigan will fare without a "go-to back."  However, I see this as a strength.  With Michael Shaw (with bonus eligibility!) and Vincent Smith ready to go as starters, and Michael Cox and Stephen Hopkins ready to go for short-yardage MINOR RAGE kinds of runs, it keeps the defense just off balance enough for that extra yard or two.  Additionally, it keeps fresh legs in the backfield so that when that opposing DB is running out of steam, Vincent Smith can just blast by him because he's still fresh in the 4th quarter.

As has been alluded to by Rodriguez himself, a lot of times last year the offense knew what it was doing, but the players had to think about it:

When Denard played last year, he knew what the team was doing, not the why, or how it would be defended.

Darryl has come into his own as a leader on this team.  He's had the most productive camp he's ever had, and his kick returns gave us shades of Steve Breaston last season.  With a fringe 5-star WR finally coming into his own, this gives us an outside receiver threat that we haven't yet seen under Rodriguez. 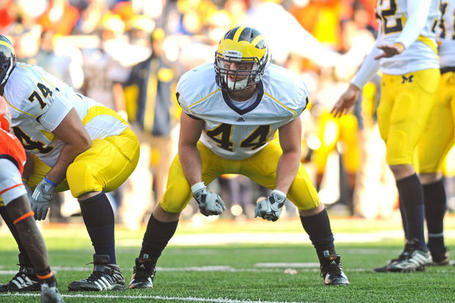 If you read mgoblog, you're probably aware that a main concern is that a guy switching sides of the ball, and then replacing the would-be starter at that position, is a sign of doom.  It couldn't possibly be because...he's actually good at linebacker, right?  From all accounts, Mark Moundros is one of the smartest, hardest working members of the team who fully committed to Linebacker in the fall, and was voted Team Captain by his teammates this Spring  He's got the body and the attitude for the position, and the smarts to at least be in the right place to make a play; even if he's not the type to be chasing down fleeing WR's (which hopefully won't be happening too often this year).  Ezeh was simply out of position the majority of last year; having a guy who can be in the correct position and is athletic enough to even slow down a play will be a MAJOR upgrade at this position, especially given the overall tactic on defense, which is to try to counter youth with speed.

As anyone will tell you, it becomes a lot easier to cover in the secondary if you're able to get pressure with the front 4.  It's even harder for the offensive line to adjust when that "4th" is either Craig Roh or Jonas Mouton shooting into the backfield to do very bad things to opposing players, as has been their strength.  This defensive line - by far the deepest and most experienced unit on the team - has the potential to be the kind of rock that the defense needs.  Mike Martin at Nose is my favorite move.  The guy just destroys things, and pressure up the middle is by far the most disruptive to any offense.  By putting Martin at now, it guarantees a double team - something Martin loves to split - and frees up our ends and rush-linebackers to make sure that quarterback doesn't have time to find an open receiver.  A scared quarterback is an ineffective quarterback, even if the secondary is the weak point of this defense. 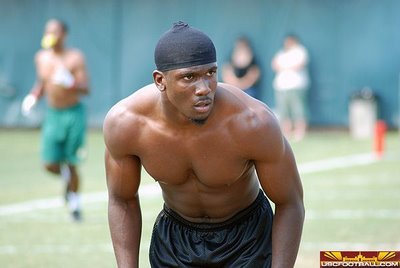 I know that James Rogers is your prohibitive opening day starter opposite J.T. Floyd, but honestly, I can't see him holding off Cullen Christian for too long.  This guy was a solid 4 star, fringe 5 star to nearly all recruiting sites, and plays a position that youth doesn't necessarily equate to doom.  Remember when Donovon Warren won all-freshman honors at Cornerback?  Christian has the skills to do the same.

For the first time in a long time, Michigan has some continuity at defensive coordinator, and hair product connoisseur.  Greg Robinson has won NCAA titles as Defensive Coordinator at Texas, Super Bowls as Defensive Coordinator with the Denver Broncos, and was the world's worst head coach.  Fortunately, he's not the head coach here, and his track record at, you know, the position he was actually hired to do is stellar.

Mesko will never be replaced nor forgotten, but Will Hagerup's booming punts will make the pain and loss that comes naturally when a team loses a Space-Emperor a little more palatable.