Michigan returns to South Bend to write the next chapter of this rivalry, this time without a certain beluga coach waddling stalking the home sideline under Touchdown Jesus.  Instead, Brian Kelly - who many will remember as being at least on the "fan shortlist" of desirable coaches to replace Carr - will be coaching the Domers in his first season.  What does this mean for Michigan?  Well, most likely it means that the days of just knowing that Weis would get cute on 4th and 2 and throw wildly deep are over.  It also means that Notre Dame has seemingly done the right thing and hired a coach with a proven track record of success at all levels of College Football, from the MAC to the Big East to...Independent but mostly Big Ten?  I don't know what Notre Dame calls their joke of a status. Anyways, on with the show.

When Michigan has the ball...or "Can Denard do that again?"

Uconn did fun things against the Michigan offense, including keeping 2 safeties deep on certain plays and letting Michigan just run the QB draw against 6 or 7 in the box.  This proved to not be a good idea for Uconn, and allowed Robinson to complete arguably the most productive day for any Michigan quarterback EVAR.  As the game wore on and even my mother with no discernible football knowledge said "there's nothing they can do to stop that #16", that #16 simply faked a run/long handoff.  The defense, after saying "crap here it comes again" then saw the football glide into the waiting arms of T-Robinson for the longest pass play of the day.  The defense was so out of position that Denard could have hit Odoms on the other side, who was also running without a defender in his area code.  This means that the run/short stuff was so effective that the defense, upon thinking it was another run/longhandoff, was content to practically let the entire secondary come up and play run, leaving everything and everyone uncovered.  I'm not sure I've ever seen that, and it speaks volumes to what Denard was able to do to the psyche of that defense.

Notre Dame will likely not allow that to happen, at least schematically.  You can bet that there will be 7 or 8 in the box at all times with the express goal of stopping anything that has dreadlocks and moves at the speed of light.  Without there being a ton of sample data, Kelly looks to employ a similar 3-down linemen scheme as Michigan, but his borders on more of a traditional 3-4 than Michigan's 3-3-5 stack. 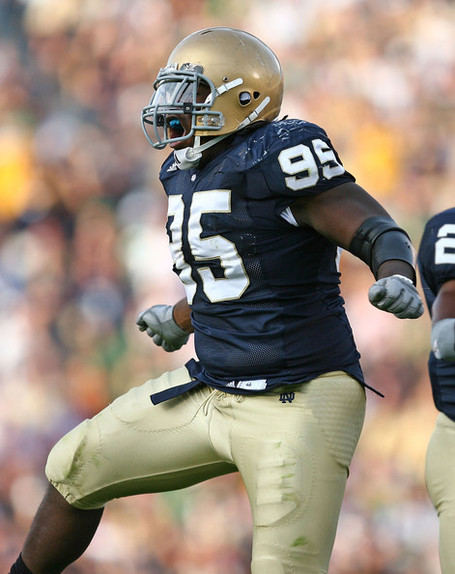 David Molk will be tasked with stopping Ian Williams

Michigan will need to impose their will on these three down linemen.  The 3-4 look that Notre Dame deploys, at its simplest, relies on the down linemen to hold their gaps, and funnel plays to athletic linebackers who can meet the carrier at the point of attack.   If the Michigan Linemen can seal their gaps without having to expend double teams, they should be able to spring into the 2nd level.  If the Notre Dame line starts standing up to double teams, then we're in trouble...obviously.

Molk will likely have the hardest job on the line this game, having Senior Nose Tackle Ian Williams lined up directly over him.  The guards on both sides will likely have to chip him, especially given that Molk is listed at 285, while Williams checks in at 305.  Molk was successful last year in standing up to Williams, but the weight differential and the rehabbed knee makes this a huge matchup to watch.  If Notre Dame starts getting penetration up the middle, it just limits what Michigan can do in terms of blocking on the outside; that Defensive End doesn't need to crash down the line if the Nose is crushing the point of attack already.

Another point of notice is the fact that the Notre Dame defensive line averages around 290 lbs, while the Uconn line averaged around 260 lbs.  There is just significantly more meat to throw around for the Michigan Offensive line.

The Notre Dame secondary has come in for some usual fluffy praise after Purdue, and they might have a point, but it's not likely that the secondary has gotten any better necessarily.  The old scheme, under TEENOOTAA BLITZ, left the corner's on an island, whereas now they're often getting safety help.  However, if the Michigan running game has a day like they did last week, this will be rendered moot; the safeties will be so far up towards the LOS that the corners will still be on an island.  If Denard has to throw into tight windows because the run game isn't sucking up the secondary towards the LOS, the offense will probably be in trouble.

So can the offense replicate their performance against Uconn against Notre Dame?  Probably not; at least not as efficiently as they were able to against Uconn.  The defensive line of Notre Dame is significantly heavier and more experienced than that of Uconn, the linebackers are likely more athletic and faster.  The secondary remains an issue for the Irish, but - while Denard had a great day throwing to mostly wide open targets in the opener - if he has to fit into tight windows against double coverage, my confidence wanes significantly.  This is NOT to say that we won't put points on the board, but a replication of last week where Uconn forced exactly ONE punt seems unlikely.

When Notre Dame has the ball

The emu is no longer, and replacing him is Jr. Dayne Crist, a former 5 star quarterback from California.  Running Brian Kelly's offense, he looks a bit like what I envisioned the Rich Rodriguez offense would look like had Mallett stayed.  It's certainly a spread, features shotgun almost exclusively, and even looks (to my admittedly untrained eye) to have a little bit of read-option mixed in.  Michigan should have some very good experience defending this offense; it's pretty similar to what they run without the bedreadlocked speedster at the helm.  Crist is surprisingly mobile given his size, and getting pressure on him will be key to throwing off the Notre Dame attack. 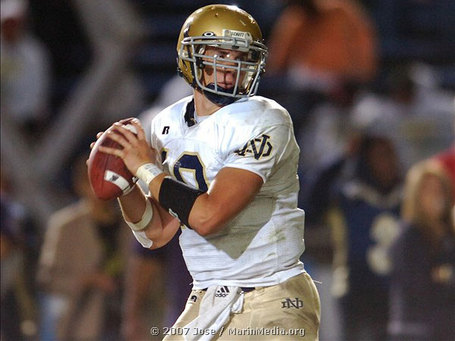 Gap control will be key along the line, and Ezeh/Moundros's ability to step into any holes will be crucial to stopping the Irish running game with Armando Allen.  Last week, Ezeh was (surprise!) out of position on some plays, giving the Uconn rushing attack some extra room to work with.  This week, that can't happen.

That being said, stopping the Notre Dame rushing attack isn't really my primary concern.  My primary concern exists at 6'5" and runs the outside routes.  His name is Michael Floyd, and he eats cornerbacks (for real).  Our undersized, outmanned, and inexperienced secondary is likely in for a long day, especially if our blitzes aren't reaching, and we can't get pressure on 3-man rushes.

Protecting Crist, however, is an offensive line only featuring two returning starters.  If the Michigan defense can create confusion on the line, or if Mike Martin has one of his "MARTIN DESTROY" days, then hey, maybe Floyd won't have a huge day.  You are allowed, however, to hold your breath when Crist drops back in the pocket and Michigan doesn't look like they're going to get pressure.

Michigan has the ability to "bend don't break" in this game, but they're likely going to require some help by Notre Dame, either in drops or inaccuracy.  If Notre Dame has 2 or more big plays down field, it's going to be tough sledding.  I expect ND to put up a lot more points and yards than did Uconn.  Forcing turnovers and taking advantage of any Notre Dame mistakes will be crucial.  Also, on third down, let's get off the damn field.

This was very near to disaster last week.  I expect improvement because hopefully it won't be sunny and 70 with a windchill of negative 8.  Also:  HOLD ON TO THE DAMN BALL

I had this pegged as a loss before last week, and I remain unconvinced of the Michigan offense.  Uconn was completely and totally unprepared for the unleashing of Denard Robinson.  Notre Dame will not be as unprepared, but then, it's tough to prepare against a guy that can't really be replicated no matter how much film you've watched.

So here's voting with my heart:

Molk vs. Williams:  If Williams gets significant push, or we have to double him regularly, we're in trouble.

3-man rush vs. Offensive Line:  If we can make Crist uncomfortable, then he won't have time to find the wide open receivers streaking downfield.

Michael Floyd vs. The Black Hole of Michigan Secondary:  If Crist connects with Floyd on more than 2 long plays, we're in trouble.

Rock/Paper/Scissors vs. Kelly's 3-4:  Last week, Denard was throwing to mostly wide open receivers resulting from the devastating run game that forced the defense to suck up into the LOS if he so much as took 1 step forward.  If he starts averaging 6 yards per carry, then our scheme will allow him to continue to throw to those wide open receivers, which makes me a happy guy.

Michigan vs. First Away Game:  Don't turn the ball over.  Please.

Miller Light:  you can drink 15 of 'em, and the cans don't do too much damage if thrown/toppled.  Remember - the key here is to chuck the empty ones.

At 3:30 tomorrow, you've got Ace Ventura: When Nature Calls on Comedy Central.  Just in case, you know.

Given it's Notre Dame, the remote control is now at threat-level red.

Syncing the mgoblue.com broadcast to your television, and muting the dribble of the NBC broadcast.