On Tap: Your Friday Drinking Instructions Are Feeling Sentimental

Share All sharing options for: On Tap: Your Friday Drinking Instructions Are Feeling Sentimental

We take so much for granted.  Case in point; this weekend's Michigan-Notre Dame tilt.  So many assume that this is a rivalry that spans the decades and, from an animosity standpoint, there is certainly a great deal of truth to that; One-time Michigan coach/AD, Fielding Yost, and his [supposed] anti-Catholic sentiments are considered to have been the deciding factor in blocking Notre Dame from Big Ten membership (and for all intents and purposes, creating the model that led to Notre Dame's storied success).  From a practical standpoint, however, this is a series that is a relative newcomer to the stage.   The two most storied programs in college football history are separated by a scant 148 miles, yet prior to the late 1970's the schools had faced one another on the gridiron only a handful of times.  Asides from last year's thriller... just in case you had forgotten...

...aside from that, this series had featured as many stinkers as good games for the better part of the decade.  For younger fans this is a real shame because so many ND-UM meetings had been epic collisions for most of the 80's and 90's.  Tomorrow's game offers hope that the glory days of Michigan are back or at least just around the corner; Rich Rodriguez's spread Denard Robinson completely throttled a well-coached UConn squad while Notre Dame was never really threatened by a Purdue team that some idiots felt would challenge for the Big Ten's upper echelon.  So let's stop with the pre-game posturing for a few moments and reflect...but first, you'll need something to drink. 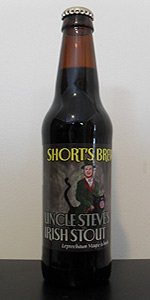 Yes, the Fighting Irish are yiffers.

As we have opined numerous times, Michigan (and Wisconsin) is at the head of the beer-making class.  It would figure then that a Michigan brewery would be churning out a style (the Dry Irish Stout) that, despite the ubiquity of Guinness, is a rather uncommon product for breweries outside of the Emerald Isle (remember last week's little lesson on how regional water character impacts brewing decisions?  Ooh!  Learning!).  Like most well-made Irish Stouts, this brew is full of roasted, chocolaty flavors with the unmistakable acrid (if even slightly sour) finish unique to the style.  Many are surprised to find that, despite the full-flavored profile, these beers are often at the lower end of the alcohol spectrum.  Hence, they are ideally suited to the long-term (or "session") drinking that provides the social lubrication for the classic pub/tailgating experience.  The only bad news is that Short's is still only available in Michigan, although widely so, which will limit the acquisition of said beer to the lucky people of Michigan and those of you making Wolverine road trips.

So aside from the obvious Irish style (Notre Dame) made in Michigan (U of M) angles, why is this so appropriate for tomorrow's game?  As we had previously noted, Notre Dame's encounters with Michigan have helped to shape the love of college football for many fans in their late 20's, 30's regardless of school affiliation.  Two of the most iconic uniforms, fight songs, stadiums and histories are sheer overload for those of us who love the heritage of the sport.  The dramatic downturn in fortune for both programs in recent years has led to a great deal of glee for those of us with no attachment to either university.  Yet for the same reason baseball is better when the Yankees are good or that the health of the NBA cannot be better than when the Celtics and Lakers are meeting in the Finals, we garner more enjoyment from college football in the long term when Michigan and Notre Dame are strong (although, please, by all means keep having an embarrassing season here and there just to feed our Schadenfreude).

The point is, we want you all to reflect on why this game is so special on the eve of its yearly renewal.  Think about what makes this game special to you.  Similarly, before you pound a small fishtank's-worth of beer tomorrow, take tonight to think about the beverage in your hand.  Our first drinking love, the beer that told us there could be more to beer than quick and copious consumption (alliteration, ftw!), was a Dry Irish Stout (Guinness, of course).  While it is no longer in our drinking repertoire, it continues to hold a special place in our liver & kidneys heart and marks the moment when we became a big boy.  Waxing poetic has never been our strong suit, so we'll turn it over to a man who has made drinking an almost zen-like activity.

Whether you play like a champion or Go Blue... do go forth and drink!