The Arrival of Penn State in Division One Hockey - Why Everyone, Including Michigan Hockey Fans, Are Freaking Out

Share All sharing options for: The Arrival of Penn State in Division One Hockey - Why Everyone, Including Michigan Hockey Fans, Are Freaking Out 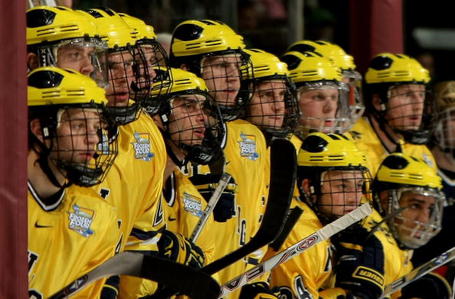 [To be honest, I'm a little tired today after watching (and rewatching) the Michigan Football team struggle with UMass, so football's kinda overloaded me a tad. The cure? Hockey. Hockey is a miracle cure for the football obsessed. Especially when you're playing it or getting ready for the CCHA season to drop the puck. So we're going to take a small break from our football coverage (for this post only, of course) to talk a little hockey.

Last week Penn State sent shockwaves through the NCAA hockey world, and as a result the American and Canadian junior hockey systems, by announcing that it will be starting both a Men's and Women's hockey program (complete with shiny new rink) by the 2012 season. This is a big deal, but to be honest, all the behind the scenes stuff and potential outcomes are still a bit of a mystery to me.

These are not things, however, that in any way fluster Friend of Brew, Windy City Wolverine. As a matter of fact, he's provided me with more information than I can hope to digest on the subject of what is about to happen in college hockey. To wit, a three part series is on it's way (entirely courtesy of WCWolverine's outstanding writing). Why three parts? Because it'd take too long to write it all at once and there are just too many different scenarios to cover in a single post. Here's how it's going down:

Part I – Why Are People Freaking Out?
Part II – Penn State’s Arrival – What COULD Happen
Part III – The Crystal Ball: One Plausible Scenario, With the Good, the Bad and the Ugly

As you may know, Maize n Brew Dave is quite the hockey fan, and you’ll occasionally see a story or two about Michigan hockey around these parts.  Since I’m probably one of the few people visiting this site who are bigger Michigan hockey fans than he is, Dave asked me to chime on the minor tsunami that hit the western half of U.S. college hockey over the last couple of weeks.

I’m not going to pretend that college hockey is that big of a deal to most college sports fans.  For many schools with Division 1 college hockey programs, hockey is to Ringo Starr what football is to the Beatles and Elvis joining forces and having the Three Tenors doing backup vocals.  For schools with no hockey program, if you replace Ringo with the most junior guy who cleaned up at the Beatles’ Shea Stadium concert, then you might be in the ballpark.  So when ESPN has a college hockey story on its home page, it’s probably worth at least a column or two.

Penn State announced that, thanks to an $88 million give from alum Terry Pegula, it will start both men’s and women’s varsity hockey programs with both programs ready for competition by the 2012-2013 season.  Penn State will also be building a state-of-the-art on-campus hockey arena, with a seating capacity in the neighborhood of 6,000 or so. To those who follow college hockey, as Joe Biden would say, this is a BIG F****** DEAL.

Here’s some perspective.  There are currently 58 men’s hockey programs in D-1—less than what is needed to fill out a women’s basketball tournament bracket (Note:  If you have everdone this, please seek propfessional help.  Now.).  You can literally count the number of programs from "BCS schools" on your hands, even if you suffered some horrific accident involving farm machinery and a couple of your fingers when you were a child.  With these facts in mind, plus the ever-present Title IX concerns, ANY addition to Division 1 hockey becomes a big deal.  When the newest D-1 member has a larger enrollment than 56 or 57 of the current schools (it’s close with Minnesota), you have a major earthquake on your hands.

You would think that the entire college hockey world would be thrilled with a new, high profile member.  Think again.  This really doesn’t have much to do with Penn State per se.  And no, this isn’t related to the hockey snobbery you hear from the Canadian hockey purists or the wannabe-Canadian (aka New England, Michigan and Minnesota)hockey purists who think that anyone who hasn’t been on skates since the second trimester of their mother’s pregnancy isn’t worthy of a local team.  What the brouhaha all comes down to is a single acronym, BTHC. As in "Big Ten Hockey Conference."

Currently, there are five Big Ten schools with Division I hockey programs—Michigan, Michigan State, Wisconsin, Minnesota and Ohio State (Although calling OSU a D-1 program for most of its existence might have been a stretch).  Under the Big Ten rules, there can be no official Big Ten championship unless half of the member schools fielded a team.  The participating schools have therefore led a rather unique existence.  Wisconsin and Minnesota are in the Western Collegiate Hockey Association (WCHA), while the Wolverines, Buckeyes and Spartans are members of the Central Collegiate Hockey Association (CCHA).

Having Big Ten schools in separate conferences isn’t the only thing that makes this unique.  To someone not familiar with college hockey, what REALLY sticks out are the other teams in these conferences.  In the CCHA, you have schools such as Ferris State University, Lake Superior State University (enrollment 2,907) University and the University of Alaska Fairbanks (yes, as in the state of Alaska).  To put this in perspective, Ohio State’s enrollment is larger than the combined enrollment of the FIVE smallest conference members.  The WCHA is similarly structured, with Wisconsin and Minnesota going to battle with Colorado College (enrollment 1,950) and, as of this season, Bemidji State University.

With both conferences having solid histories (the WCHA more so than the CCHA), this arrangement resulted in some unusual but very special one sport rivalries, particularly on the WCHA side, where the North Dakota Fighting Sioux To  Be Determined are among Bucky and Goldy’s biggest rivals (and in the early 1990’s the same could be said for Lake Superior relative to Michigan and Michigan State).  This has also allowed several smaller programs to flourish at the Division 1 level, as schools such as North Dakota, Lake Superior, Michigan Tech and the University of Denver all having at least periods of great success (Lake Superior has the same number of NCAA titles, three, as Michigan State. Which is incidentally, three more than the Buckeyes).

So why are people scared about Penn State and calling the BTHC a four letter word?  Because the Big Ten’s bylaws now allow its schools to leave their current conferences.  IFa BTHC forms, some of the smaller schools comprising the WCHA could be facing a very new, very dangerous world.  A world where there is no guarantee of having Minnesota or Wisconsin visiting a place like Houghton (Michigan Tech) ever again, and these teams losing some of the biggest revenue producing games on their current schedules.

The same is true for most of the CCHA (although I doubt that Notre Dame will have to beg for a home and home with Michigan or Michigan State).  The smaller schools are likely to lose other revenue as well, as the money in the current league TV contracts is driven heavily by the big name schools, and most of the best draws in conference tournaments are—you guessed it—the Big Ten schools.  Throw in the broader exposure for the BTHC via the Big Ten Network, and the recruiting challenges many smaller schools already face become significantly worse.

Put all of these concerns (and others) together, and there is a real fear about the long term viability of many smaller programs surviving at the D-1 level.  With few, or no, "guaranteed sellout" home draws, reduced revenue from the conference tournaments and television, and a huge disadvantage when it comes to media exposure, it is easy for college hockey fans to identify 2-4 teams that are prime candidates to fold.  And if you think this isn’t a big deal, keep in mind that over 25% of D-1 teams already make the 16 team NCAA tournament, one of the most generous allotments in Division 1.  If the number of varsity programs drops much, then we could be going back to a 12 team tournament before too long.

So, what does this mean when the D-1 puck is dropped for the first time in Happy Valley?  I’ll look at a couple of possible scenarios in part 2 of this story, along with some of the positive and negative effects of each.