Share All sharing options for: Preview: Bowling Green vs. Michigan

Michigan wins early and easily, final score somewhere in the neighborhood of 45-13.  Denard only plays the first half.  We see significant Gardner, and Tate gets his first series of 2010.  Mouton kills somebody, Cam Gordon rebounds to have a nice, confidence building outing, and Kovacs gets an INT.

Yeah, that was fun.  As it turns out, the video posted of the App State HORROR blocked field goal was much more apropos than the drubbing of Delaware State.  That's why it's fun to play these 1-aa teams; you're never quite sure what you're going to get!  Wheee!

This week, Michigan takes on Falcons of Bowling Green State University, which until last week was another game for Denard to get his shake on before the Big Ten conference, but after last week has become a game that we're all probably a little more nervous about than we'd care to admit.  Michigan and BGSU have played once before, in 2000, and the score was 42-7.  Here's hoping.  The line is Michigan by 25.5 points, so Vegas seems to think that Michigan's in good shape.

The Falcons, as BGSU are known, are an FBS team out of the MAC conference who play in the East division.  Prior to 2008, Michigan could claim that they had never lost to a MAC team, but in our post apocalyptic Lloyd Carr world, we can no longer say that.  Last week, I posted a video of App State because I wanted to make it seem like the Umass game was important and that we could lose.  After the giant poop of a game performance last week, I probably don't have to post the highlights of Toledo to make it seem that this is an important game, but here they anyways because...I guess I'm sick like that.  The lyrics are probably NSFW.  I didn't stick around long enough to find out.

So yeah, that happened.

BGSU has had their share of success in the MAC, but haven't taken home a conference championship since 1992 when they went 10-2.  They beat Nevada-Reno in the Las Vegas bowl that year, which, woo?  Their latest bowl game came in 2009 (hey - that's better than Michigan!) when they lost a heartbreaker 43-42 to Idaho in the Humanitarian Bowl.

Rivals for Bowling Green include Toledo (shudder) and Kent State.  They play Toledo for the "Peace Pipe" which is among the more awesome things I've read today.  I can picture Brent Musberger calling the game now:  "And we're back at the BATTLE OF I-75 where Bowling Green and Toledo will be playing for the Peace Pipe!"  I am PUMPED.

Making things a little easier on Michigan this week is the fact that starting quarterback Matt Schilz will not play on Saturday:

"He’s going to be out this week," BG coach Dave Clawson said. "He will not play against Michigan, and at this point we’re ‘wait and see’ as to when we’ll get him back.

The starter for Saturday hasn't been announced, but is between Sophomore Aaron Pankratz or true freshman Trent Hurley.  They run a spread offense, but with Pankratz at 6'6" 221 and Hurley at 6'5" 210 lbs, I don't foresee a lot of spread and shread.  If Schilz's stats are anything to judge by, expect a lot of passing attempts; Schilz was averaging over 35 attempts per game, and completing them at at close to a 65% rate.  However, before visions of 3-step drops and zippy little throws to receivers who hang out under 10-yard cushions start causing you to get a little weepy, neither Hurley nor Pankratz are Schilz, who was the starter for a reason.  When your coach is saying this:

"This year, a clear No. 2 never really emerged," Clawson said. "I said at the end of pre-season that the issue wasn’t, ‘Who is our starter?’ It is ‘Who is our back-up?’ Really it was between Trent and Aaron.

Well, take it from a Michigan fan who has experience with such matters...it ain't good.  However, when Hurley took the reins for BGSU last week against Marshall, he directed the offense for 121 yards, so maybe he's a little better than I'm giving him credit for.  For their part, the BGSU offense has been mediocre, ranking 52nd in the nation at just over 30 points per game (Michigan is 37th).  How much this matters with a non-established back-up at the helm remains to be seen.  For Rodriguez's part, he's not taking them lightly (Freep link, if you care):

"They have really good skill players," Rodriguez said Monday. "All their wide receivers make plays. I'm really impressed with their running backs, their quarterbacks have been good. They're going to pose some of the problems we've had this season, we're going to see that this weekend."

While this sounds mostly like Coaching boilerplate, it is true: if Bowling Green runs their offense they way they want to, they will exploit some of the problems that Michigan has had this season - namely the fact that our corners have spent much of their time in a 10-yard deep shell while allowing the exact kinds of 5-7 yard passes that BGSU wants to run. Rodriguez is likely most concerned with senior receiver Kamar Jordan who leads the nation(!) in receptions at 37.  Meanwhile, the Michigan secondary has allowed 61 catches for 808 yards and 4 TD's.  This matchup will be one that BGSU will try to exploit.

As for the running attack, BGSU is languishing at 111th nationally, averaging only 83.3 yards per game.  The first two games they played, they were behind and thus throwing more, but still...that's not good.  Leading the attack is Willie Geter, a junior out of Miami Florida.  Also, PRISON ABS: 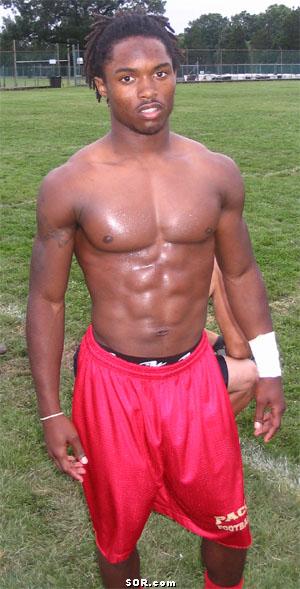 Geter vs. Marvin Robinson in a cage-match would probably result in the awesomest Old-Spice ad imaginable.  Anyways, he's got 243 yards rushing this season with 2 TD's.  At 5'8" 175 lbs, he's more of a slasher than a pounder, and is dangerous out of the backfield as a receiver, with 10 catches for 104 yards so far on the year.

What does this mean?  BGSU will probably go on more than one longish drive that includes several annoying 6-10 yard completions to zippy little receivers and Geter out of the backfield.  These drives will likely include several annoying 3rd and 4 conversions that threaten both my sanity and television set.  Mike Martin will do his thing, and create some problems for the newly installed BGSU quarterback, but lack of pressure has been a problem for this defense all season, and if it doesn't get better, BGSU has at least the capability of picking us apart.  Michigan safety Cam Gordon called last week a reality check, and according to the Mgoblog UFR (more definitive than we're ever going to get...) the linebackers were mostly responsible for the Umass cockup.  So - go linebackers?  Go linebackers.

The BGSU offense is a backup quarterback, a running game made of prison abs, dreams, and copious amounts of tape, and some leetle receivers who catch 5 yard crossing patterns against our equally taped secondary and linebacking corp.  A word to describe the BGSU offense vs. the UM defense probably doesn't exist, but "sloppy" is a start.

Like every single other defense that Michigan faces this year, BGSU will be (surprise!) keyed in on Denard Robinson:

"He's extremely elusive and has the ability to make people miss," Clawson said. "It's almost like defending a two-back run game out of a one-back set. [Michigan] creates a whole different set of problems because of the ability to run the quarterback."

Given the following chart of the Michigan offense (100% accurate), this is probably not a bad strategy: 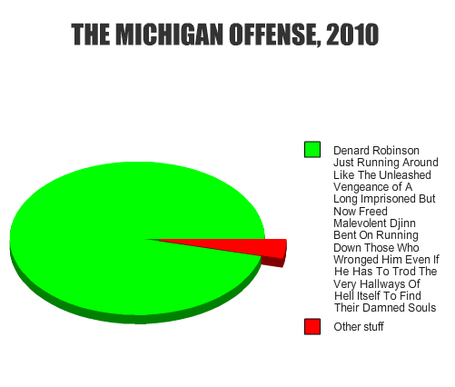 BGSU's leader, linebacker Eugene Fells, doesn't appear too concerned, saying that they're just going to "do what they do...go out there and make plays."  If by "making plays" he means "forcing turnovers," his confidence is well warranted.  The BGSU defense has forced 9 turnovers so far on the season.  Fells, a senior from Florida, is responsible for one of those turnovers with an INT to his credit this season.  He's also got a sack, 1.5 TFL's, and 22 total tackles.

Despite the turnovers, which put BGSU ranked 37th in turnover margin nationally, they have the 94th ranked scoring defense, yielding 30.3 points per game.  Trending even worse for BGSU is their 97th ranked rushing defense.  Robinson, on his own, leads the nation with 559 rushing yards and has completed nearly 70 percent of his passes for 671 yards. As a result, Michigan is sitting at sixth in the nation in rushing with 286.3 YPG and 10th in total yards at 510 YPG.  This offense - finally a nationally relevant, nationally terrifying offense - is going up against a unit that is averaging 465 total yards allowed per game.  Denard is going to have a big day, but like Umass, I expect the game plan to involve heavy doses of Shaw and Smith.

I am literally copy-pasting this from last week's preview:

HOLD ON TO THE DAMN BALL

Also - that blocked punt was scary, but with Rodriguez's unwavering faith in Will Hagerup, it's hard to be too concerned:

Rodriguez said he's sticking with Hagerup. ... "We will be in front of a lot of people, but in reality it is just another football game,"

Also, per Rodriguez, the kicker who approached him in a parking lot to get a try out isn't "cleared yet" and hasn't "passed the physical."  That means, um, that he's likely going to be on the team.  Rodriguez should go for it.  Like, alot.

Like Umass last week, BGSU is treating this game as an opportunity to shine on a big stage:

"It's that once a year shot on a very big stage in front of a lot of people," Clawson said. "We need to make the most of our opportunity, and with any great opportunity there's usually a challenge."

Michigan is going to get to get Bowling Green's best shot.  That being said, I can't see a defense that is hovering near dead last nationally stopping an offense that is hovering near nationally best.  BGSU is going to go on some long drives, and may limit Denard's effectiveness by virtue of keeping him off the field, but after last week saw UM put up 21 points in 3 minutes of game time, I doubt that it will be enough to actually threaten Michigan's scoring machine.

Linebackers get some redemption from last week's debacle, Kovacs has another play that forces me to google-image search "grit", Tate and Gardner get in during the 4th quarter, Stonum catches another deep ball for a TD.

Dink and Dunk passing attack vs. Michigan linebackers/secondary:  Will Michigan force BGSU to punt, like, ever?

The Kicking Game vs. The Unexplained Mystery that Shrouds Certain Positions in Uncertainty and Horror: Will Michigan make a field goal this season?  Stay tuned to find out.

Orange Juice.  Vitamin C, baby, that's what I'm all about.  For the kiddies, you can dilute it with water to make it a bit healthier with less sugar.  It also cuts the vodka to appropriate amounts for the youth of America.

After last week, we escalate to Orange.  There have been some direct threats against the remote.