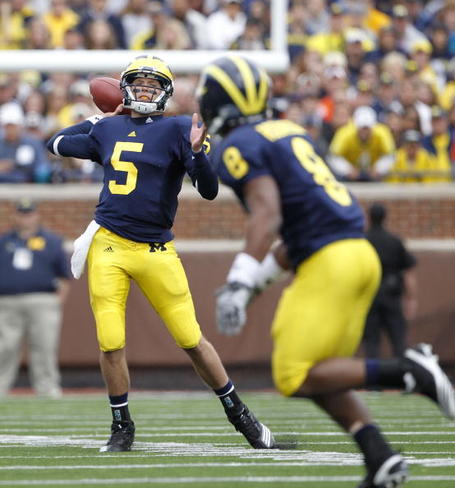 Sometimes it takes a while.

They say that the true sign of character is not how hard you can hit, but whether to get back up when you've been knocked down. Over the years there have been different permutations of this saying, and the most common tend to focus on how quickly you get back up. Speed equating to resilience and character. In reality, however, life doesn't work on such short timelines.

When you get punched in the mouth, literally or figuratively, there are a lot of things that can keep you on the turf. And those things can take longer to sort themselves out than other people would like. In the case of Tate Forcier and the Michigan Defense, soon enough had come and went in the eyes of many. The defense would be the anchor that dragged down the season. For Forcier, the off season had sealed his fate. Those things had or were being written prior to Saturday.

But redemption isn't a speedy process. Sometimes it takes a while.

A year removed from his own 4-0 start as Michigan's primary signal caller, Tate Forcier finally stepped out onto the field as Michigan's quarterback. It wasn't as the starter, it was as a back up in a game Michigan had to win. Midway through the second quarter on Saturday, Rich Rodriguez called Forcier's number, and Tate joined his teammates as he trotted out to the field. When he did, he returned to a standing ovation from the 109,903 Michigan fans that packed Michigan Stadium on a sun splashed Saturday. After months of speculation about his future, his commitment, and his character, Forcier's mere presence on the field this weekend answered any remaining question about the kind of young man he is. He's a Michigan man.

He's also a damn good quarterback. Relieving Devin Gardner and Denard Robinson, Forcier took the keys to the offense and drove it like an F1 racer. His final line (110 passing yards, 30 rushing yards, and 1 TD) may not look too impressive to the untrained eye, but it was. Forcier led the offense for four drives, and scored touchdowns on each one. The most catharic of which had to be a two yard touchdown pass to fullback John McColgan, Forcier's first touchdown pass since last season's loss to Ohio State.

That must've seemed like a life time ago to Forcier. A November ago while throwing on a bum shoulder and playing behind a line comprised of cheeze whiz, duct tape, and injured linemen, Forcier was repeatedly battered by Ohio State's defensive line. The result was a five turnover day that  he undoubtedly plays over and over again in his mind. Flash forward to September 25, 2010, and it is clear what transpired in the past will stay there.

Forcier was perfect on the day, posting a perfect 12-12 throwing the ball. More importantly, Forcier displayed a maturity in the pocket he seemed to have lost as last season progressed. He ran without fear and picked up 30 yards on well timed scrambles and proper zone reads. His throws were crisp, his reads were correct, he was accurate, and he actually seemed to be having fun out there.

Midway through the fourth quarter, it was time for Forcier to come out of the game. When he was finally called to the sideline, he returned to another standing ovation. This one even louder than the first. Sure, Rodriguez could've replaced Tate before the start of the drive with Gardner and no one would've batted an eye. But he didn't. He let Tate start the drive, run a play, and come out to the applause he rightfully deserved. It was a nice moment and a testimony to why Forcier has stuck it out, and why his father said this:

I really think Rich Rodriguez is trying to make a true leader out of him on and off the field.

Forcier's ability to pick up where he left off, to execute the offense efficently and effectively, makes this team even more dangerous. Sure Denard Robinson keys this offense and makes it the dragon slayer we all believe it to be. But the luxury of having a second starter, not a backup, means that Michigan is far more dangerous this year than it was in 2008 or 2009. This is a good offensive team, whether Denard or Tate are taking the snaps.

But moving away from the bigger picture, if only for a moment, it's nice to reflect on what transpired for this young man and for this team. Tate has proven to everyone that he is All In. On Saturday his dedication and hard work were rewarded. Sometimes it just takes a while for it that to happen.

Likewise, Saturday was a day for the defense to demonstrate to everyone that they too are resiliant and proud. A week removed from one of it's worst performances in three years (439 yards and 35 points to a FBS team) the Defense limited Bowling Green to 283 total yards and 21 points. More importantly, the linebackers returned to the form they displayed agaisnt UConn and Notre Dame, leaving their UMass performance buried under a pile of tackles and a tiny line of 32 rushing yards on 27 carries.

The day had to be especially catharic to Ryan Van Bergen and Jonas Mouton. Last week against UMass both were subject of some heavy criticism and had two of the worst days of their Michigan careers. In response, Mouton posted 7 tackles, 1 TFL, 1 Sack and an INT. More importantly, Mounton played the position as well as he has all season. This was not the over pursuing, angle destroying hapless linebacker we saw a week ago. Mouton was controled. He was in position. He was aggressive. It was wonderful to watch.

Likewise, Ryan Van Bergen was a force the entire game. Registering only a sack, Van Bergen's contribution doesn't really appear on the stat sheet. But it did appear in Bowling Green's backfield. Van Bergen, despite double teams, constantly collapsed the BGSU pocket, forcing errant throws and ill timed roll-outs. He single handedly plugged running lanes and held ground until his teammates to complete the wrap up of BGSUs backs. He was controled. He was in position. He was aggressive. It was wonderful to watch.

A game ago critics and concerned fans were preparing to sing "Swing Low" when they discussed the defense. How woudl they stop anyone? A year ago, it was obvious that Michigan didn't have an answer. This year seems different. On Saturday Michigan's defense had it's momentary lapse (the tunnel screen turned touchdown), but after a single 71 yard mistake, the defensive starters and backups put the clamp down on Bolwing Green and for the first time this season looked dominant in the process of doing so. Michigan manhandled a team it was supposed to beat. Maybe we'd feel better about it if that team had been UMass, but let's face it, between BGSU and UMass, pick the real FCS football program.

Saturday was a day of redemption. A chance for Michigan's defense to show it had pride and to restore some faith to the believers. It was also a day for past heroes to re-emerge from the shadows and whatever malaise that had kept them down. Tate Forcier showed his character and his ability were equal parts. And as the chorus of The Victors rained down onto the field over and over again, you could see some of the ghosts of seasons past slowly fade away.