Penn State's Effect on Division One Hockey Part III: The Crystal Ball, What May, Could & Will Actually Happen!

Share All sharing options for: Penn State's Effect on Division One Hockey Part III: The Crystal Ball, What May, Could & Will Actually Happen! 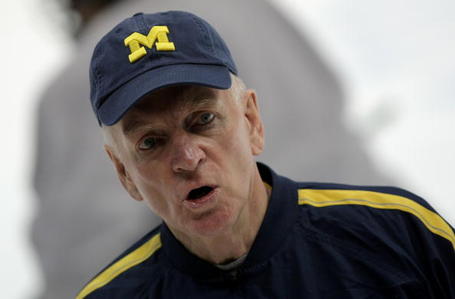 The Past is the Future. The Future is the Past. Either way, I'm making you skate till you puke.
Photo via Doug Pensinger/Getty Images Sport

[The Final-ish Installment of our three part series on the addition of Penn State to Division I College Hockey from Friend of Brew, Windy City Wolverine. It's a three part series, and it's time for Part III:

Part I – Why Are People Freaking Out?
Part II – Penn State’s Arrival – What COULD Happen
Part III – The Crystal Ball: One Plausible Scenario, With the Good, the Bad and the Ugly

Enjoy. It's pretty awesome. Oh. And if you like the series please leave comments in the comment section so that I can coerce WC Wolverine into writing more of these things!]

OK, now that I've laid out what has driven the college hockey world into a tizzy and some of the ideas being discussed for the next few years, it's time to get to the fun stuff and take out the crystal ball.  First, it's time for some disclaimers.  Nothing herein is based on any inside information.  This is, howyousay, pure scpeculation.

At the same time, everything other than the obvious jokes have at least a smidgen of basis in reality (a previous story about a new D-1 program, a scheduling conflict, etc.).   As a result, if you were able to somehow put all of the variables into a mathematical formula and ran a thousand simulations, I'd be willing to bet that you'd see something like what I'm about to lat out more than just a few times.  Yes, some of the names, dates and locations may change, but some of these themes are quite likely, warts and all.

And here is warning - a couple of schools are not going to be painted in the best light.   I'm sure a few people may scream bloody murder about a couple of characterizations.  But believe me, none of this is personal.  The crystal ball doesn't have it out for anyone here. I'm just looking at past history, reported rumors, current statements and conduct, and just a touch of "why the f*** not" intuition to decipher the crystal ball's true intentions.  If you can't take the heat, well I guess that's what Internet message boards are for, aren't they?   With the disclaimers out of the way and the body armor in place, let's get it started.

The Crystal Ball tells all about college hockey after the Jump.....

October-November 2010 - After the first regularly scheduled Big Ten meeting following Penn State's announcement, conference officials spend forty-five minutes discussing the color scheme for the "Big Ten Conference Football Championship Game" logo.  Oh yeah, they also release a written statement that, although there is a hope to have "some sort" of Big Ten hockey championship in the future, it will be some time before a decision is made as to when this occurs and the form that it will take.

January 2011 - During a Q&A session about the new Lincoln Haymarket Arena, Nebraska Athletic Director Tom Osborne notes that, although Nebraska has no intentions of starting a Division 1 hockey program, the seating footprint will allow for the installation of an ice sheet at some point in the future...if circumstances change.  The USCHO server melts down.  Literally.

2011-2012 - As Penn State begins hiring recruiting its inaugural scholarship hockey class, all stays quiet on the BTHC front.  Other than Barry Alvarez making comments about how he "can't wait to have the Cal-Poly's of the hockey world" visit Madison more often and Big Ten domination, news is extremely sparse.

October 7, 2012 - The puck is dropped on Penn State's first official NCAA hockey game in half a century.  Terry Pagula and Joe Paterno perform the ceremonial puck drops, with JoePa rambling more incoherently than normal about his tough game against Temple the next night.  His aides cut off his mic and wheel him away before the opening faceoff.  The rest of Western college hockey has entered full panic mode in response to the Big Ten's silence.  CCHA Commissioner Tom Anastos, noting that Penn State has remained silent about the conference's overtures, states that the conference is willing to "wait it out" for the Nittany Lions.  Not realizing that the microphone is still on, the college hockey world hears him mumble "like we have a choice" /eye-roll/.

October 17, 2012 - The reason for the Big Ten's silence becomes clear, and in a big way.  Five years after the initial approval, Indiana University announces that it has secured sufficient funding to begin construction of an 18,000 seat replacement for Assembly Hall.  As part of the project, IU states its intention to install ice making equipment in the new arena and begin a varsity men's hockey programs in the 2015-2016 season, using the "Ohio State model" as an example.   This is followed less than a month later by Illinois' announcement that it is giving up on its long-delayed plans to renovate its own Assembly Hall, and announces its plans to build a multipurpose arena.  With regard to hockey, Illinois AD Ron Zook (JUST KIDDING) notes that "given the Illinois club program's success, it's only natural that we would want to elevate the program back to varsity status.  Icemaking capabilities are planned for inclusion into the new arena, but it is stated that no varsity program will begin until endowments for half of the desired men's and women's hockey scholarships are secured (the state's March 2012 bankruptcy makes this a necessity).

December 2012 - The Big Ten announces that a "mini-BTHC," with a 12 game schedule among Wisconsin, Minnesota, Michigan, Michigan State, Ohio State and Penn State, will take place in 2014-2015 and 2015-2016.  Indiana, having requested time to begin building its program, will not be included in the mini-BTHC, but will play a few nonconference games against Big Ten competition in its first season  (At Mariucci, they agree to salute the Gopher bench and shout "WE WHO ARE ABOUT TO DIE, SALUTE YOU" (Gladiator style)).  A full BTHC will begin play in 2016-2017, with Indiana included.  CCHA and WCHA schedules drop to 24 games, with the Big Ten schools remaining in the conferences until the full BTHC gets underway.

January 2013 - Penn State announces that it will remain independent until the full BTHC begins play.

February 2013 - The CCHA accepts Alabama-Huntsville for membership, effective for the 2013-2014 season.

Summer 2013 - Ferris State and Lake Superior State both announce that they are "continuing to evaluate all of their options for their athletic teams.  Shortly thereafter, Michigan and Michigan State state their intention to "continue regular series against the Michigan-based CCHA schools" after the BTHC begins play.

Summer 2014 - Under pressure from the state legislature, Minnesota announces five year scheduling agreements for games against Minnesota State, Minnesota Duluth and St. Cloud State, with guaranteed home games for the opposing schools (although the number is TBD), once the BTHC begins play.  Wisconsin announces similar arrangements with Northern Michigan and Michigan Tech, although some road games will be moved to Green Bay.

2014-2015 season - Minnesota wins the first BTHC Championship in decades.  Michigan and Michigan State agree to five year contracts for home and home series with Ferris State and Western Michigan.    Agreements in principle are made by the Wolverines and Spartans for "periodic" trips to Northern Michigan and Lake Superior.  Lindenwood University announces its intention to begin Division 1 ice hockey and to apply to the CCHA.  Mercyhurst college of Erie, Pennsylvania also applies for CCHA membership in 2016-2017.  Both are accepted.

Summer 2015 - Illinois announces sufficient funding to begin D-1 hockey in 2016-2017 season.  The Great Lakes Invitational hockey tournament announces that the fourth team in the holiday tournament will be from Michigan "for the forseeable future."  The Mariucci Classic makes a similar announcement, noting that at least one Minnesota WCHA school will be a participant each year.

2017-2018 - Illinois officially joins BTHC.  BTHC goes to 21 game season--with three games against every conference opponent.  Due to the unbalanced schedule, weeknight games become a regular occurrence.  CCHA and WCHA schedules are also reduced.  Conference games for all three leagues do not begin until late November.

2020 - Northern Michigan requests membership into WCHA, publicly stating that the program "cannot continue" in to survive while in the low-exposure CCHA unless Michigan and Michigan State abide by their agreement in principle to make regular visits to Marquette--after the Spartans and Wolverines decline to visit in for the third consecutive season.  Ferris State, while enjoying continued success as a post-BTHC CCHA power, nevertheless states that it needs its scheduling agreements with Michigan and Michigan State to continue indefinitely, as opposed to each school's proposal for 2 out of every three games to be played in East Lansing or Ann Arbor.  Proposals for 2-1-1 series (with one game at Ferris State and one in Grand Rapids) are also rejected.   Wisconsin plays its first game in decades against Division III programs, as several WCHA and CCHA schools boycott the the Badgers in response to Wisconsin's refusal to play home and home series.

December 2020 - The University of Michigan Board of Regents approve a feasibility study into options for replacing Yost Ice Arena.  In a published statement, the Athletic Department notes, with four Big Ten schools playing in dual-purpose arenas, Michigan has fallen to the bottom of the Big Ten in hockey per-game attendance (just ahead of Penn State), and the lack of luxury suites has made the hockey program the lowest revenue producer among Big Ten schools.    Even in a crystal ball-type article, going more than ten years out is simply too speculative to be worthwhile.  However, much of the above is very forseeable, even if the manner in which we get there is different than how it's set out here.  We know that Indiana wants to build a new arena, and Illinois wants to do so or refurbish its existing facility.  We know that Paul Kelley of College Hockey Inc. (a remarkably proactive endeavor by the college hockey world) has already spoken to Indiana and Illinois about starting programs, and multiple articles tied to him have mentioned the Hoosiers by name.

We also know that the difficulties discussed in the year 2020 follow a pattern already seen in college football and basketball.  At late as the 1990's, virtually any BCS football school would play a home and home with comparable program (think Michigan-UCLA/Colorado/Washington/Oregon/Syracuse/Boston College, etc.).  Over time, the home-and-home because a two-for-one, then no guaranteed return date was given at all in many instances (yes, I understand that things may be moving back--slightly--but that another story.  As athletic budgets remain tight, it's easy to see BTHC schools become more desperate to find revenue anywhere they can get it...and becoming stingier with hockey road games is an easy place to pick out if you're a non-hockey AD.  And we have already seen Wisconsin play home-and-home series with Northern Michigan, where Northern's "home" game was moved to Green Bay, Wisconsin.

There are lot of other variables that I have not even touched upon.  Now that Canadian schools can join the NCAA if they jump through enough hoops, could the CCHA and WCHA have Canadian members in ten years?  What about a separate all-Canada conference?  Could there be more schools looking to start a program that no one is talking about?  What about Hockey East going ahead with its own TV network (OK, maybe not).  The point is that there is a lot that can, and will, happen, and the ride should be interesting to say the least.

Lastly, the crystal ball offers one glimmer of hope.  Note that there is one thing missing from the entire ten year summary.  The official folding of a single Division 1 hockey program.  Hope springs eternal indeed.