After a couple of days of wrangling with my point and shoot Cannon, I finally have some of the photos I took from the BGSU game uploaded onto my computer. So, I figured I'd share a couple with you. Mind you they're not the professional quality pix you'd expect from someone with an SLR and a field pass (I'm working on it), but I think they're pretty cool. Bonus points for anyone who can guess what section I'm in. Enjoy, I'll have this weeks "On the Defensive" up soon. You're welcome to share any of the photos below, just shoot me a link if you do.

I figured I'd lead with something strong, so here's a photo of Vincent Smith's second touchdown run. There's a lot going on in this photo. You can see that Smith just schucked a tackle and with Junior Hemingway's block could pretty much Moonwalk into the endzone. On the bottom left, you can see Michael Shaw clutching his right leg after getting leg whipped by Smith's would be tackler. 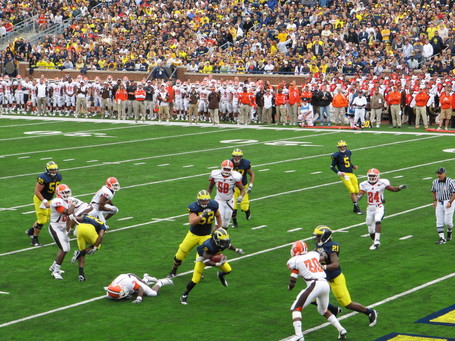 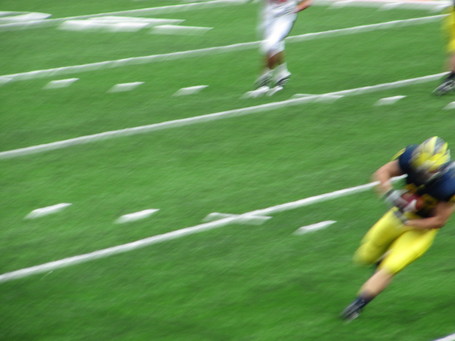 Just so we're clear, unless you're at field level and he's running directly at you, Denard Robinson is impossible to photograph from a distance. Hence, no photos of Denard. But when the Second Half started I got a great vantage point to watch Devin Gardner take some snaps. I took a couple of photo's of Kelvin Grady's touchdown run, but the defensive backs obscured him enough that it wasn't worth posting them. I thought this was the most interesting of the group because it shows the offensive line go into its blocks and Patrick Omameh release upfield. 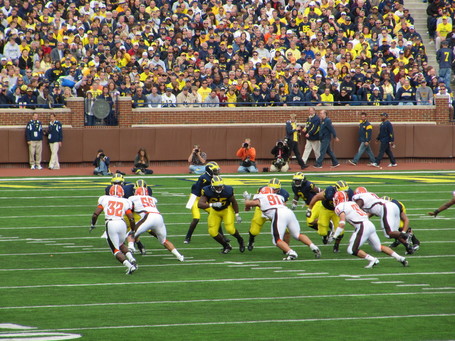 Shield your eyes after the jump.

I warned you to shield your eyes. Just so we're clear, that's what they use to cover Ohio when it rains. 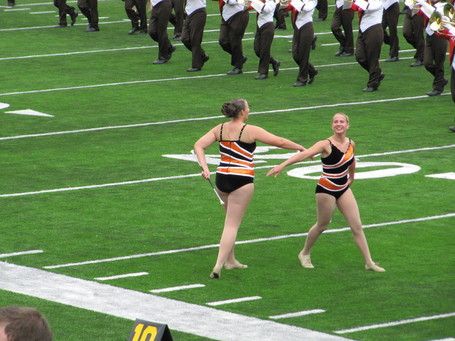 Moving back to football, another great thing about the second quarter was that it let me take a photo of Tate Forcier's first snap of the year, head on. 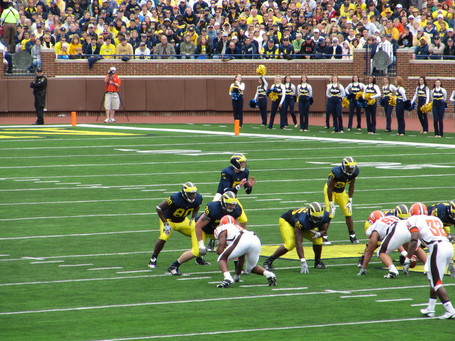 Watching Tate operate was a lot of fun. It also meant that we got to watch his downfield work pretty closely. One of the benefits was snapping this, albeit blurry photo of the aftermath of the scramble and heave pass to Roy Roundtree. Doesn't look like it was comfortable, does it? 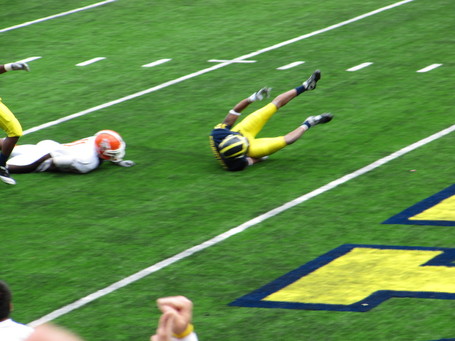 Some more of the zone read. You can see Tate making the exchange with Shaw as an unencumbered David Molk moves toward the middle linebacker. You can also see Taylor Lewan mounting the poor schumck assigned to rush the passer on his side. 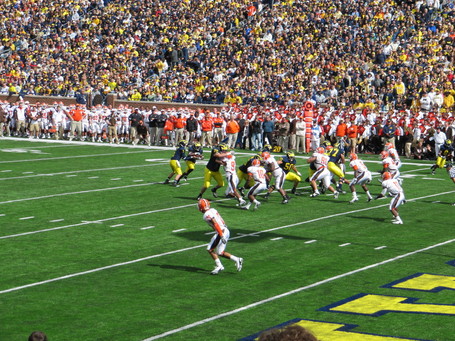 This next one is a split second after Shaw found his way into the endzone. Again, you can see Junior Hemingway with another good block. 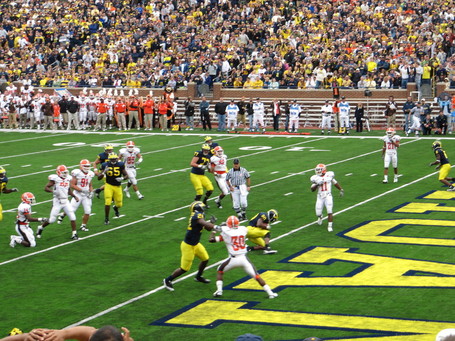 It might have been cloudy out, and the sun only shone in that off and on way kind of like throwing a thin white towel over a lamp, but every so often it cleared enough for a shot like this. 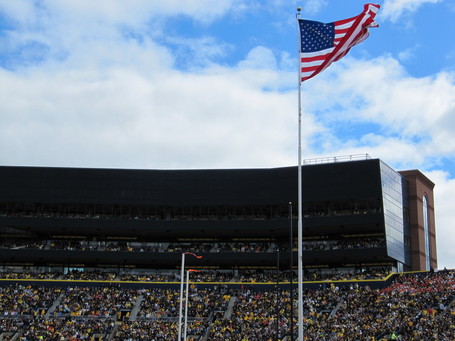