Share All sharing options for: Hail to the Victors! Michigan bests Connecticut 30-10 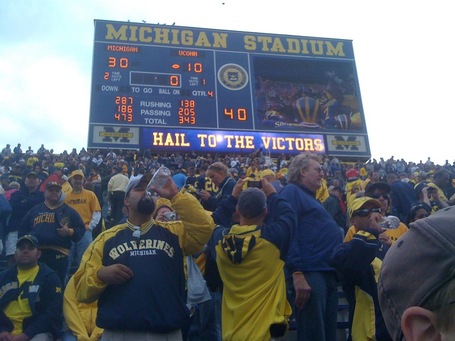 And so following a three and out that was the best kind of medicine for a Maize and Blue soul, a beleaguered, battered, and kicked-when-down Michigan program limped out to its own four yardline, 96 yards away from a goal that for two seasons has largely eluded the Wolverines.  You could almost sense the crowd collectively thinking "again?" when Connecticut downed that punt on the four.  To say that we were anxious would be an understatement.   After all, Michigan faced a "more talented" squad on the other side of the field, and yet somehow, someway, yesterday was different.  The Wolverines took the opening drive and hammered it down the field with an emphasis that would've made all of the Michigan legends from yesteryear grin from ear to ear.  The new all-time record crowd of 113,090 sat with jaws agape as Denard Robinson did things that, until now, we've only watched opposing quarterbacks do to our defenses.  He tore Connecticut apart, and he did it with his arm AND his legs.  Eat your heart out haters... Rodriguez's offense, the much maligned, much criticized offense, came out of its cocoon today and for 60 minutes was the death butterfly that Brian had alluded to nearly 3 years ago.  The Michigan offense churned out long , time consuming, defense exhausting, gorgeous drives that, while out of the spread formation, harkened back to what many define as Meeeeeeeechigan football.

The predictable, amusing, and never-ending routine that constantly faces Michigan fans will be no different this week: opponents will now switch stances as always.  After months and months of countless people predicting a certain UConn win, I cannot wait to hear them tell us that it was "only UConn" and that "a real defense won't miss tackles" and that "you can't ride Denard like that in the Big 10".  They'll pick and choose, masking their fear with snippets and jibes as they always do.  "Who cares" is the appropriate reply.  UConn wasn't Youngstown State, they weren't Marshall, they weren't Western Michigan, and they weren't UNLV.  It is indeed only one game, but this was a big first step.  Everyone predicted the Wolverines to be severely tested in their opener, many preseason breakdowns ranked Connecticut above this Michigan squad, nearly all the talking heads pointed to this game as an opportunity for an experienced Huskie squad to announce its 2010 candidacy as a Big East front-runner.  Those same people will now downplay all of that.  Which is fine, we're used to it, and quite frankly, we don't give a toss what they have to say.  Notre Dame looms, but for today, Michigan football has provided us a glimpse of what we've waited two years to seem, and for today, we will relish it.  Hail to the Victors valiant, hail to the conquering heroes!

Breakdowns after the jump...

On to the particulars: 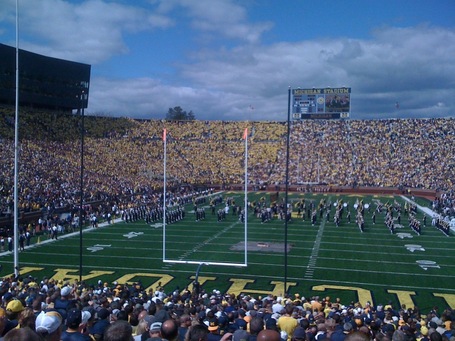