Spotlight on the Notre Dame Running Game: What to Look For Against Michigan

Share All sharing options for: Spotlight on the Notre Dame Running Game: What to Look For Against Michigan

One of the most obvious make or break issues going into the Notre Dame Michigan game is whether Michigan's rush defense can stand up to Notre Dame's talented stable of backs and offensive line. The Irish gashed Purdue's front seven for 153 yards last Saturday. In doing so they made a defense that many people considered to be one of the better front sevens in the league look awful.

Notre Dame's running game is somewhat of a revelation. Imagine, Weis running the ball to set up the pass rather than the opposite. Brian Kelly's offense was very, very effective on the ground and I'm certain the Irish will look to assert their will with their running backs early in the game. In looking at the film, the Irish use a lot of pulls from the guard position, so it's something that Michigan should be able to game plan for. I took a look at three big gainers for the Irish last Saturday and broke down what went right and what went wrong on both sides of the line. 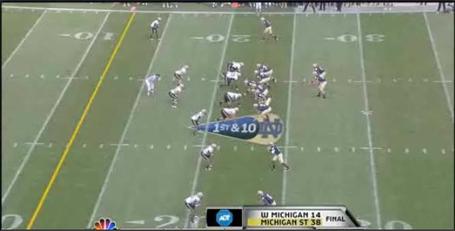 Here the Irish line up in their base 3 wide set. Purdue shows five near the line with a linebacker covering Kyle Rudolph toward the bottom of the line. 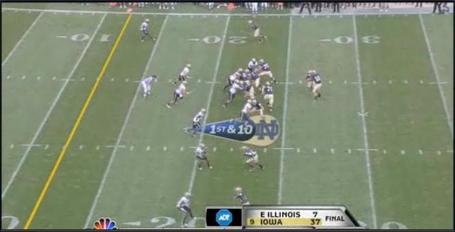 At the snap, Rudolph engages the DE end forcing him outside to prevent backside pursuit as the Tackle pulls toward the right side. The result is a giantic hole on the left side of the line which brings Purdue's MLB down to fill the hole. The thing the LB's miss is that there are now four Notre Dame Linemen on three Purdue linemen with a fifth lineman on his way. Allen takes the handoff and prepares to follow his big ugly toward the now overloaded right side. 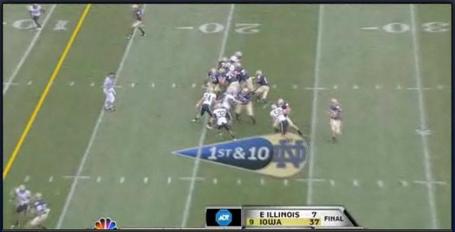 With one linebacker filling the gap opened by the pulling guard, the remaining LB sees a small window between the left side guard and the center, and tries to shoot the gap between them to get to Allen. The fact that he started the play 8 yards off the line is apparently lost on him as he doesn't have the closing speed to get there. Meanwhile, Allen is following his Left Tackle through the giant hole that is now emerging as the Right Tackle forces the DE outside and the Right Guard and Left Tackle smush the now helpless DT. It's an angle and numbers game and Notre Dame wins it cleanly. Too many people for the Defensive Line to handle and bad angles by the DEs open the play up for Allen to burst right through. 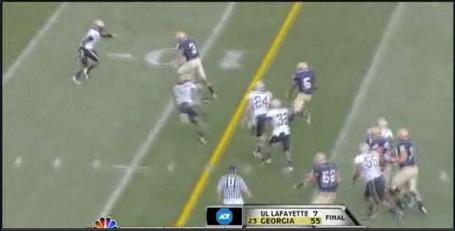 And it turns into six points. The pulling guards and tackles kind of a theme throughout the game.

Let's take a look at a fourth quarter run with the game still relatively close. 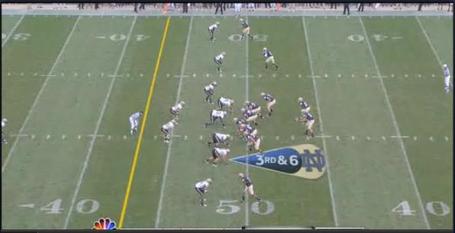 Moving to a little later in the game the Irish line up simliarly, this time shifting Rudolph and the extra receiver to the right side of the line with another standard three receiver set. Again, note that the LB is over Rudolph and the remaining linebackers are over the gaps around the top side DT. 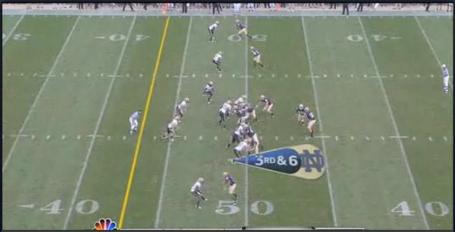 On the snap, the left side of the line engages with the center and left guard doubling the NT, and the LT in a single block and the right side guard and tackle push up field. You can already see Rudolph preparing to cut the DE. This effectively takes the top side LB out of the play because he has outside responsibility for this play. 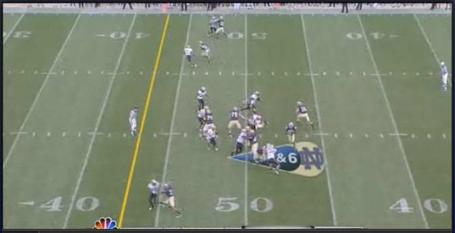 The play is designed to go to the left and Allen follows the double team as the right tackle seemingly stays in space with nowhere to go. I have to think he blew something there or his responsibility was sealing the MLB. Regardless, the Guard has blown the DT back into the path of the MLB and he's effectively out of the play. This leaves the backside DE who is slowed by Rudolph's cut, and the bottom LB to stop Allen. That's not good. 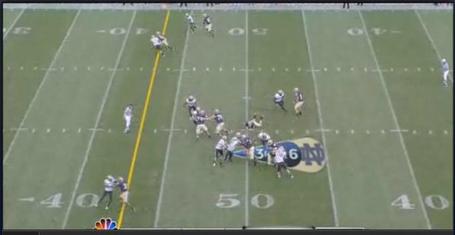 The back side DE dives and whiffs at Allen's feet. Looking ahead, Allen's got a barn sized hole to run through with a Linebacker that's effective allowed himself to be blocked by his own guy. There's no chance he's making this play. 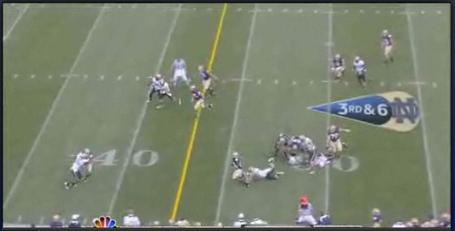 He doesn't. And with three defenders and three blockers, Allen breaks into the open. Well executed but poorly defended.

One other pattern I noticed was that the Irish took advantage of the deep sets by Purdue's linebackers. 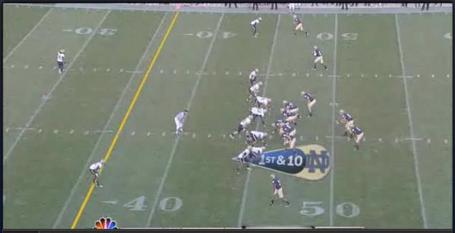 This is the same set as above, but with Allen on the left side of the QB. Purdue, apparently compensated for 3 quarters of getting overloaded at the line, has a LB and corner over Rudolph and a LB over the center. There's also the final LB preping a blitz to the left side of the offensive line. 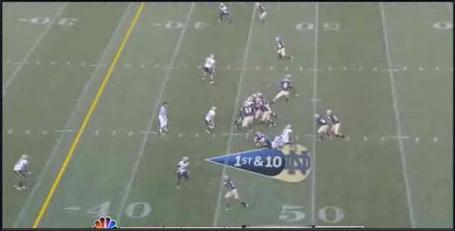 On the snap the right side of the line sandwiches the defenders at the line and Rudolph forces the blitzing LB out wide. You'll note giantic holes on both sides of the line as the Left Tackle forces both the DE and the linebacker wide. 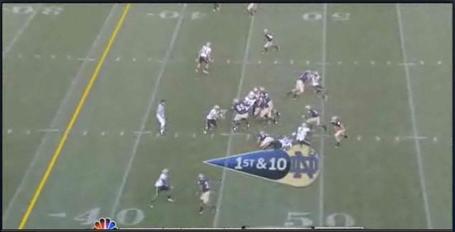 At the hand off, the remaining Linebacker is screwed. He's got a fifty fifty chance of getting this right. He guesses right  because Rameus always turns right at the bottom of the hour. 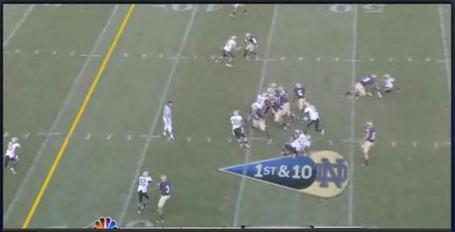 No he doesn't. Allen goes right as the line has just overwhelmed the two defenders on the right side and tap dances through the hole. 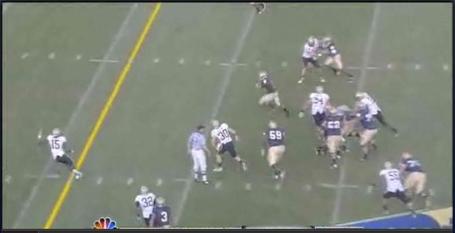 Bye bye.Notre Dame did a great job of overloading the attack side of their running plays, putting four guys on three Purdue defenders. I think it's safe to say that Notre Dame will do it again on Saturday. The key will be linebacker play. As you can tell from the footage above, Purdue's linebackers screwed the pooch on Saturday. We'll have to see how Michigan lines up to counter this.