Share All sharing options for: My Top 5 Sports Plays

So I cruise over to Black Heart Gold Pants this morning and see this post, detailing Jacobi's top 5 plays, and thought it looked fun.  Plus it's not plagiarism if you link to it AMIRITE?  Like Jacobi, upon seeing Lynch's run on Saturday I turned to my friends and said "that's the best play I've seen in the NFL in a long time."  Upon reflection, it might be the best play I've seen in the NFL live since maybe something Barry Sanders did?  I don't even know.  The Catch?  I didn't really see that one live...

Jacobi stipulates these rules, which will be followed here:

1) Single plays only. If we're allowing edited highlight reels this list is total garbage, and if we're allowing entire swaths of games then nothing on Earth touches Plano East vs. John Tyler in 1994. The entire fourth quarter and overtime of Boise State-Oklahoma would be way, way up there too. I'm more interested in singular displays of athletic brilliance when we discuss highlights.

2) Real games and situations of plausibility. Otherwise this list would be nothing for 250-yard hole-in-ones and those videos where bros shoot baskets from moving Ferris Wheels or the top levels of parking garages or whatever. Or this one kid beating the buzzer with a blind backwards shot. Also, if it's a team sport, can you replicate the play on demand with no defense present? Otherwise, again, just luck.

3) The stage, team, and competition matter, but primarily as confounders rather than determinants. Look, if I were indulging my Iowa homer tendencies, Rob Houghtlin's game-winner against Michigan in the #1-vs.-#2 back in '85 would take up every spot on this list. I can barely get through the entire highlight without getting a little teary, especially thinking about what it meant. But at the end of the day, it was just a field goal from 29 yards. Same goes for Daniel Murray hitting from 31 yards against No. 3 PSU and all that entailed. Great opponents are a big deal, but short field goals are short field goals. The point is this: can you watch the play and be amazed without knowing anything about what made the play important to begin with? The play and game clock must speak for themselves.

I actually think he kind of breaks his own rule with his #2 selection, Tiger Woods chip-in at the 2005 masters, because I think that's mostly luck and not likely to be replicated on command, but it's an awesome highlight anyways so whatevs.  After the jump, my top-5 highlights.

Michael Phelps' drive for 8 gold medals in 2008 was cool even for somewhat jaded sports fans who think that the Olympics is slightly too saccharine to be taken seriously.  The lead up to this was awesome though, with Cavic and Phelps staring each other down on the blocks prior to the race: 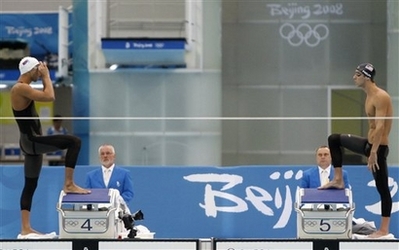 The 100m Fly was likely to be Phelps' biggest challenge to 8 gold medals, and the finish, where he out-touched Cavic by quite literally a fingernail, was not only a singular moment in sports, but also a moment that got a nation that really really doesn't care about swimming to care about swimming for a minute.  I know the bar I was in when he finished went nuclear when they saw "1: Phelps."  I was in a similar bar here in Boston when the Red Sox won the 2007 World Series, and it wasn't as loud and didn't involve so many strangers high-fiving and even hugging.

Yes, I know we're all subjected to this every March and by now we've got it crammed down our throats to the point of sickness, but you can't deny the awesomeness of this play.  It's so awesome that Tyrone Hill (the "not Grant Hill" Dukie) bursts into tears.  Crying, they say, is the human body's way of getting rid of excess emotion and a signal that a human can't handle whatever situation they're in and shuts down for a second.  That's how awesome that shot was.  It completely overloaded Tyrone Hill's circuits.

3:  Marshawn Lynch Runs Over, Through, Around, Etc. the Saint's Defense

This doesn't need much historical context as it happened two days ago.  But still, this run is awesome.

2:  Michael Jordan Buries the Game Winner against Utah in the 1998 Finals

This should have been the end of Michael Jordan's career.  Keep in mind that he was getting older even during the 1998 season.  He introduced himself to the world as the kid from North Carolina sinking that corner jumper, and he should have gone out by sinking this game winner over Utah.  Those should have been the bookends.  As we all know, they weren't, but his time with the Wizards wasn't really Michael Jordan.  He played more of the 3-4 position than his usual shooting guard.  It was almost a different player.

What makes this clip worthy of #2 was the absolute lack of doubt that Jordan was going to hit it in that situation.  I remember watching this play live and thinking "there's no way he misses this."  Is there a single other player that you would say that about given the stakes (to win the championship)?  And Jordan knew it too.  He was playing a different game than those around him.  This play almost breaks rule #3, but if Jacobi can have Tiger hitting a lucky chip, I can have this one.

The announcer makes this play better than it actually is.  I know the stakes aren't that high on this one, but as a stand-alone "wow I can't believe that just happened" it's hard to go wrong with that Cal guy stomping the trombone player in the endzone.

So what are your top plays?  Any I'm missing?  I really wanted to put Hank Aaron's record breaking home run, but (rule 3) a home run is still just a home run.  Not really jaw dropping until you figure in the context. I also realize that I have two HUGELY cliche picks here in Duke and Cal.  What would you replace them with?