Share All sharing options for: Snapshots: Freshmen and Freshman Mistakes

I was hoping to do a breakdown of where Michigan stands with defensive recruiting at this point, but without a defensive coordinator in place, who knows?  Instead, here's a different type of breakdown - the kind that allowed Mississippi State to score a rushing touchdown against Michigan in the Gator Bowl.

The setup: Mississippi State leads Michigan by a score of 38-14 with :14 remaining in the third quarter.  The Bulldogs have a 1st & Goal from Michigan's 7-yard line. 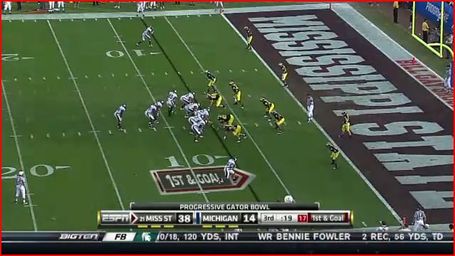 Prior to the snap, the Bulldogs are in the Pistol formation with a fullback to the left of quarterback Chris Relf.  MSU sends an H-back in motion to the playside.  Michigan is in a 3-3-5 look with bandit Jordan Kovacs playing back in what looks like a Cover 4.  Free safety Terrence Talbott is lined up to the playside. Defensive end Craig Roh is in a 4i alignment (inside shoulder of playside tackle) and nose tackle Mike Martin has bumped down to a weakside 2-tech (head up on the guard).  As you can see, there's an obviously weak bubble over the center and playside guard, so . . . 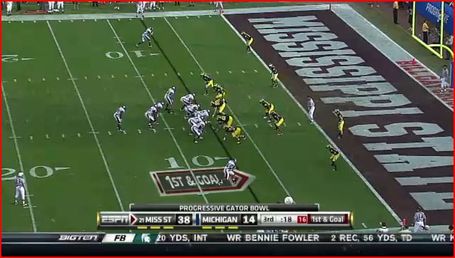 . . . Roh bumps down to a 2-tech over the playside guard, and outside linebacker J.B. Fitzgerald comes down to the line of scrimmage, essentially playing a standup defensive end.  The 3-3-5 has morphed into a 4-2-5, but with a 250-pound Roh playing defensive tackle.  That's probably not good. 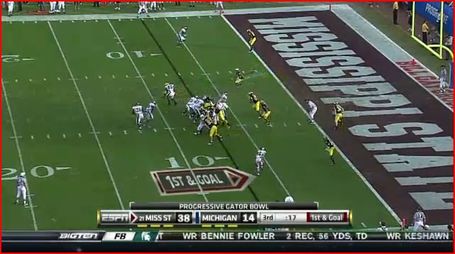 Relf opens up and hands to the dive back.  This action reveals Talbott rolling up to support the run and Kovacs dropping back to cover his deep third in what turns out to be a Cover 3.  Roh has slanted into the playside A-gap (between the center and guard) and gets collapsed away from the play by the guard.  Meanwhile, linebacker-turned-defensive end Fitzgerald takes on a double-team from the fullback and the pulling backside guard; in addition, he fails to reroute the playside tackle, who gets a free release on a linebacker.  As might be expected, Fitzgerald is doomed.

You can see that the playside tackle, once he gets his free release, glances at middle linebacker Kenny Demens.  But Demens makes a bad choice and books it for the outside, thinking running back Vick Ballard might make a beeline for the corner.  This is called "overscraping."  As you might guess, outside contain is rarely/never a middle linebacker's job.  The tackle dismisses Demens and sets his eyes on backside outside linebacker Jonas Mouton.  Gap-sound defense by Demens would force Ballard into the present-but-miniscule arms of an unblocked Talbott.  Instead, both Demens and Talbott grasp for air. 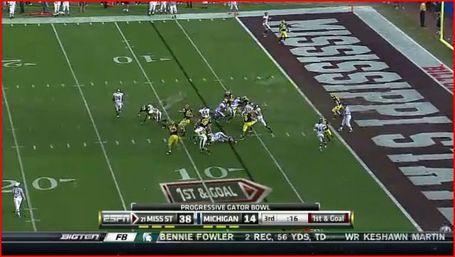 Rather than keeping his shoulders square and/or trying to fight across the tackle's face, Mouton allows himself to get turned by the playside tackle.  This creates a cutback lane for Ballard.  Demens has run himself out of the play.  Talbott is walled off by the double-team on Fitzgerald.  Kovacs is still standing in the endzone, despite the fact that Ballard is now beyond the line of scrimmage.  Backside corner Courtney Avery has done a good job of hustling to the play and beating the block to the inside. 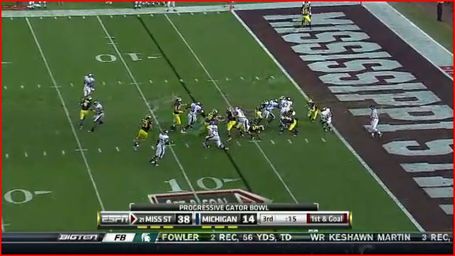 Avery hits Ballard with good technique but not much ass behind him, a difference of 41 lbs.  The guy who's supposed to be blocking Avery has quickly purchased a ticket and become a spectator.  He would rather eat popcorn than block Kovacs, who pokes himself out of the endzone. 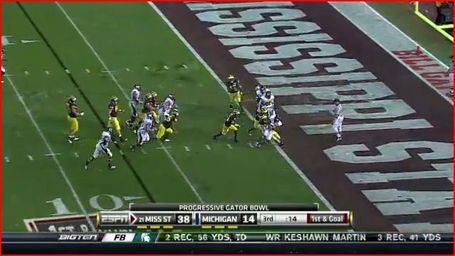 Kovacs makes a valiant effort to stop Ballard short of the goal line, but Ballard has momentum and a few pounds on the former walk-on.  Touchdown.  44-14.

MagnusThunder is a high school football coach and author of Touch the Banner, a Michigan football blog.