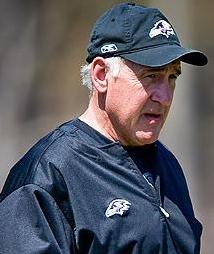 Brady Hoke has hired Baltimore Ravens Defensive Coordinator Greg Mattison to the same position at the University of Michigan according to NFL Insider Jason La Canfora. This was confirmed by John Harbaugh, the current head coach of the Baltimore Ravens

"We’re excited for our defense and for Chuck, and we’re happy for Greg Mattison," coach John Harbaugh said. "I will talk more about it tomorrow when we formally announced Chuck as our new coordinator in a press conference.

Mattison replaced Rex Ryan as Defensive Coordinator for the Ravens when Ryan moved to coach the Jets. He coached linebackers for the Ravens prior to that.

Plenty more analysis to come, but my extremely brief analysis of the situation is basically "sweeeet."