There is Hoke For Michigan Football's 2011 Recruiting Class

Share All sharing options for: There is Hoke For Michigan Football's 2011 Recruiting Class

Yay, more bad puns on our Coach's name! And no, I'm not stopping.

As our buddy TuffLynx has been chronicling in the Fanposts section, Michigan's recruiting news has been coming in fast and furious ever since Hoke took the job. Michigan's current commitment list stands at 16 players, up considerably from the 10-11 (depending on how you considered certain players who are no longer committed to Michigan) he inheritted the first week in January. Since January 20th, Hoke has secured six new verbal commitments to Michigan and every one of them has been for a position of need. Hoke is in full on NBA JAM mode. 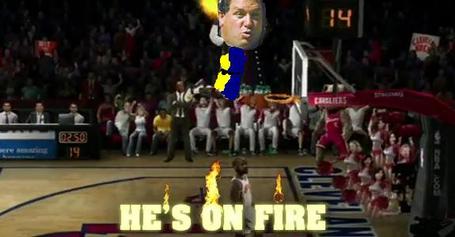 So lets take a look at who Hoke's brought on board over the last few days:

Tamani Carter - CB - (3 star) - (Committed 1/20/11) - Carter was Hoke's first commitment at Michigan's head man. Carter wasoriginally a Minnesota commit who saw the light once Brewster was shown the door. At best a tenuous Gopher commit, Carter re-opened his recruitment. He's got a decent, but not stellar, offer sheet with Iowa, Stanford, and Arizona being the non-Michigan headliners. At roughly 6 feet 175, Carter looks like he'll need a year to redshirt and bulk up , but who knows. I've heard rumors he's slated for safety, but he seems like he's got decent cover skills and the ability to turn and run with a receiver. Needs to learn how to smile for photographs. Denard will teach him.

Matt Wile - K - (2 star) - (Committed 1/22/11) - Oh thank God. A kicker. Michigan's had all kinds of issues kicking the ball over the last three years (file under "duh"). So recruiting a US Army All American to kick is a good start. Look for Wile to compete, if not immediately take over, the kicking duties at Michigan. FWIW, he reportedly held a Nebraska offer.

Ramon Taylor - DB/Ath - (4 star/3 star) - (Committed 1/22/11) - The first four star player in Hoke's recruiting portion of the class. Taylor's arguably one of, if not the best, pure athlete in this class. He's rated as a DB on Scout and Rivals'#14 athlete in the 2011 class, and one of Michigan's highest rated prospects. At 5'10, 170 Taylor's a little undersized but appears to be a stellar ball player with great ball skills. I've heard rumors that he's slated for safety and that his skill set translates better there, but given his athleticism I think he could stick at CB if given a chance. Impressive offer sheet with most of the top Big Ten teams courting him (though no OSU offer).

Keith Heitzman - DE - (3 Star) - (Committed 1/22/11) - Hoke's first defensive line commit. Heitzman is a currently undersized Strongside DE prospect who's going to need some time to grow into his frame. At 6'3" 237, he's not the largest kid on the block and is definitely going to need a redshirt year to bulk up. Originally a Vanderbilt commit, it's fairly likely he would've seen the field on Day One, but with some DE depth at Michigan hopefully he'll be able to redshirt. On the other hand, he also rates as a 3 star tight end, a position where Michigan is sorely in need of some help while moving to a pro set. At first glance, he's definitely a depth commit, but could see plenty of time in the coming years.

Russell Bellomy - QB - (3 star) - (Committed 1/25/11) - With Tate Forcier on his way somewhere else, Michigan DESPERATELY needed another quarterback on the roster. Enter Russell Bellomy, the latest player to be snake oiled away from Purdue by Michigan. Hopefully he turns out to be as good as Roy Roundtree turned out to be. Bellomy's a 6'3" pocket passer with decent wheels. His arm strength is probably comparable to Tate Forciers, but his high school competition isn't. Bellomy's was much, much harder. Bellomy played in the highest level of Texas high school football (5A) and threw for almost 1,600 yards (15/4) and ran for 800ish (9 TD). He's not a rocket armed statute (yay!), but is a crafty guy on the run and has nice touch on the ball. Immediately the third stringer (obv), but could see plenty of time depending on injuries and potential (sigh... please no) transfers. Had an offer sheet from programs good at developing under the radar QBs (MSU, Purdue, Boise State). A great get for the staff not just at this point in the game, but in general.

Antonio Poole - LB - (3 star/4 star) - (Committed 1/25/11) - Poole is a shortish linebacker (6'1") that plays much, much bigger than his measureables. There's the usual effusivepraise from the recruiting sites combined with the caveat "I wish he was taller." Screw that noise. Poole is a ball player and he will knock you the eff out (MGo Link, Malware issues). Poole got wind of the Greg Mattison connection to professional linebackers of some renown and said sign me up. The holder of a decent offer sheet, he could potentially see some playing time next year if Michigan's plethora of LB recruits from the past two classes can't fill the gaping hole that has been Michigan linebacker play (excluding Kenny Demens) over the last three years. There's a lot of excitement about his commitment from coaches and people who follow this closely, so my general excitement level here is pretty high.

Michigan's still got between 4 and 5 slots to fill, and I'm guessing it's going to be filled by at least one DT, another LB, and some offensive linemen (though we'll probably only get one). Hoke's going all over the place right now and don't be surprised if he snake oils another quality defensive recruit out from under someone else and adds some quality undecided players. At this point I don't think Michigan's going to miraculously sign any 5 star athletes that are undecided, but that doesn't mean you won't see some additional high 3 stars and a 4 star or two come on board.

Regardless of which, Hoke's doing one hell of a job recruiting in his first two weeks as Michigan's head man.