...because somebody had to do this.

Ok, so EDSBS via the uniwatchblog put up the SEC family portrait analyzed, which is - as most things associated with Orson - genius.  It also begged the Big Ten portrait to be given a similar treatment.  These were, apparently, unearthed by a uniwatch reader, and the story is actually quite interesting and deserving of your eyeballs.  These were done in 1969, so as Orson points out, THASS RACIST actually might apply here.  Your Big Ten Family Portrait: 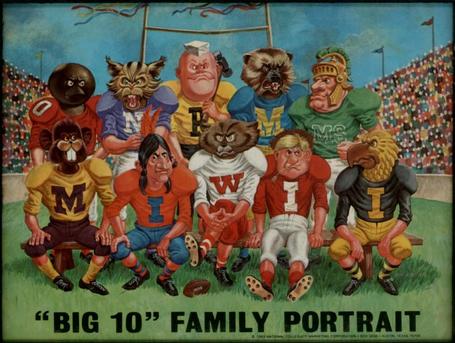 Ohio State:  Decidedly worried about that radioactive goo that he rolled in immediately prior to this photograph, he angrily searches for a mirror because, dude, my face just doesn't feel right.  Note that the rest of his body appears unaffected.

Northwestern:  He hungrily eyes that Gopher, likely he'll just toy with him before bringing his still-alive body to Michigan State for disposal, because house cats just do that shit sometimes.

Michigan:  Desperately he looks around, hoping nobody will find out that he actually doesn't have a clue what a Wolverine looks like.  Just look disdainful, faux Wolverine, you're probably smarter than all these guys anyways.  Hope Northwestern doesn't notice, and you're probably in the clear.

Michigan State:  Looking at that group of women/nerds just off camera.  In 1969 nobody got upset when you beat them down a little bit.  He'll be back on the field come Saturday.

Minnesota:  Nervously eying that wildcat right behind him, ready to run away the moment that damn cat makes his move.

Illinois:  Looks accusingly at you, reader, wondering where his land went and why he has to move west.  There was some talk, and some firewater, and well...the rest is kind of a blur...

Wisconsin:  Note the posture of the Badger.  He's seen the fashion on display here, and can't wait for Clint and Stacy to get ahold of some of your wardrobes 50 years later.

Indiana:  Anxiously awaits basketball season.  You assholes are so in trouble then.  META:  Did the artist just give up here?  Or is this genuinely a portrait of what folks from Indiana looked like in 1969?

Iowa:  See how he's staring at Northwestern?  The Wildcats were apparently beating vastly superior Iowa teams even then...

Penn State:  That's JoePa behind the camera.  Fun fact:  Paterno explored a career in photography before committing to coach football, and considers this portrait amongst his finest work.

There you have it.  Anything I missed?  Add it in the comments.