College Basketball on an Aircraft Carrier? Man Up, Already! Play Some Place More Dangerous and/or Interesting!

Share All sharing options for: College Basketball on an Aircraft Carrier? Man Up, Already! Play Some Place More Dangerous and/or Interesting! 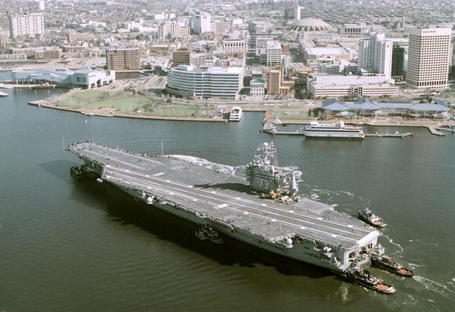 UNC's going to play Michigan State on an Aircraft Carrier? Sweet! How did we not think of this sooner!?

If there's one thing the NCAA is good at, it's making money. Specifically, making money off of gimmicks that use their student athletes like the disposable tissues they are. Hockey game in a football stadium? Check. Football Game in a baseball stadium that's potentially life threatening to the players? Check. Expand the NCAA Basketball tournament to 327 teams? We're working on it!

Now, in a moment of sheer marketing clarity, the NCAA has devised a new and wonderful way to make money and seem patriotic. Let's have a basketball game on an aircraft carrier. How 'bout North Carolina and Michigan State? Yeah. That sounds great. But we can't really charge admission, can we? No, but we'll jack up the advertising rates and stick the screws to CBS/ESPN/NBC/ABC/UPN/WB/whoever to pay through the nose to broadcast it. muahahahahahahaha! MONEY! I can't wait to see one of the players hustle for a loose ball, go over the broadcast desk, and the edge of the aircraft carrier (at 0:24).

Side note: Anything that makes me think of a coked out pre-television Charlie Sheen makes me happy. "Waiter. I'll have the filet mignon, a bottle of Bordeaux 1963, and a plate of cocaine the size of the Astrodome. Thanks." "And for you Miss Fleiss?"

But this got me thinking. Aren't there better, more dangerous ways to exploit student athletes for ratings and, more importantly, money? Of course there are. So in order to help speed along the process and get to the really, really good stuff, we thought we'd provide the NCAA with some new ideas that will not only maximize the danger to the students participating, but increase marketshare and revenues! All at once! Here are a couple of our ideas (copyrighted, of course) that the NCAA can lease or purchase for an exorbitant sum:

The Iron Bowl on 38th Parallel (brought to you by Daewood)

Can't you see it? Finally, after years of strife, war and bitter reprisals Alabama and Auburn can really teach those Koreans how to hate. I can see the pitch now:

Face it, son, the war for Alabama has been going on longer than either of you have been countries. What the hell do you know about hate? We were fighting each other while we were fighting those damn Yankees in the war of Northern Aggression. Lemeaskusump'n, You ever stabbed someone in a bar because they talked shit about Bear Bryant? Neither have we. We shot 'em.

I propose we play the game inside the 38th Parallel's demilitarized zone. Shouldn't be hard to implement, as the ground has been razed flat by incessant bombings, bulldozers and the occasional landmine explosion. The field must run North to South, giving each Korean country a natural team to root for. Granted, someone's goingto get stuck with South Koreaas their cheering section, but thems the breaks. With all the mines planted in unknown locations, the occasional artillery round been launched onto the playing field, and the sporadic sound of gunfire, it's made for TV. And, honestly, the field conditions are probably the same in Tuscaloosa and Auburn anyway.

Not only will this increase college football's exposure in Asia's 5th and 31st largest economies, but it will also be an eye opener for the students. Coming from Auburn and Tuscaloosa, Pyongyang will look like King Midas' temple. Flush toilets. Wildlife controls. Sea Turtles not falling from the sky. I wouldn't be surprised if some of them stayed.

The winners dine with the People's Glorious Leader Kim Jong Il. The losers are shot. But that's the way Bear would've wanted it. Only the winner eats.

much more after the jump...

College Basketball on an Operational Aircraft Carrier, at Sea (brought to you by the NAVY and Dramamine)

Oh yay. A college game on an aircraft carrier parked in dry dock, in San Diego. Woo. Give me a break. If you're going to do this right add an element of real danger. I say we have the game played on the flight deck while the carrier is rounding Cape Horn in South America. Try going up for a dunk when the basket's pitching at a 15 degree angle and the floor beneath you is shifting like a Jamiroqui video. The cameras will love following the jump shots, and players, that get blown into the sea by the jet wash of a launching FA-18.

Plus, we can do some great human interests pieces on the kids as they suffer through trying to sleep in a bunk designed by a 5'10" ensign, and the daily swabbing that's required of NAVY PERSONNEL!!! This has win written all over it.

Wisconsin v. Boston College Hockey in the Mekong Delta (brought to you by NBCSports)

Hockey's always looking to expand it's viewer base, so why not reallygo off the map and target a whole new viewer base? We've perfected ice saving technology to the point that we could have a rink on the sun if we wanted to, so why not give it a go. Besides, what's a few more fluorocarbons in a delicately balanced ecosystem? NBC will broadcast anything that gives them the chance to put the animatronic corpse of Bob Costas on screen. Yes, Bob, I'm sure there's a parallel to some Yankees game you went to as a kid.

Women's Gymnastics Finals in Tehran (brought to you by... who am I kidding... no one)

I'd watch this. Wouldn't you? I'm personally guaranteeing a 1.5 share. This would quadruple your viewership for the past... well... since college gymnastics was sanctioned. Watching them stick the landing while avoiding a stoning from the presidential guard will make for gripping television.

At least this gets it out of the States and makes room for real sports.

That's it for now. You're welcome NCAA. You can make our check payable to "CASH". If you've got better suggestions, or worse ones, leave 'em in the comments below.