The Plane has Crashed into the Mountain

Share All sharing options for: The Plane has Crashed into the Mountain 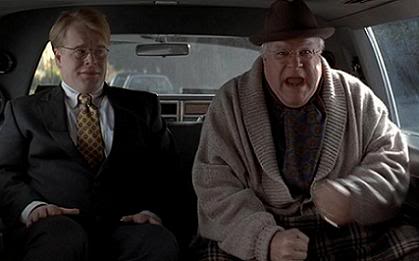 David Brandon held a press conference this afternoon to announce what we've all long suspected, that Rich Rodriguez has been relieved of his duties as Head Football Coach after a season long evaluation.  Yesterday was, apparently, the evaluation portion with this morning being the time that Brandon had designated for making his decision.  This was the normal portion of the press conference.  Shortly thereafter, the press conference went totally and completely to shit.  Jim Harbaugh does not appear to be an option, and Brandon is preparing to go on a nationwide coaching search.  On January 5th.  He mentioned that he has a lot of work ahead of him, which would be funny if it weren't so, so grim.

This, more than anything I've seen out of Rodriguez, shows a tremendous lack of understanding on the realities of this situation.  Previously, I had defended David Brandon and his plan, claiming that there was no way that he didn't have a plan-B for Harbaugh.  Brandon did indeed have a plan, but as it turns out the plan is as asinine as it is arrogant.  To think that Michigan will be able to get away with starting a national coaching search on January 5th while every other program is locking down recruits is arrogant.  To stick with a plan that probably would work fine if Brandon's job was making pizza's in asinine. As I sat in on Mgoblog's livechat, the question came up as to what the worst case scenario would be.  This is it. By not having a coach in place, Brandon has effectively put Michigan on probation by virtue of a recruiting class that will be flapping in the wind, as well as the possibility of current player transfers.  Even with Hoke, at least there was somebody to talk to these recruits.  Right now, there's nobody and it sounds like there won't be anybody for at least a week.  This weekend's recruiting visits have been delayed.

The primary issue I have is with Brandon, who told everyone that he had a plan and would not deviate from that plan, then revealed the plan as one that makes little sense when taken in the context of running a big-time football program.  I mean, it's one thing to get blindsided by extenuating circumstances, but Brandon has, by his own admission, had this plan in place for a long time despite its lunacy.  The plan has handcuffed the program, and put whoever is chosen as the next head coach in a very precarious position.  That person will have very little time to convince current players to stay, or recruits to come.  If Rodriguez was going to be fired today, Brandon needed to have a coach lined up in the next 24 hours.  Not have a nationwide coaching search that he hopes to wrap up by Wednesday of next week.  If the plan was always to have a nationwide coaching search, Rodriguez needed to be let go on Dec. 1 and the search needed to have started then.  It wasn't handled correctly, and Brandon has instead flown the plane directly into the mountain, and done so by following his deliberately thought out flight plan.

This site, as well as most of the internet and indeed the media as a whole has been very supportive and pleased with Brandon's efforts thus far as Athletic Director, but he deserves to be criticized for this fantastic lapse in judgment regarding the coaching situation.  The press conference was not without positives, however, with Brandon saying that Michigan has always paid coaches in the "middle of the pack" and that won't be enough going forward.  It does sound like whoever we get we're going to be willing to open the pocket book for.  There's your one ray of brief sunlight as you stare from the wreckage that is now the Michigan football program.

Maybe I'll feel differently tomorrow or something, or maybe Brandon's got some sort of ace up his sleeve, but all signs point to doom.  Plenty of speculation as to the next coach forthcoming, but that was a disaster of a press conference, and Michigan football now hangs on a precipice more precarious than Rodriguez had ever put us on.