Share All sharing options for: The Candidates: Gary Patterson

Yes, I know I crossed him off the list yesterday, but a combination of commenter's valid points and some radio comments from Patterson himself now make him a viable candidate, and probably the best non-Harbaugh name on the board barring some left-field candidate that we haven't heard about.  About that radio interview, when asked about the Michigan job, Patterson replied that Michigan was a great program, and that he would cross that bridge when he comes to it.  He also replied that he had not been contacted by Michigan.

So, the door has opened enough to do a little investigative work, no? 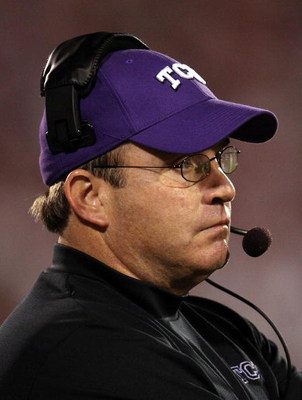 From:  Rozel, Kansas (SOUNDS LIKE ROTEL OMG HIRE HIM)

Gary's played football for Dodge City Community College before transferring to Kansas State.  He played both safety and linebacker before graduating Kansas State with a degree in Physical Education.  In 1982 he joined the staff at Kansas State as a grad assistant before moving on to Tennessee Tech to coach linebackers from 1983-1984.  While at Tennessee Tech he also earned a Masters Degree in Education Administration, FWIW.  Lloyd would be proud.

The next 5 years were spent at different schools all coaching either DB's or LB's.  In 1992 he coached at something called the "Oregon Lightning Bolts" which I guess is some sort of "Spring Football League" that had backing from a non-ESPN media outlet and died on the vine.  Anyways, his resume looks a lot like all coaches resumes, bouncing around until finally landing as the defensive coordinator at TCU.

Here is where things got interesting.  In his 10 years as head coach of the Horned Frogs, Patterson has compiled a record of 98-28 while going 6-4 in bowl games.  He has had six 10 win seasons, the latest of which came last year where he went 13-0 after beating Wisconsin in the Rose Bowl.  His teams have consistently been among the "BCS Busters" along with the likes of Boise State and Utah.  Patterson was named the 2009 AP Coach of the Year after leading his team to another undefeated regular season.  He remains the only non-BCS Conference coach to win this award.

Patterson's calling card throughout his tenure as head coach of TCU has been defense.  He played defense, coached defensive positions, and as a head coach has consistently churned out solid defenses.  In 2000, Gary took over the Head Coaching position with only the bowl game on the schedule, but FWIW his TCU defense was #1 in the country in total defense...here's a chart starting with his first full-time season:

I will have some of that.  Disregarding that 2004 outlier during which TCU went 5-6 and missed a bowl game for the only time in Patterson's career, his defenses have been not only consistently ranked in the top quarter of NCAA teams, but in the top 2.  Patterson's been the head coach for 10 full seasons, and his defenses have finished in the top 2 in the country for half of his tenure, including churning out the nation's top defense the past 3 years running.  Lack of competition caveats do exist, but when I look at that chart, I definitely be like "dang."  Lack of competition would explain a top-15ish defense year in and year out, but this dude's churning out the best defense in the country every year.  You don't do that without doing something right no matter who you're playing.

A question must be asked though; is this guy the defensive version of Rich Rodriguez?  Probably not.  Disregarding the whole "Michigan Man" thing which has really turned into a bunch of idiots who say things like "Dey Took 'ur Jeeeebs" Patterson has consistently - over 10 years as a head coach and 2 as a DC - shown the ability to put great defenses on the field.  This has been demonstrated over numerous "generations" of recruiting classes, and generally transcends having one or two great players.  He certainly fits Brandon's mold of "wanting the ball-boy to be defensive minded."  That said, what of the offense?

His offenses, while not as impressive as his defenses, have at least been competent, with these last two years (during which TCU has been most successful) verging on "great."  I would say that when you have the #1 defense in the land, the competency of your offense becomes a little less dire a need of, say, the 2010 Michigan Wolverines.  Patterson runs a version of the spread that would likely see Denard continue to play quarterback, should he choose to stay.  TCU has relied on their running attack, which features three different backs that hit with different combination's of speed and power, to fuel their offense this year.  All things even, Patterson would likely adopt the current Michigan offense pretty well while moving towards a more pass-oriented spread as Denard matures, and Gardner eventually fills in.

It's impossible to tell whether Gary Patterson would be successful in the Big Ten.  His record, especially defensively, is impressive, but so was Rodriguez's.  Like Rodriguez, Patterson has no Midwest recruiting ties, and no ties to the Big Ten Conference.  He has played and coached his career in Big XII territory.  He would likely bring in some ties to Texas recruiting, especially in the Dallas-Fort Worth area.

The situation is a little different from Rodriguez's as (at least I don't think) anybody outside of the TCU circle would blame him for jumping to Michigan from a mid-major.  It should be noted, however, that TCU is joining the Big East in July, 2012 [ed- yes, technically they're joining "next year" but they won't actually play a season in the Big East until the 2012-2013 season], and thus an auto-qualify conference for the BCS.  What's more is that TCU is primed to absolutely own that conference when they join.  Will Patterson want to take a step to a more prestigious yet definitely rebuilding Michigan program over a potential National Title run in the Big East?  It's definitely a concern, however, his "we'll cross that bridge when we come to it" response on the radio this morning seems like it might be an opportunity he'd listen to.  His salary and buyout are unknown, as TCU is private, but you'd have to assume Michigan could offer a top-10 salary after Brandon's comments two days ago.